Music Room: The Criterion Collection, The 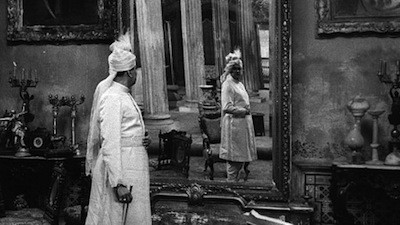 It's too bad Criterion didn't release their edition of Satyajit Ray's The Music Room at the same time they released Wes Anderson's The Darjeeling Limited. Anyone who has spent any time with the more recent movie's soundtrack will instantly recognize the song that opens The Music Room. Indeed, Anderson used lots of cues from older Indian films in Darjeeling, and the way he pays tribute to the melodies of Ray's home country is very much in keeping with the legendary director's own showcasing of Bengali music in his 1958 feature.

Fitting, too, that The Music Room thematically demonstrates the struggle between old and new, tradition and progress. Popular Indian actor Chhabi Biswas stars as Biswambhar Roy, a local monarch whose bank account has seen better days. Roy is addicted to music. Specifically, he is addicted to his music room, where he lounges with his hookah and hosts listening parties, hocking his wife's jewelry to pay for private recitals from popular acts. The music room is a status symbol, and so Roy's displays of wealth only escalate, especially when his new neighbor starts to offer him competition.

Mahim Ganguli (Gangapada Bose) is the son of a moneylender, and he has entered the family business. He pays a visit to Roy on the day the older man's son is supposed to have his initiation ritual. Roy could actually stand to borrow some money to cover the cost, but he's too proud to ask Mahim for the coinage. Mahim is seen as new money, someone who has to hustle for his purse. He doesn't have the aristocratic blood that the Roy family has. He also likes modern innovations, like electric devices for the home and cars. Biswambhar Roy rides a white horse and dresses up his elephant just to cross the street.

Things change drastically when tragedy strikes the Roy clan and the aging leader is left alone. He refuses to leave his house, and his station in life continues to decline as Mahim's rises. Neither is happy, though, because neither has what he really wants. Mahim is refused respect by the townspeople because of his less-than-noble birth, yet modernity is clearly here to stay and kings are outmoded. Like Burt Lancaster in The Leopard, Biswambhar Roy can see the world changing and moving past him; like Charles Foster Kane, he has locked himself up in a mausoleum full of things, a tribute to a life no longer lived and an attempt to prevent the future from arriving.

Satyajit Ray works his way patiently through the script, which he wrote based on a short story from Tarasanka Banerji. The Music Room flirts with melodrama--the deaths in the Roy family bring the weightiest emotions; insects show up throughout the film, serving as insidious omens--but Ray restrains himself. The social changes are represented in gesture and decoration. How the two men carry themselves and the way Biswambhar Roy's house starts to fall apart, and even how his servants address him, say enough about how heavy the crisis really is. Even what the two men choose to smoke speaks volumes. Roy uses the hookah, and he calmly inhales his tobacco; Mahim begins by inhaling snuff, but eventually turns to cigarettes, and each says something about who he is and his position on the social ladder. As actors, Biswas and Gupta complement one another. Biswas' performance is more interior, and his reserved posture gives away to physical fragility as the film progresses; meanwhile, Gupta is less mannered and more twitchy, not quite method but almost comedic.

The plot of The Music Room regularly pauses for the musical performances. Ray gives the featured musicians full scenes so they can perform complete songs. In the film's final act, we don't just get music, but dancing as well. It's a special sequence, with Ray using the dance to show the hypnotic power of performance and how music could equalize the two rivals if they would just acknowledge the shared experience. It's ironic, because as much as Roy uses music to bring together his friends, and even though he is clearly moved by the rhythm and melodies, he has long since ceased to give any credence to the way a concert or a popular song can remove personal or even class barriers. Anyone can enjoy a good tune, but I guess only a rich man thinks he can buy it for himself.

The moment to see the error of his ways comes and passes, and the petty victory the fading aristocrat seizes instead does him little good. Honestly, seeing the missed opportunity moved me more as a viewer than the aftermath, which was still powerful despite being more predictable than the material that had preceded it. Then again, there is no other way for The Music Room to end, the march of time must stamp out all that came prior. The old saying "this too shall pass" is meant to be comforting, to suggest that bad times will eventually end, but it applies to all of us as individuals, as well. One day things will change, we'll have aged, and we'll find ourselves on the other side of the line. It may be that the culture has changed simply and quietly and we can carry on or adapt, or it may be the kind of invisible violence that alters the world so drastically, someone like Biswambhar Roy won't survive the metamorphosis. Either way, we too shall pass. 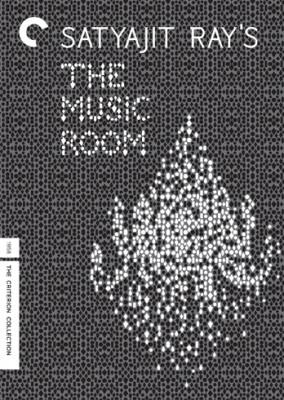 Video:
Criterion has released The Music Room on Blu-Ray as a 1.33:1 full frame transfer. The high-definition black-and-white image is a solid restoration, though not free from blemish. Though the overall picture quality is clear, there is persistent scratching on the image frame, and its pervasiveness would lead me to believe there just wasn't better source material to work with. (Indeed, Scorsese's team worked on this, so that's a safe bet.) You have to wonder what the print originally looked like, and how much of a miracle may have actually been achieved. For whatever they couldn't do, we should acknowledge how well the restoration crew and production staff executed the things they could: there is no indication of digital error, no noise reduction or edge enhancement, and the balance between light and dark is very good. It's a solid presentation, hands down, and the photography is always visible, never obscured.

Sound:
The uncompressed monaural soundtrack preserves the original Bengali audio and presents the dialogue and music in a clear fashion, with no hiss or distortion. The music sounds very good, and there is no massive shift when we move in and out of the performance numbers and back to the dialogue; the soundtrack when there is no music is very quiet, and the audio team has managed to make the silence sound natural.

English subtitles are presented in white and are easy to read, and they can be turned off.

Extras:
The Music Room comes with an extensive supplemental booklet, featuring credits and photographs, as well as a new critical essay and vintage material from Satyajit Ray: an essay from 1963 about where The Music Room was shot and a 1986 interview focusing on the music.

The main bonus on the disc is a two-hour documentary titled Satyajit Ray, made in 1984 by filmmaker Shyam Benegal. Featuring extensive involvement from the subject, it explores Ray's life from birth to his start in movies and all the way to what was then the present day. It's a complete portrait, and offers much to aid fans in further understanding the artist's point of view. Of particular interest is seeing him at work on the set of The Home and the World and also the illustration work he did as a young man, before he got into movies.

Rounding out the Blu-Ray are shorter pieces: interviews with biographer Andre Robinson (17:30) and filmmaker Mira Nair (15:45) discussing their appreciation of Ray and The Music Room and the movie's greater impact. Also illuminating is a 10-minute clip from a 1981 French television segment with Ray sitting down to discuss the movie. It's interesting, because it was on the eve of the film's first theatrical engagement in France, even though some time had passed since its original release in India.

FINAL THOUGHTS:
The 1958 film The Music Room was a breakthrough for Indian filmmaker Satyajit Ray. The slowbuilding drama accumulates emotion as its story of an aging monarch who is losing his grip on his personal life and his class position both celebrates the solace and comfort music provides while also showing the perils of ignoring these benefits. The Blu-Ray of the movie presents the film in its best and most accessible package, and it also adds healthy extras to introduce viewers to Satyajit Ray. Highly Recommended.