Beauty and the Beast: The Criterion Collection


Please Note: The screengrabs used here are from the standard-definition remastered DVD released in 2003, not from the Blu-Ray. 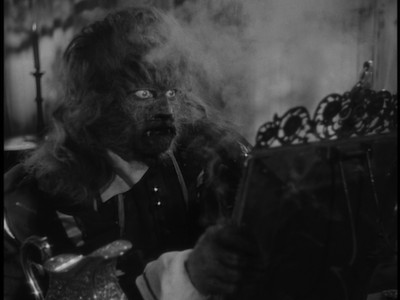 Plenty of filmmakers and artists believed in the magic of cinema, but few dabbled in it the way Jean Cocteau did. From his earliest efforts, including his revered Orphic Trilogy, he experimented with the possibilities of special effects and camera trickery to create indelible filmic illusions. While some of his tools may seem old hat today--he regularly ran his film backwards, used mirrors, double exposure, etc.--we can't forget how new the form still was when he jumped into the fray, trying anything and everything with gleeful abandon.

Of all his films, though, none has as much enduring magic as Beauty and the Beast. Released in 1946, it is a potent and meticulously realized cinematic fairy tale. Working from the original story by Mme Leprince de Beaumont, Cocteau invents a whole other plane of existence, one he invites us into with a typical storytelling incantation, "Once Upon a Time..."

Most of us know the story of Beauty and the Beast. In the French countryside, a once wealthy merchant (Marcel André) is struggling to keep his family out of the poorhouse, efforts disrupted by his fun-loving son Ludovic (Michel Auclair) and his selfish daughters Félicie and Adélaïde (Mila Parély and Nane Germon). His only devoted child is Belle (Josette Day), and though her sisters judge her harshly, the merchant at least sees that she has the family's best interest at heart. No overtones of Lear here; this daddy doesn't waver in his love for Cordelia. That's why when she asks for him to bring a rose back from his next trip, he more than willingly agrees.

Too bad he picked the wrong garden to snatch it from. The merchant wanders into an enchanted estate, one owned by the cursed Beast (Jean Marais, who also plays Belle's suitor, Avenant, a duality that will become thematically important when you watch the film). This Beast doesn't take kindly to anyone stealing any of his treasures, no matter how small. In exchange for his life, the merchant must send one of his daughters to stay in the Beast's mansion. Belle insists on sacrificing herself, since the offending rose was for her. She goes fully expecting to die, but instead, the Beast gives her a life of luxury. Each night, he feeds her a banquet and showers her with gifts and proposes marriage, hoping one day she will learn to appreciate him and say yes. He is a man at odds with his own nature. The human inside the furry form has love and compassion to give, but the animal instinct that comes with his transformation stokes a primal fire deep down.

The plot is simple, but effective. It has endured for a reason. Beauty and the Beast speaks to fundamental human desires: to be loved for who we are, and also to conquer our true nature. Whether you believe that man is born good and learns to be bad, or vice versa, most of us struggle in the day to day to do the right thing. Beast represents that common conflict, and though his outward appearance suggests the more primitive side is losing, his treatment of Belle proves otherwise. The outcome of the fairy tale is to prove this, partially by showing that even those who possess great beauty also lack the purity that is often ascribed to them. It's all in the eye of the beholder, as they say.

Like the best fairy tales, Cocteau's wraps its message within glittery trappings. Beauty and the Beast is a marvelous movie. Cocteau invents his own dimension, working with an army of art directors and costume designers to establish a mystical realm where the cursed Beast resides. From the lush garden with its ornate statuary to the deepest recesses of his mansion, every inch is packed with something interesting to look at. The most famous sequences feature a long hallway where human arms serve as candelabras and the stone busts come to life. (And perhaps these human objects are a symbol of how each and every one of us is enslaved to our own similar beastly compulsions.) The Beast himself is an impressive creation, a combination of costume and make-up, with glowing eyes and a smoldering body that regularly emits smoke, particularly when the creature has been on the hunt. It's not perfect, particularly not to modern eyes, but it's more convincing than the combination of computer animation and the rudimentary costume on the similar Beast in this year's X-Men: First Class movie. There is also a warmth to Cocteau's other world that is lacking in the sparkle of modern effects-laden films. It's one of the reasons I'm no fan of the cloying Disney version of this story. Their early use of CGI in some of the cartoon sequences is jarring rather than enchanting, and the songs are execrable. (Yeah, I said it. Find the link for the hate mail, go ahead.)

The same can't be said for the music in Beauty and the Beast's alternate audio track, a full opera composed with the movie's dialogue by Philip Glass. I know this might be considered sacrilege to some, but I prefer to watch Cocteau's film this way, with all the dialogue sung and the constant presence of the orchestra. It adds to the otherworldliness, abstracting the piece further, so that I am truly somewhere other than the presentation space. I find Glass' music profoundly moving, and it gives even more cosmic heft to the movie's dreamy finale.

Sometimes it's hard to imagine what kind of space must have existed to allow a film like Beauty and the Beast to happen. Cocteau's undertaking must have sounded crazy, particularly in post-War France, when resources were scarce. (The movie was shot on several different film stocks, because the director had to use whatever was at hand.) It must have also seemed frivolous when compared to, say, what was happening in Italian film, which was going in the opposite direction. And yet, the affirmation that comes at the conclusion of Beauty and the Beast, that man can conquer the evil inside and love and good will out, must have also seemed tremendously comforting, validating the escapism the movie provided--and continues to provide. If you trust Cocteau at his word, and accept his invitation, you will be transported and possibly even transformed by watching his romantic fable.

Video:
Beauty and the Beast was first restored in 1995, and with each successive home video release (this is their third), Criterion manages to up their own game. The BD of the 1946 film, shown at a 1.33:1 aspect ratio in black-and-white, is magnificent. Tonal values are pronounced and expertly rendered, the blacks go deep, and the surface grain preserves the look of the original film without distracting from its foggy landscapes. One always worries that more clarity might dim the power of the effects work; it often can expose the cracks and seams. Not so here. I found the clever creations to be more effective than ever. In fact, seeing the incredible level of detail, which is now sharper and deeper than even on the stellar 2003 reissue, just makes Beauty and the Beast all the more enchanting.

Sound:
Two alternate audio tracks are offered here. The first is Cocteau's original, which is presented in an uncompressed mono. It sounds great, with nice tones on the dialogue and no extraneous sounds in the quieter scenes.

The true gem of this edition, however, is the 5.1 DTS-HD Master Audio with Philip Glass' La Belle et la bête. The fully orchestrated opera fills every speaker, sounding rich and textural, and fully enveloping the viewer in an ocean of melody. Sound effects are few, but they are mixed in with care. The birds heard chirping in the background on the morning when Belle sneaks off to see the Beast, for instance, are layered in the mix to create the illusion of depth, to add a touch of realism to the fantastical.

The are different subtitle choices for both tracks.

Extras:
Collectors should note that this edition of Beauty and the Beast almost exactly matches the 2003 version Criterion put out (which, technically, was their second edition). All of the extras are carried over from that version, with the only difference being in the accompanying booklet. Essays shared between the two editions are the "Once Upon a Time" article by Cocteau and the excerpts from the Francis Steegmuller biography of the director; missing is the printing of the original French fable by Mme. Leprince de Beaumont, which is kind of too bad. Replacing it are a new critical analysis by Geoffrey O'Brien. Also, Philip Glass' introduction to the opera version is now in the book instead of being on the disc.

The remaining on-disc extras are as follows:
* Two audio commentaries: one by film scholar Arthur Knight, and another by cultural commentator Sir Christopher Frayling. You would think this would be overkill, but both offer an interesting perspective on the film, providing a different approach. Give each a listen when and if you get the chance.
* Screening at the Majestic, a 1995 documentary gathering cast and crew to discuss the film on the occasion of its restoration.
* Interview with cinematographer Henri Alekan, a separate piece discussing shooting the movie.
* Behind-the-scenes photos and publicity stills.
* Two trailers: Cocteau's original, which he cut and edited, and the 1995 restoration trailer.
* Restoration demonstration.

FINAL THOUGHTS:
Jean Cocteau's 1946 version of Beauty and the Beast is a bonafide classic. Few films can transport the audience to another land in the same way it does. (Wizard of Oz, perhaps?) The fairy tale world the irascible artist creates is complete and utterly convincing, and the masterful restoration presented here in high-definition only improves its power. The whole package is remarkable, complete with informative extras and a wonderful alternate audio track featuring a full opera by Philip Glass. This is a must-have Blu-Ray. DVD Talk Collector Series. 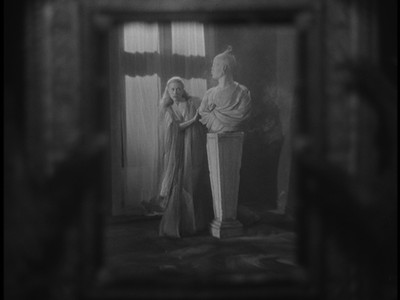