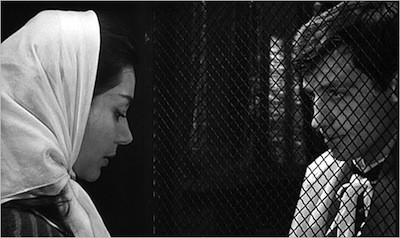 When I was growing up, my sister, who is five years older, was obsessed with The Thorn Birds, a book and later a television miniseries about a priest who gives in to his carnal desires to have sex with a hot Australian woman. It was sort of like the Twilight of its day, with a frock and collar taking the place of sunshine twinkles and sparkles.

I can only guess what my sis might have made of Jean-Pierre Melville's 1961 movie Léon Morin, Priest, a wartime drama about a devout priest resisting the women on his flock. Melville adapted the film from a novel by Béatrix Beck, and his creation is a respectful study of the seriousness of faith and the meaning of temptation. It deals with religious conviction honestly, while exploring the philosophy of belief and its meaning in our everyday struggle.

Emmanuelle Riva stars in Léon Morin, Priest as Barny, an office worker making her way in a rural village in occupied France in World War II. Barny is a communist who had a child with a Jewish man, and she is part of a group of women with similar circumstances who work together to hide their dangerous connections and protect their offspring. This includes having their children baptized in the Catholic church to get them legal certification. On a whim, Barny decides to taunt one of the priests by going into the confessional and challenging him with her atheism. She is no match for Father Morin, however, a stalwart man of the cloth who doesn't let much rattle him. He is played by Breathless star Jean-Paul Belmondo in a role that is as far from the would-be hood that made him famous as he could likely get. Those more used to the visceral, devil-may-care Belmondo might be surprised to see him all buttoned-up; the only recognizable element of the matinee idol's performance is his physicality. Father Morin is comfortable in his body, regularly making physical contact with his parishioners, be it a light touch or a forceful shove.

This kind of connection eventually affects Barny, whose weekly talks with the priest lead her to question her lack of faith and to come to terms with some of her decisions and impulses--including a crush on a woman in her office (Nicole Mirel). Father Morin explains the appeal of this lady as that of authority; the men Barny's age are off fighting the war, so any figure of power will seem attractive. This is a self-fulfilling prophecy as Morin comes to have more influence in the woman's life. Eventually, Barny comes to accept Catholicism, and though there is no reason to doubt her sincerity, there is cause to wonder if she isn't experiencing some displacement. Could her newfound love of God really be a manifestation of her love for Léon Morin?

Melville's movie follows a fairly straightforward plotline. It covers a lot of temporal ground: by movie's end, the Germans will be driven out by the allies and life will return to a semblance of normalcy. This would not be the only time Melville would work with a narrative set in Vichy France. One of his best movies, Army of Shadows, is a powerful tribute to the resistance forces that operated in the French underground; in Léon Morin, Priest, some of these elements are just background, but Morin's strident political beliefs do cast him in a heroic light, especially in relation to one of Barny's co-workers, a woman (Irène Tunc) who has chosen to collaborate with the Germans rather than stick her neck out for the Jews.

Despite the straight narrative line in the script, Melville structures his movie as a series of vignettes, building the full story out of individual scenes and absent of the usual connectors. The director and his editing team regularly fade to black between these segments, indicating passing time but also punctuating the moment. Barny narrates much of her own story, and the impression this technique creates is that we are witnessing snippets of her memory. This is how her wartime experience comes back to her: brief snatches forming a mosaic of history. Emmanuelle Riva is very good in the lead, balancing a girlish precociousness with the heavier responsibilities and lessons of adulthood. Her coming to God is a bit of a coming-of-age tale. She must reject the foolishness of youth in order to raise her daughter and cope with post-War life.

And, of course, her final youthful folly is her crush on Father Morin. It would have been so easy for Melville to take the predictable path. Even sixteen years prior to The Thorn Birds, audiences were likely expecting Léon Morin to renounce his priestly oath and take Barny as his lover. (And given how sexy Belmondo was, they also probably wanted him to, perhaps even more than they expected him to.) To his credit, Melville doesn't even take the easy path when going with the alternative. Morin doesn't react with perfect grace, nor does he chastise Barny with patronizing platitudes. His actions are tougher than that, leading to a powerful ending that will take you by surprise. Like a sucker punch, though with so much more reach than the cheap shot such a phrase implies. 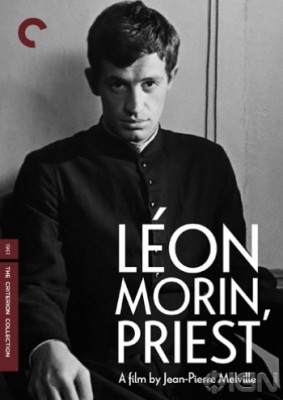 Video:
Criterion's 1080p widescreen (1.66:1) transfer takes great care to preserve Henri Decaë's beautiful black-and-white photography. The high definition image on the Léon Morin, Priest Blu-Ray is absolutely pristine, with strong black levels and a nice balance between dark and light. Each frame is detailed and deep, with absolute clarity given to all different aspects, foreground and background. There are some remarkable shots in the film, including a great use of realistic sets. Morin's rundown lodgings in particular have a lot of textured surfaces, and Melville and Decaë's careful use of light and shade is amazing to observe and admire. Take special care to notice, for instance, the scene on the stairway with Barny at the bottom and Léon at the top. His shadow on the wall falls at a spot where paint damage adds a mask-like element to his projected face, giving physical manifestation to Barny's perception of him as something other than what he appears.

Sound:
The uncompressed mono French soundtrack adheres as close as possible to the original nature of the audio. It's a clean track, with nice volume modulation and no instances of hiss or pops or any other glitches.

The subtitles are easy to read, both in terms of placement and pacing.

Extras:
Léon Morin, Priest comes in a standard-sized Criterion Blu-Ray case with a 28-page booklet full of photos, credits, an essay by Gary Indiana, and excerpts from a 1970 interview with Jean-Pierre Melville.

Melville is also interviewed on the disc in a vintage appearance from French television that features the filmmaker chatting alongside his star, Jean-Paul Belmondo (this snippet is less than five minutes). Also short are the included deleted scenes (two in total, also not quite five minutes) and the movie's original theatrical trailer.

In lieu of a full-length commentary, Criterion has film expert Ginette Vincendeau discussing the film and its technique over a select number of scenes--three different sections, covering about a quarter of Léon Morin, Priest.

FINAL THOUGHTS:
Léon Morin, Priest is a well-crafted, though unexpected, drama from Jean-Pierre Melville. The French master trades the inner lives of gangsters for something more spiritual: the relationship between a struggling atheist and her priest in occupied France. Jean-Paul Belmondo is assured and confident as the title character, helping the woman become more content with her life philosophy, while also providing her with a source of temptation for those newfound beliefs. Léon Morin, Priest doesn't go into predictable territory, making for a deeper narrative than we would have gotten from a less accomplished filmmaker. The Blu-Ray restoration is also appropriately amazing. Highly Recommended.