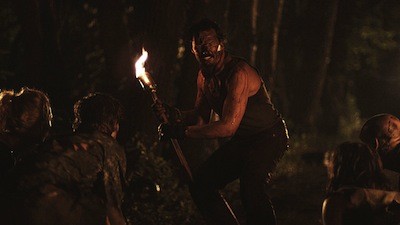 Let's get it straight: when a lot of us say we are sick of vampires and/or zombies, what we really mean is we are sick of trendy cash-ins that think a pair of fangs and a funny walk a good monster make. There is nothing inherently wrong with either creature, nor are stories about them all played out. We just want those stories to be good.

Jim Mickle's Stake Land is good. It's not great, but that's okay, they need not all be genius. Stake Land is entertaining, and it has a solid story, and despite the characters all being types, I actually cared if they lived or died. The villains are vampires, but this post-apocalyptic road trip is more like a zombie picture than your usual bloodsucking actioner. In fact, it's a whole hell of a lot like Zombieland, but the serious version, minus the jokes. Both films feature a nervous young boy teaming up with a badass, experienced killer to search for a fabled paradise somewhere far away from the curse that has decimated life as they knew it. Stake Land even has some po-faced, Herman Melville-styled voiceover in place of the comedy rules of survival. So, if you liked Zombieland but wanted a little more gristle, this is the movie for you.

Gossip Girl's Connor Paolo stars as Marvin, a teen whose family is taken from him on the night that they were going to make a run for New Eden, the safe haven to the North. Marvin is saved by Mister (Nick Damici, who also co-wrote the script), a wandering vampire hunter who starts training the boy to do what he does: murder vamps and take their fangs. Mister has designs on getting to New Eden, as well, but he plans to leave a lot of bodies in his wake.

Stake Land is essentially a wasteland travelogue, as the pair make their way through rundown, desolate settlements in search of solace. They pick up various passengers on the way--a nun, a pregnant girl, an ex-marine--but the story is theirs. Things grow particularly hot for the two when Mister pisses off the Brotherhood, a group of white supremacists who believe God has sent the vampires to purify the land for true Aryan believers. These backwoods zealots are actually a bigger threat than the undead, and one in particular will dog their journey north. Jebediah (Michael Cerveris) has personal designs on Mister's scalp, and they will trade blows more than once. In between, Marvin will learn some new fighting techniques and also the ways of the world. Expect him to fall in love more than once. 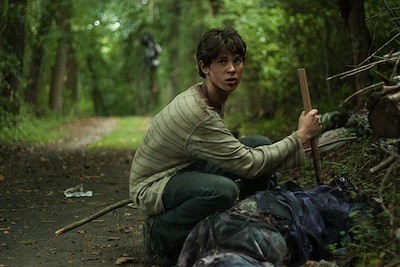 Stake Land is an efficient B-picture with a strong ensemble cast and pretty good splatter effects. Don't go in expecting scares, because it doesn't really have any. This is more of an action picture than it is a horror movie. Mickle and his teams, previously known for a film called Mulberry St., spread a lot of blood and guts around, utilizing the American landscape and its hollowed-out villages to create a world where everything has gone wrong and there is no turning back. If you wanted to, you could probably even read a little socio-political commentary into the proceedings. I don't think Mickle pushes it too hard, but it's there. He and Damici have too strong an aversion to exposition to get too deep into anything like that--even if their ponderous narrator has a tendency for high-school philosophizing.

Stake Land isn't a perfect movie. Sometimes the filmmakers cut away from a scene just when you're about to see what you really want, and they probably should have stopped the movie five minutes before they actually do. It's also not particularly original--Zombieland was just the first of many other, better movies that came to mind. Even so, its imperfections are easy to look past; they are part of the independent, let's-go-make-a-movie spirit that courses through every frame. This is one you go to for the exploding heads, anyway, leave the speechifyin' and the overwrought romance to other vampire flicks. When those films pause for breath, Stake Land will nail them right through their bleeding hearts. 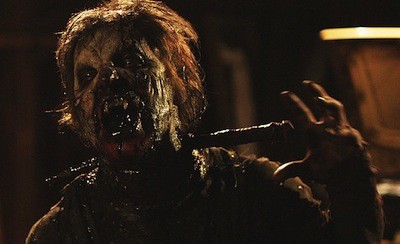