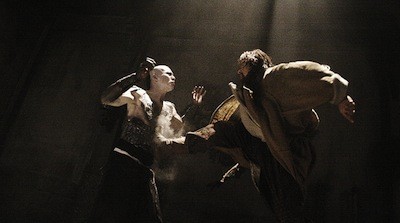 Yuen Woo Ping is known to most moviegoers as the stunt coordinator for such big-budget action films as The Matrix and Kill Bill. His combat choreography and influential wire work brought Chinese fighting styles to Hollywood motion pictures. Woo Ping is also a director, though his new effort, True Legend, is his first since 1996, so it's easy to forget that he makes films himself.

True Legend is both good and bad, depending on what you want out of your kung-fu flicks. It's bad if you have any interest in your fighting movies having a good story. True Legend has a very basic plot. Su Can (Vincent Zhao) is a Wushu fighter with a noble heart. His father is a respected warrior who once defeated and killed the evil master of the Five Venom Fists. When he did, he adopted the bad guy's children, a son named Yuan (Andy On) and a daughter named Ying (Xun Zhou). Su took Yuan as his little brother and eventually married Ying, but both actions only bred resentment in the hotheaded boy. After Yuan mastered his old man's deadly fighting style, he killed his adopted father, maimed his half-brother, and kidnapped his nephew, Little Feng. The bulk of the film is Su getting his confidence back and rescuing the boy from his deranged uncle. 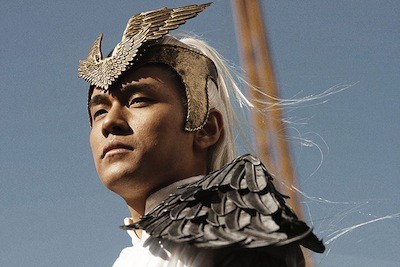 Luckily, at least 80% of True Legend is combat, and so the film moves swiftly. The actual fight sequences go on pretty long, and a lot of the sparring is really entertaining. I prefer the showdowns that rely more on actual stunts, True Legend tends to sputter when Woo Ping uses too much digital enhancement. I don't mind the wire work or even the unnecessary slow motion, but the computer generated weapons and greenscreen backgrounds are poorly integrated into the real action and detract from the illusion. The only time it really works is when Su fights the God of Wushu (Jay Chou from The Green Hornet) on a mystical plane. It's supposed to look weird and otherworldly, so mission accomplished. Chou is also in True Legend's best action showcase, when he appears again as the Drunken Master. The script for True Legend by Chi-long To has a weird structure, it's almost two movies. 2/3 in, the drama with Yuan is over and the movie shifts into a completely different direction. Su, having now become a wino, ends up in a fighting arena battling American wrestlers to the death. David Carradine appears briefly in one of his final roles, playing the leader of the foreign fighters.

I suppose if True Legend is the type of movie that naturally interests you, then you will actually enjoy it. If you don't have an automatic desire to see a kung-fu movie, then this is not a film for you. (In other words, it's not Crouching Tiger, Hidden Dragon, there is no appeal outside of genre devotion.) Yuen Woo Ping knows how to put a fight together, and there are a lot of skirmishes to be seen in True Legend. Apparently some cinemas will be showing this movie in 3D, but the screener I watched didn't have these effects. I would say skip the added dimension if you have the option, my gut says it will just make the action look more confusing. In which case you can also just wait and watch it at home and not have to worry about the box office upcharge anyway. 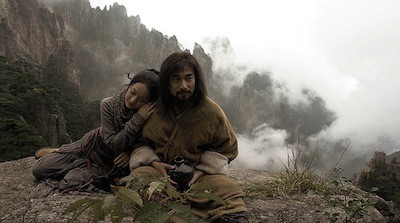