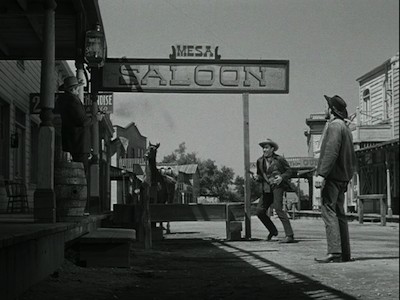 Man from Del Rio begins like any hundred or more westerns you can likely name. A dusty gunslinger wanders into a strange town. There he confronts someone who did him wrong, whom he has been hunting across the dirty American West, and they have it out in the street. Since the first guy got his revenge at the start of the picture, that means there will be some kind of fallout to his action. The rest of Man from Del Rio will be about what happens after the bodies fall. And that's where it gets interesting.

Anthony Quinn stars in Man from Del Rio as the victor of that first gun battle. Though most folks think Quinn is Greek, he was actually born in Mexico, and so playing Dave Robles gave the actor a chance to return to his ethnic heritage. Dave has spent the last five years learning how to be a quick-draw artist in order to punish the men who shot up his hometown. The one he kills here is the last, and it turns out that this bad dude had been invited to the area by the saloon owner Bannister (Peter Whitney), who needs a hired thug to help him turn the sleepy burg into a one-stop den of sin. Bannister offers Dave the job, but Dave likes the town's offer better. They want him to become the sheriff and get rid of Bannister.

Dave puts on the tin star, but he doesn't fall into the role easily. His willingness to let the saloon stand as it is immediately annoys the townspeople, who already don't really respect Dave. It's okay having a Mexican working for them, but they have no intention of accepting him as one of their own. Racism runs just under the surface of everything in Man from Del Rio, even the outlaws were ready to discount Dave, thinking him incapable of being as good as he is until he proves it. The new lawman's outcast status is seemingly balanced out by how the locals have embraced Estella (Katy Jurado from High Noon), the maid who works for the neighborhood doctor (Douglas Fowley). While Estella gets to dance with the village men, Dave is left outside to drink with the town drunk (an excellent performance from Whit Bissell). The fiery courtship between Dave and Estella is a struggle to reconcile his street-fightin' ways with her peaceful co-existence; alternately, it can be seen as his insistence that he stay true to who he is and she does what it takes to get along.

Man from Del Rio is written by Richard Carr (Hell is for Heroes) and directed by Harry Horner (Beware My Lovely), and in most of its aesthetic choices, the 1956 film is your standard B-grade cowboy picture. The pacing is often plodding and the camerawork simplistic. In a brawl between Dave and Bannister, the use of stunt doubles is pretty obvious, if for no other reason than Quinn's stand-in has a full head of curly hair. As far as the mechanics go, Man from Del Rio is entirely forgettable.

What makes it worthwhile, though, is how the gifted actors handle the progressive themes of the material. Jurado delivers an unremarkable performance, but Quinn more than makes up for it with his manly, guttural portrayal of the central character. He stalks through the movie, tossing his weight from scene to scene, physically representing the "other." He is a hulking specimen, while the white actors are all stuffed shirts. Only Bissell holds his own with Quinn, transforming the typical rummy role into something far more devious and skeevy. Their tango builds to an unexpected climax, one that is surprisingly clever and that vindicates the Mexican, who proves he's not only more deadly and agile than anyone gave him credit for, but smarter, too. 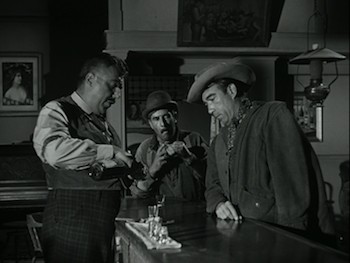 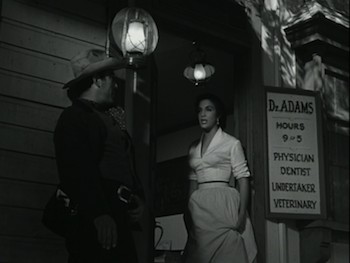 Video:
Man from Del Rio is part of MGM's Limited Edition Collection, a movies-on-demand program that presents lesser-known titles at a premium price with no frills. This is basically the studio meeting the consumer halfway: taking movies that won't necessarily have mass appeal and saying, "If you order it, we'll make a copy just for you." The disc is blue-blacked, CD-R format.

The full frame image for Man from Del Rio is pretty good. The print has a couple of specks and scratches, and one big glitch where a wavy blob appears on screen for about 10 seconds midway through, but it's otherwise decent. The picture doesn't shake, there are no jumpy edits, and the resolution is solid.

Sound:
The Dolby mono mix is well done with no hiss or crackles. The tones are clear and everything is easy to hear.

FINAL THOUGHTS:
Recommended. A low-grade cowboy movie transcends its meager beginnings with a script that challenges racial prejudice and a visceral performance from Anthony Quinn. In terms of shooting style and narrative mechanics, the 1956 western Man from Del Rio is nothing special, but there is just enough going on under the surface to make this minor B-picture rather interesting. It doesn't go everywhere you think, and Quinn is formidable to watch. 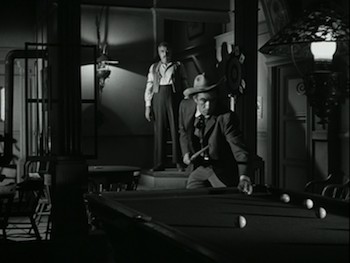 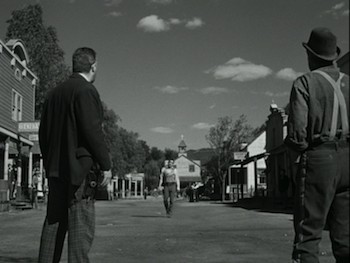