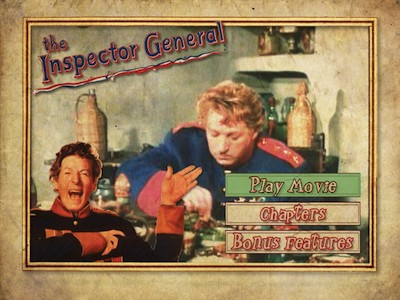 Once upon a time, Danny Kaye was a huge international star, and when you watch a movie like the 1949 musical comedy The Inspector General, there's really no mystery as to why. The performer sings, dances, cracks jokes, makes faces, is kind to animals and respectful to women, and to top it off, he's really good at each and every one of those things.

Even if the movie is not all that great.

The Inspector General was directed by Henry Koster, the same guy who gave us Harvey and The Bishop's Wife. Based on a play by Nikolai Golgol, it transfers the mistaken identity plot from 19th-century Russia to an unspecified place, somewhere in Europe, probably in France judging by the Napoleon references. Kaye stars as Georgi, a gypsy with an honest heart who has nowhere to go after he exposes his boss' miracle tonic for being wholly unmiraculous. He wanders into an impoverished backwoods town where the mayor (Gene Lockhart) and his police force (father to the Skipper himself, Alan Hale, is chief) overtax the civilians and keep the spoils for themselves. Though they first spot Georgi as the bum he is, panic sets in when they realize he could be the Emperor's emissary in disguise. Georgi is sprung from jail and made the toast of the town. He is romanced by the mayor's wife (Elsa Lanchester, a.k.a. the Bride of Frankenstein) and bribed by nervous officials. He is also reunited with his gypsy pal Yakov (Walter Slezak), who wants in on the grift. Oh, and there is a pretty maid (Barbara Bates) who likes Georgi, and he likes her, too.

I never saw The Inspector General as a kid, despite it being in heavy rotation in syndication. I write often of the weekend afternoon movies I used to watch on Channels 5 and 13, KTLA and KCOP, in Los Angeles. It's how I got a large portion of my early cinema education, including seeing my first Humphrey Bogart, Marilyn Monroe, and Stanley Kubrick movies. I got pretty hip to their scheduling practices, and I knew favorites like Mad Monster Party would generally pop up twice a year. They showed a lot of Danny Kaye movies, too, but I never watched a single one of them. It's hard to say why now. Something in my young brain just thought they looked dopey. And maybe I was right.

Or maybe I wasn't and I'd react differently to seeing The Inspector General now if I had spent any time with it--or any Danny Kaye flick, for that matter--way back when. Maybe nostalgia would add some more attractive colors to the experience, I don't know. Seeing The Inspector General in my late 30s left me cold. Call me cynical and jaded, I don't care, but the movie hasn't aged well. It's milquetoast family stuff, with corny jokes and a hackneyed plot. Maybe if there was an edge to the script, some kind of subversive streak in the story, a touch of humor aimed above kid's heads, something bawdy for dad to enjoy, I'd have felt differently. There isn't even much of a message here. If you want to entertain and lift the soul, great, but you need a little soul yourself.

Nope, there's none of these things, so it's hard to make my mental time machine work and get into the spirit of this antiquated relic. The Inspector General is the very definition of safe. Everything here is designed to make Danny Kaye seem likable...and in that, the movie works. I like Danny Kaye a lot. His facial contortions and well-meaning clumsiness made me laugh, even as the rest of the film left me bored. There's nothing wrong with The Inspector General, I can't pick apart the craft--the songs are melodious, the costumes are colorful, the supporting players give it their all--this particular film just isn't for me. It's puffery from a bygone age, which can make for fine viewing when there is something exceptional about the work. Danny Kaye aside, there is not. Not unless you're either very young or very old, I guess. Wrong time for me to be a middle-aged grouch! 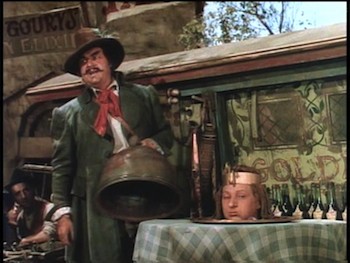 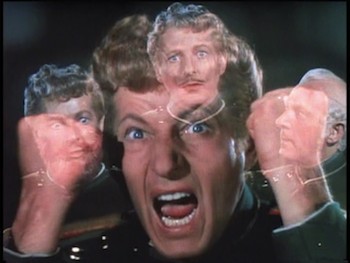 Video:
Insult to injury time: the image transfer on Shout! Factory's The Inspector General: Collector's Edition DVD is not very good at all. The full frame image underwhelms with muted colors and consistently poor resolution. Edges are soft, and there are lots of jagged lines, particularly in the background details. The print regularly has dirt and scratches and cue marks. The cover boasts that the movie has been remastered for this DVD, which makes me wonder how bad the various discs out there that have used public domain materials must be, because there is very little here that looks like it has been given much attention at all.

Sound:
The one-channel soundtrack fares better than the video image. There isn't much warmth or depth to the audio, but it is all clearly rendered without any glitches or glaring distortion.

Extras:
Danny Kaye fans will be pretty thrilled with the two bonus features. First there is 17 minutes of color home movies shot by director Henry Koster showing Kaye and his costars hanging around the set. The footage is narrated by Robert Koster, the director's son, who provides some background detail on what we're seeing.

This is followed by an 18-minute short film from 1938 called Money on Your Life. This black-and-white comedy features Kaye as a marked man who falls in with an insurance salesman (Charles Kemper) who tries to keep Kaye alive so he doesn't have to pay out on his insurance policy. It's got some amusing bits, though Kaye is still seemingly learning the ins and outs of performing on film, as he is far more stiff here than he would be a decade later in the main feature. Historian Bruce Lawton provides an informative optional audio commentary for Money on Your Life, as well.

Shout! has released this Collector's Edition in a clear plastic case to make use of the reversible cover. You can flip it around and pick which vintage poster design you prefer.

FINAL THOUGHTS:
Oh, this is tough! I'm just shy of saying you should pass this up completely. The Inspector General: Collector's Edition is a not-very-good DVD release of, really, what is not a very good movie (at least for me; I know plenty of you will disagree). This whitebread musical features Danny Kaye in a pretty standard comedy of errors, and most of it struck me as dull and predictable. Danny Kaye is a great performer, however, and it seems like all movie fans should at least have some kind of an idea of why his fame is so enduring. I don't know if there is a better vehicle than The Inspector General for getting to know Danny Kaye out there (I actually liked On the Riviera more), but you could at least Rent It and see it for his song-and-dance numbers. 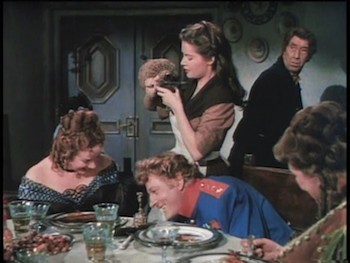 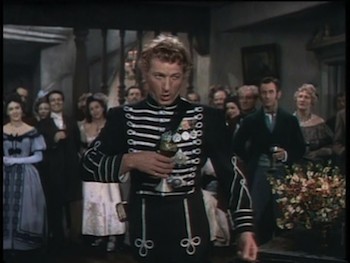