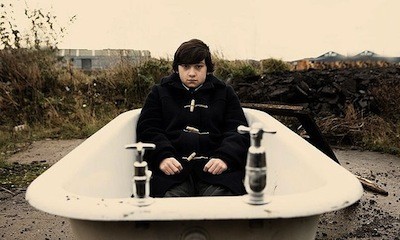 Oliver Tate is a boy growing up in Wales in the mid-1980s. He has a heavy sailor's overcoat befitting his seaside locale, but with his shaggy haircut, it makes him look like something off of a cover of a 1960s record album. He also looks a little like Bud Cort from Harold and Maude, a happy coincidence, for sure, since Hal Ashby's movie has a heavy sway over Submarine. Replace Cat Stevens songs with new numbers from Arctic Monkeys-frontman Alex Turner, make the romance more age appropriate, and you've got a pretty good idea what Submarine is like.

Which is to say that Submarine is very good. We can all use a little more Harold and Maude-like vibes in our lives.

Twenty-year-old actor Craig Roberts takes the lead as Oliver, an imaginative adolescent with adolescent concerns: mortality, infamy, and girls. Oliver daydreams the movie of his life and then outlines meticulous plans to make those fantasies come true. Dream #1 is Jordana Bevan (Yasmin Paige from "The Sarah Jane Adventures"), a cute gal who likes the occasional riot. Oliver will resort to being a bit of a bully to prove to her that he's a bad boy and win her heart. Though, surprisingly, little note is made that his slightly old-fashioned chivalry does the job a bit better. For all his modern pretensions and desire to be different, Oliver does have a love of cliché. Most of his amorous efforts could have been cribbed from old movies and soap operas. He stares at the sea like a Byronic hero because he saw a film that asserted this is what great thinkers do. Still, no big answers seem to come back from the emptiness.

Oliver's young life is complicated by a growing distance between his parents. Sally Hawkins plays the mother, Noah Taylor plays the father. She once wanted to be an actress, but now works in government administration; he is a marine biologist whose mind is always somewhere out at sea. It's his chronic depression that lends Submarine its title. He describes the mood as being akin to submersion, and Oliver will begin to experience some of that himself. Wes Anderson fans will have a hard time not thinking of Taylor's time on Team Zisou playing Vladimir Wolodarsky when they see him enthuse about lost sturgeons and how far down the ocean goes. Actually, Wes Anderson came to mind as much as Hal Ashby when I was watching Submarine. The cutaways and schematics of actual subs are just one familiar part of the film's expository montages; the formalistic framing and quirky voiceover bring up memories of not just The Life Aquatic, but there's also a touch of Rushmore. (I can't hear the phrase "hand job" anymore without thinking of Dirk Calloway. Can you?) Submarine more than transcends its influences, however; I'd more lump these films into one ill-defined genre of darkly comic coming-of-age stories starring morbid teen boys trying to operate beyond their meager years in some kind of post-Salinger wish-fulfillment scenario. (See also: The Chocolate War, Flirting (also featuring Noah Taylor).) 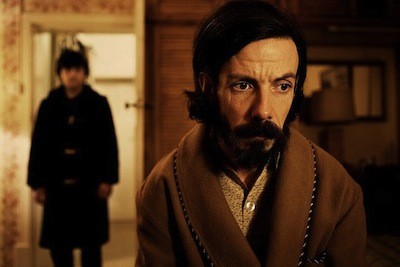 Submarine is written and directed by Richard Ayoade, adapted from a novel by Joe Dunthorne. Ayoade is better known as an actor, particularly for his performance as Moss on the British sitcom "The IT Crowd." Submarine brims with a confidence that makes its visual quirks and wonky point of view feel natural rather than contrived. Ayoade flips between different film styles to give life to Oliver's memories and wishful thinking, though the overriding atmosphere of Submarine is gray and rainy. Erik Wilson's photography establishes a physical representation of the cloudy inner turmoil that Oliver is experiencing, perhaps even more than the boy's own words. The chill is so palpable, you might find yourself wishing you had the teenager's coat.

Craig Roberts is pretty fantastic in the lead. He has a smoldering charisma that manifests in those big eyes, adding an extra danger to his long, catatonic stares. He is broody and clumsy, but he's also sweet and has a deadly sarcasm. All of the performers here take it easy, underplaying what oddballs they are. Only Paddy Considine (Red Riding 1980) gets to ham it up in a supporting role as a mulleted motivational speaker that has a history with Oliver's mom. He's quite funny, and also period accurate. Trust me, painted vans like his were everywhere in the '80s. Every neighborhood had at least one. (The timeframe is never explicitly stated, but one can guess from the telephones and the fact that Crocodile Dundee is playing at the local cinema that Submarine is not intended to be 2011; if it is 2011, it's meant to be a 2011 that is woefully behind the times.)

The delight of watching a smartly written movie like Submarine is watching the narrative shift from a safe place to one where things start to go seriously wrong. It's the growing up part, when what was once playful starts to become hurtful, where the youngster has to stop being careless and actually give a damn. Both sides of Oliver's life eventually converge, and the boy sees parallels not just between himself and his father, but between his actions in his relationship with Jordana and how similar actions have hurt his parents' marriage. Submarine is a movie that actually goes somewhere, and it's a somewhere that isn't entirely expected, that both busts Oliver's dreams and gives him some of what he wishes for. All the struggling is worth it. The nausea of adolescence is quelled, and the vast expanse of the sea begins to yield some hopeful answers in the end. 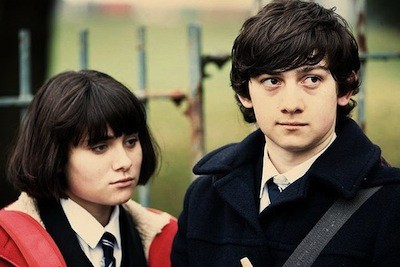