A couple of months ago, when the extended Green Lantern trailer premiered at Wonder Con, I did what all smarmy people like me do and made a joke about it on Twitter: "Looks like they made Sucker Punch with boys." That trailer spent a good amount of time showing off the planet Oa, where the Green Lantern Corps have set up their giant spaceman locker room, and that planet's oppressively dark atmosphere and rocky surfaces peopled with computer-generated creatures looked to me to come from the same tedious spank bank as Zack Snyder's fetish world. Just with a lot more dudes and a whole bunch more green.

Surprisingly, there is not all that much time spent on Oa, or outer space in general, in Green Lantern, and ironically, though this is the aspect of the that film that looks the worst in the trailers, it's actually a lot better than all the time spent on Earth. Which is damning with faint praise. I'll say it straight up, Green Lantern isn't an abomination. Bad as it is, it's not a particularly terrible movie. From a story standpoint, it's actually well put together. Yet, somehow it still manages to fail on almost every level, and where the Sucker Punch comparison really holds up is in the fact that both movies are relentlessly boring. Sprinkle all the high-tech fairy dust you can on Green Lantern, it will never stop being dull.

Green Lantern is based on a long-running, uber-geeky DC Comics series. This film, directed by Martin Campbell (Casino Royale) and credited to four different writers, sticks pretty closely to the character's four-color origin. The Green Lantern Corps are a group of universe-spanning space cops, each warrior assigned to a different sector of the galaxy where they fight intergalactic crime using a cosmic ring that allows them to create powerful illusions just by thinking them. If they imagine a gun, for instance, a gun made out of emerald light appears and fires real bullets. If one of the Lanterns dies, their ring then chooses a worthy successor, someone from within the galactic range who has an overabundance of willpower and a short supply of fear.

And so it goes for Hal Jordan (Ryan Reynolds), the first human Green Lantern. At the start of the movie, Hal is a reckless test pilot with severe daddy issues that pop up at the worst times (try not to snigger during the flashbacks, I dare you) and who can't commit to anything more than ill-considered wisecracks. When Abin Sur (Temuera Morrison) is murdered by the planet-devouring Parallax, the ring brings him to Earth, and that's where he hands Hal his new destiny. From there, it's pretty standard superhero stuff. Hal has to get with the program and rise to the occasion, overcoming everyone's doubts, including his own, in order to stop Parallax from eating everyone on Earth. (Parallax is powered by fear and the color yellow. Green Lantern is like a really messed up Sesame Street. "This episode brought to you by Impure Thoughts and the color Vermillion.") At the same time, Hal is going to win back the girl he lost because of his emotional issues, and settle a childhood rivalry with another old acquaintance, an egghead scientist infected by Parallax. Whatever this alien virus is, it turns the dude into a real douche. 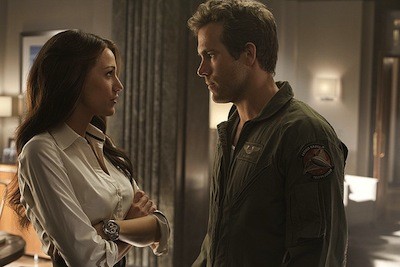 The girl that Hal is chasing is Carol Ferris, daughter of the owner of the aircraft company Hal works for. She is played by Gossip Girl's Blake Lively, who I'll admit is pretty damn sexy, but she's wholly unconvincing as the head of a corporation of any kind, much less a weapons contractor. To be fair, the actress isn't even going to turn 24 until later this summer, she should have never been cast in a role this far beyond her years. The fact that she reminds Ryan Reynolds, who is ten years her senior, that they aren't kids anymore twice in the first half hour comes off as the production team covering their ass. "She's grow-up, he's not! Get it?!"

On the other hand, the earthbound villain is awesome. Hector Hammond is the braniac who grew up in love with Carol and resenting Hal for being so cool. Hector is played by Peter Sarsgaard, and he is wicked fun. Sarsgaard has always been a strange guy, and here he is allowed to use that strangeness to full effect. Hammond is a slimy weirdo, and in the few scenes where he cuts loose on his enemies, he's awesome. Sarsgaard laces each and every word with venom. Sweet, delicious venom. I don't know how many parts he's maybe lost to Ryan Reynolds and other pretty boys like him over the years, but Peter's dishing up some sweet revenge at last. 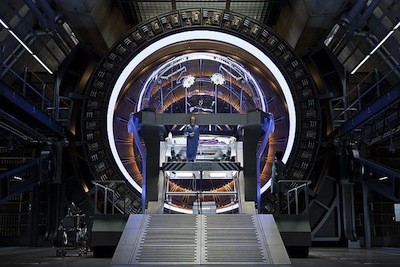 Which makes it all the more frustrating that Hector Hammond isn't the real villain, that the space monster Parallax, voiced dispassionately by Clancy Brown, is given center stage at the climax. Parallax is a creature devoid of personality, and it's not scary. It looks like roving space mildew. Yeah, I know, boring. Which again, is Green Lantern's big problem. Somehow none of this is ever interesting. You know how in other movies that seem like they should be good, there are always these peaks along the way where it seems like the film is going to take a turn for the better? No such spikes manifest here. Green Lantern walks one even line, and it's a direct route to Dullsville. Even Ryan Reynolds, who is charming as all hell, is somehow reduced to vanilla. Maybe it's the terrible CGI spacesuit and doofus mask they make him wear. It's an astonishingly poor effect in a movie with otherwise excellent special effects wizardry. The only other screw-up is the Guardians of Oa. These guys are essentially malformed Smurfs, and for whatever reason, their faces look like they are made out of rubber when they talk. Oh, and the 3D is absolutely superfluous, too. Why is it that all of these 3D movies lead with a scene that uses the gimmick to its full potential, but then drop it for the rest of the flick?

There's already a lot of hate being heaped on Green Lantern, and a lot of it is deserved. The real truth is that Green Lantern isn't as bad as all that, though you'll ultimately wish it was. It's one of those films where being more terrible would actually be an improvement. Then at least you could laugh your way through it rather than fighting to stay awake.

Whattaya gonna do, Ryan? Cry about it?