I had kept Parks and Recreation at arms length for the first season and most of the second, yet there were two additions to the cast at the end of the second that piqued my interest and compelled me to try the third. Specifically the two were Rob Lowe (The West Wing) and Adam Scott (Party Down). While their addition was not vital, the combination of this with the cast becoming increasingly comfortable in their roles made for comedic kismet in its third season.

For those unfamiliar with the show, it is shot documentary-style, similar to the other show that airs on Thursday nights on NBC (The Office). The focus of the "film crew" is on a Parks and Recreation Department in Pawnee, Indiana. The main focus within the department is Leslie Knope (Amy Poehler, Baby Mama), who has career aspirations beyond her current status. Leslie works for Ron Swanson (Nick Offerman, The Men Who Stare At Goats), whose libertarian views of government seem to only be matched by his love of red meat. Ron's secretary April (Aubrey Plaza, Funny People) is full of youth and sarcasm, and she finds herself attracted to Andy (Chris Pratt, Take Me Home Night), a goofy and clueless worker in the building who might still have feelings for his ex-girlfriend Ann (Rashida Jones, The Social Network), a nurse at the local hospital and friend of Leslie's. Aziz Ansari (30 Minutes Or Less) plays Tom Haverford, Leslie's second in command who possesses and entrepreneurial side in his off-time, while Lowe and Scott are bureaucrats from Indianapolis that are working with the town to help rein in their financial budgets (with Lowe playing the health nut Chris and Scott the former wunderkind city official Ben). This takes care of the main members of the cast who have storylines and arcs devoted to them in some manner of fashion, though Donna (Retta, First Sunday) and Jerry (Jim O'Heir, Accepted) round out the main cast. 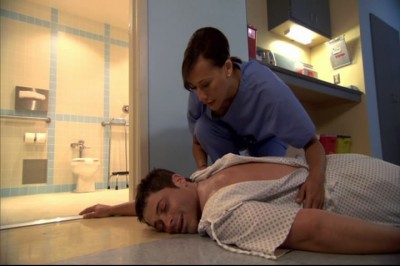 It's been said in interviews that I've read and heard that the first season, clocking in at just six episodes and on a hurried production schedule, bowed to mixed reviews and minor concerns that Poehler was being wasted in the lead role. With the second season (which I recently watched over the summer break), you could see that there was more confidence the actors showed in the characters, along with the writing staff's ability to find a voice for each of them. However, in the third season, the regular cast, combined with Lowe and Scott's additions, really hit a consistent comfort level that few network comedies have struggled to achieve only once. The show came out of the blocks decently in its opening episode titled "Go Big or Go Home," but really found their stride with the following episode "Flu Season," which found most of the cast together at the Pawnee hospital enduring a debilitating virus. This pseudo "bottle episode" strategy of bringing all parties together (and putting the remaining people in the secondary storyline) either for an ep or a scene was a well the creative team went to several times through the season, and it worked tremendously, with "The Fight" and "Fancy Party" being two examples of this within the show.

It also didn't hurt that the ensemble's prior experiences, be they in theater companies (Offerman) or in comedy troupes (Poehler, Ansari) allowed for a great deal of improvisation which resulted in great moments for the show, and both of those I think lead to an absolute devotion to their characters. Offerman's performance in the third season has been the subject of internet memes (not to mention a really cool poster) and raves for his work in the third season, and rightfully so. But for me, one of the underappreciated jobs was what Lowe did with Chris. Chris is a person who is confident and sure of himself and has been for the longest time. It is easy to understand why, he's in shape, a good-looking guy, and he should have the world by the short hairs. There are two things that occur in the course of the season that could potentially compromise his outlook, one is hilarious, and the other is an understated emotional conflict that makes for some interesting moments for him in the coming season. Moments like that were handled in a sweet and understated way through the season. The blossoming relationship between April and Andy was equal parts sweet and funny. The two same the general sensibilities despite their age difference, and when people were invited into their dynamic (such as Ben was in "Jerry's Painting") the results were hilarious. 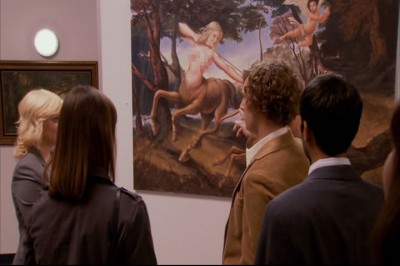 Ultimately while Parks and Recreation might not be breaking too much new ground in sitcoms (compared to its younger brother Community) or is flat out redefining the format as we know it (a la Louie), I firmly believe that own its own merits it have held the balance between belly laughs and character development better than most shows in recent memory. The performances were funny as were the stories, and it makes this particular late blooming hopes that the kismet continues with the upcoming fourth season.


The 16 episodes are spread out over three discs and presented in 1.78:1 anamorphic widescreen, consistent with their original broadcast format. The transfer looks good, with flesh tones and the color palette in the show both looking accurate without any noticeable oversaturation. There is a lack of edge enhancement or haloing, and with the source material being clean as a whistle, no artifacts or image noise that is overly troubling. It looks about as good as it does when it aired a few months ago.


Dolby Digital 5.1 surround on all of the episodes. The show sounds as clear as it did when it aired on television, with dialogue sounding clear and consistent. It's not going to wow you with many directional effects or channel panning, but there is a subtle layer of immersion within the soundtrack to make you feel at home. There is even a song thrown in every so often to test out the legs of the soundstage. It's not going to wow you, but it does what is expected of it.


All three discs are packaged in a standard case, with the first two discs laid over one another, Venn diagram style. That said, there are some good extras spread out over all three discs. Disc One has deleted scenes from all six episodes, totaling 21:28. Among the gems we are introduced to here is the "Ron Swanson Ying-Yang of Failure," which is something I'll let you discover for yourselves. A commentary for "Flu Season" with Poehler, Scott and show runner Michael Schur is equal parts fun recollection and has its own laughs in it. The trio talks about the struggles to hide Poehler's then-pregnancy as well. A commentary for "Ron & Tammy 2" with Offerman, Megan Mullally (Offerman's real-life wife who plays Tammy), Schur, Retta and O'Heir is next, and they recall the scenes and rave on the other actors who appear in it. To answer the speculation, yes, Offerman's moustache was shaved, and his cornrows were real. Both tracks are fun and worth a listen. There is a funny Inception style trailer for the "Ron & Tammy 2" is next (2:04), along with a fake commercial to the Pawnee radio show "Crazy Ira & The Douche" (:26). The gag reel (23:26) is episodic in length and includes "commercial breaks" and is full of flubs and corpsing moments. 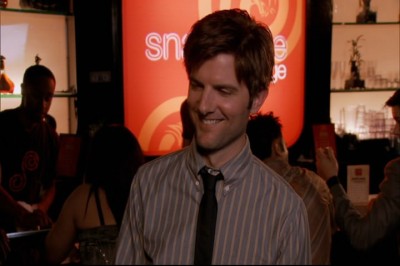 Disc Two has an extended "Producer's Cut" of the "Harvest Festival" episode that runs about five minutes longer and has some creative nips and tucks in it, along with an alternate take or too. There is even a commentary for it with Retta, O'Heir, writers Harris Wittels and Daniel Goor, director Dean Holland and Schur, and while they have some production recollection and spot the differences between the regular and extended cuts (and spotting what was what), this track is a bit more jokey than the others. The other commentary for the "Camping" episode includes Schur and cinematographer Tom Magill, camera operator Shana Hagan, craft service assistant Josh Swoveland and location manager Paul Boydston, among others. As the track includes some lesser-recognized crewmembers, Schur gives each the opportunity to discuss about their particular roles on the show, what they do and the challenges involved in each. In a weird way, this track illustrates the amount of additional work that goes into a production and is worth a listen for the curious. There are also deleted scenes on four of the five episodes on the disc (15:23).

Disc Three has an extended cut of "The Fight" episode, along with a commentary on it by Poehler, Schur and Scott, where the jocularity and production recollection continue, as well as pointing out even more footage they cut from the episode. Offerman, Mullally, Retta, O'Heir, Holland, Goor and Schur come back for the "Li'l Sebastian" extended episode and recount things on this one, as well as spotting some small improve notes and more subtle things in the show. Along with deleted scenes from each episode (10:30), you've got three more faux commercials (3:05) and three additional video promos (6:24), as well as a tribute to Li'l Sebastian (2:01).


Season Three of Parks and Recreation regularly brought the funny over its sixteen-episode run better than most shows have and to borrow a phrase from the sports fan Schur, was in a zone where its streak couldn't be broken. With fantastic performances, it was appointment viewing for this reviewer. Technically it's decent and from an extras perspective everything here is enjoyable, and anyone who has yet to jump on the Nick Offerman bandwagon should start with this season and work from there.