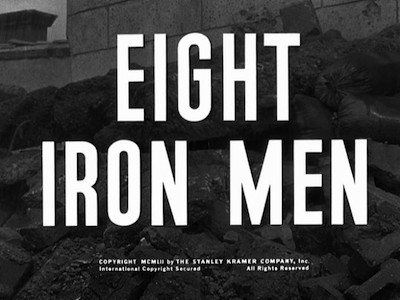 Eight Iron Men is not the eighth installment of the Marvel Comics superhero franchise, you didn't blink and miss parts three through seven. Rather, it is a 1952 World War II story directed by Edward Dmytryk (The Caine Mutiny) and produced by Stanley Kramer (Guess Who's Coming to Dinner), working with a script that playwright Harry Brown (Sands of Iwo Jima) adapted from his own stage drama. Its Broadway origins are evident in the plot: the action takes place mostly in one spot, a bombed-out building in Italy where are a ragged platoon is holed up waiting for orders to move out.

The particular patrol is nicknamed "Lucky" because they have carried on through their tour with the same eight men as they began with. At the start of the picture, three of those men come under fire from a German sniper, and when they try to escape, one of their number, the aptly named Private Small (George Cooper), trips and falls in a mud puddle. He is the company klutz, and so no one is surprised that he is pinned down by the hidden gunman. Plans to rescue him are made all the more urgent by rumors that the Allied troops will be moving out come nightfall. Tensions mount as the seven remaining men try to figure out how to get their comrade out of there, even if they have no orders to do so.

The team is led by Sergeant Joe Mooney (Lee Marvin), a commander dedicated to his soldiers but who is also practical and respectful of the proper way of doing things. Beneath him is Private Coke (Richard Kiley), whose trigger has gotten hair thin and who can't deal with the proper way of doing things if that means doing nothing. In the middle of this intensity is also Pvt. Collucci (Bonar Colleano), your stock New York motormouth skirting through the war doing as little as possible. The majority of Eight Iron Men's taut 83 minutes is spent in their encampment arguing over action versus inaction, dreaming of food and women, and questioning whether the orders to leave will really come through at all.

One would assume that the limited space and the impending deadline would lend Eight Iron Men a natural tension. The ever-present gunfire would slowly eradicate any pretension of calm and as the men come unraveled, so too would the audience unravel with them. In theory, this is exactly what is happening, but that theory never becomes a reality, and I can't quite put my finger on why. There is nothing wrong with Eight Iron Men. The performances are excellent, the writing is smart, and the direction is assured. The characters are established well, conflicts arise without any need to force the situations, and there are even a couple of firefights to give the action a kick. The only poorly executed scenes are the daydreams that take us away from the war and into rather predictable playboy fantasies. With all these things assembled, the movie should work like a charm.

Except it doesn't. For whatever reason, Eight Iron Men never catches fire. As a motion picture, it serves its function, but only that. It lacks the griminess of Sam Fuller's The Steel Helmet or Rod Serling's television play The Strike, both of which came to mind while watching Dmytryk's picture. Each portrays men at war stuck in untenable situations against impossible odds, and the Serling in particular shows them trapped in a specific space, at the mercy of outside intelligence, unsure of how they will get away. Both Fuller and Serling found something vivid in their scenarios that took the material beyond the standard moral quandaries. Eight Iron Men feels perfunctory and safe by comparison, and as a result, is an effort that is merely okay rather than exceptional. 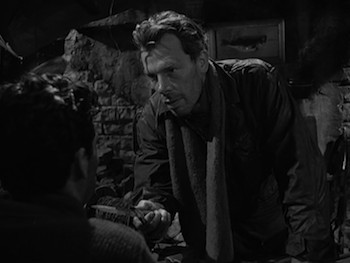 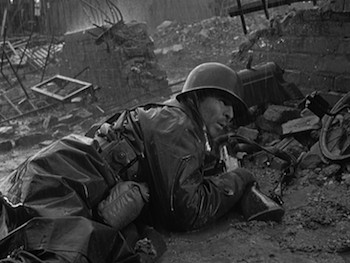 Video:
Eight Iron Men is part of the Sony Pictures movie-on-demand program. In short, this means it's a DVD that isn't being mass produced, but is instead being made to order for cinema fans who want to spring to have a copy in their collection. Made as a blue-backed DVD-R, it comes with no frills, with little by way of restoration.

The 1.33:1 presentation is actually pretty solid, all told. The image is free of any egregious print damage and the digital resolution is above average. The overall picture is maybe a little light, but the balance in the black and white photography is pretty decent. Like the movie, it gets the job done without coming off as particularly bad or exceptionally good.

Sound:
The mono mix sounds very good, with no hiss, stray sounds, or off tones. Dialogue is clear, and sound effects come through nicely.

Extras:
None. As far as I can tell, this one doesn't even have a menu, nothing would come up on my player or my computer.

FINAL THOUGHTS:
Rent It. War may be hell, but it's not always good drama. Eight Iron Men, the 1952 World War II drama helmed by Edward Dmytryk, is one of those hard to quantify movies that really does everything right, but somehow comes out being not all that great anyway. In a way, it's a wartime chamber piece, following a platoon of men stuck in one bombed-out building as they try to figure out how to save one of their own from sniper fire before the company moves out. With staunch performances from Lee Marvin and Richard Kiley on opposite ends of the argument, you'd think the film could generate some steam, but not even a couple of shootouts can raise it out of the doldrums. Being workmanlike means you aren't all bad when the workmen are this good, but it still should have been better. 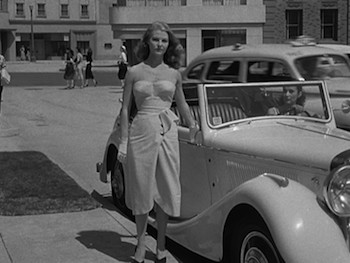 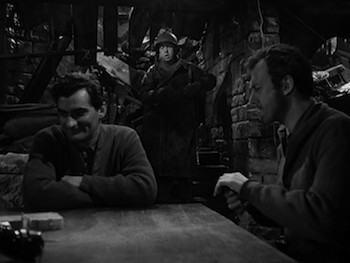