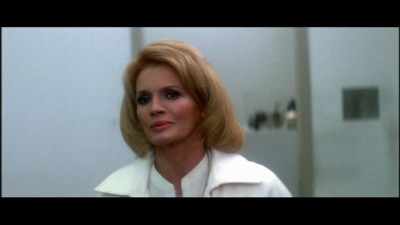 Please Note: The screen captures used here are from the 2001 DVD edition, not from the Blu-ray disc under review.

Director Brian DePalma (Carrie, Sisters, Casualties of War) seems to have a reputation for being little more than the ringmaster of a lurid, graphically violent, outlandishly sexualized circus. This is a take on DePalma and his work that is reductive at best. If that really were all that DePalma's admittedly uneven filmography had to offer, he would only be another in the legion of anonymous hacks who produce straight-to-video horror thrillers and late-night-cable softcore porn. The reason for his work having some solid claim on the admiration of serious film aficionados is that he is a very particular kind of cinematic formalist; and his wonderful 1980 postmodern horror comedy, Dressed to Kill, is (after Dressed to Kill's follow-up and Depalma's defining statement, 1981's Blow Out) his best, most beautiful, most acutely form-obsessed work. 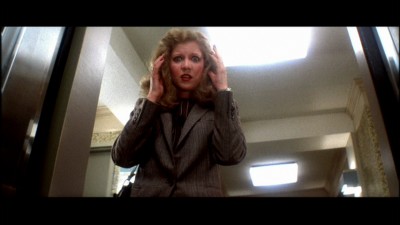 The film's tale of psychosexual horror sounds faintly ridiculous, like third-tier murder-mystery pulp: After the horrific razor-blade murder of sexually frustrated, wayward upper-middle-class housewife Kate Miller (Angie Dickinson, Rio Bravo) at the hands of a mentally tortured, shades-and-trenchcoat-clad transsexual who goes by the name of Bobbi, the plucky, urbane, stock-market-playing hooker who witnessed the murder, Liz Blake (Nancy Allen)--along with Ms. Miller's late-adolescent, computer-and-gadget-geek son, Peter (Keith Gordon); a crusty police-detective caricature (Denniz Franz, who else?); and Dr. Elliott, psychiatrist to both the late Ms. Miller and the disturbed Bobbi--try to track down and neutralize Bobbi before she can rub out Liz, who was the only witness to her crime. (If the fact that the deranged murderer is a transsexual sounds trans-phobic, it's not; in the film's fittingly dimestore-Freud terms, the character kills because of her male side's refusal to fully integrate what the film accepts as her true female side, and there's a comic scene as enlightened as it is hilarious that comes toward the end in which DePalma, through his characters, expresses his acceptance of transsexuality and its logistics in some drolly squirm-inducing detail.) 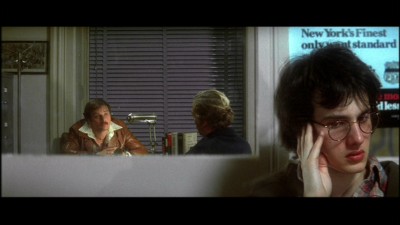 Though all of the actors are quite good (they're all very game and seem hip enough to what's going on in the picture to maintain a queasy balance between comic pastiche and full-on visceral nightmare), DePalma's is a decidedly auteurist cinema, and the film is first and foremost his show. Somewhat resembling Sergio Leone, his imagination soars to its greatest heights when taking an utterly typical narrative situation or genre commonplace and transfiguring it with his own distinctive style (lusty but composedly ice-cold, in contrast to Leone's sweaty heat), elongating it, savoring it, whipping it up--aided all the while by Pino Dinaggio's score, with its sardonic, cooing sirens that seem to be luring the characters to their doom--until there is almost no humdrum, plot-furthering cake left underneath all the decadent stylistic icing.

Hence the astoundingly ambitious and amazingly executed scene in which Ms. Miller plays a drawn-out, erotic game of cat and mouse with a handsome stranger in a museum. This sequence is wordless, long, and meticulously detailed; its exhilarating Steadicam shots simply glide (their perfect creative resourcefulness sending aloft the soul of every film-loving viewer in the process). Or the film's other most immediately memorable set piece, the elevator-set murder scene. If Sam Peckinpah slowed down and drew out his violence into a ballet, DePalma goes at his like he's creating an ultra-chic Pop-Art installation project; its obvious artificiality and intricate camera setups and blocking completely undermine any "realism," but it is still a shock owing to how bold (some might say shameless) and gratifying it is on at the level of its purely plastic, graphic elements--light, color, reflection. It is stunning in two senses: the aesthetic one and the one that means we're jolted by the suddenness and ferocity of the violence being depicted. The story DePalma is telling us may be just the trashier side of the psycho-killer genre taken gleefully to the nth degree, but it is his incomparable artistry, his mastery of the visual grammar of lighting, framing, and editing, that becomes the film's true subject, injecting more than enough vitality into every should-have-been-merely-cheesy frame to transform Dressed to Kill into a self-enclosed, hard-edged, brilliant work of last-gasp, end-of-the-line postmodernism. 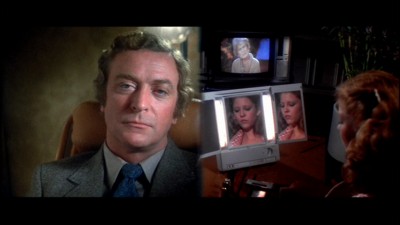 I can say postmodernism (a word and a concept I'm usually very wary of) in this context because DePalma's work in general, and Dressed to Kill in particular, is the next, logical, final progression from the cool, cruel modernism of Alfred Hitchcock, which at its greatest heights was always right on the verge of confessing itself as an elaborate trick, a toying-with of our emotions, a technically expert and rigorously, perfectly crafted manipulation of the quite possibly sadistic or mad underlying desires that the cinema lets us safely, voyeuristically explore. DePalma's most interesting work confesses its manipulation in every frame, unmooring itself from any modernist moral qualms and reveling ecstatically, with the utmost skillfulness, in the sheer, blunt movieness of itself. (Hitchcock's films are like projections of our dreams and nightmares; Dressed to Kill, which is bookended by dreams within the movie, is like the dream or nightmare a movie would have.) This is a story in love with being a story; it has no interest in being "real." Thus, although Dressed to Kill borrows liberally and baldly from Psycho and Vertigo, it would be wholly inaccurate to disparage it as derivative. DePalma's films are to Hitchcock specifically, and to the cinema in general, an investigation into the whats, whys, and hows of a medium that seems to possess a disturbing, mysterious, uncanny power and cultural impact. Dressed to Kill is a particularly luscious, symmetrically composed reminder that DePalma is to Hitchcock as Andy Warhol is to the Campbell's soup can or Roy Lichtenstein is to the comic strip; he shows us our pop culture in a mirror that cannot rob it of its fun and pleasure, even though the reflection is unsparing and reveals everything.

Having viewed the 2001 DVD multiple times, I can verify that this Blu-ray edition, with its AVC/MPEG-4 video codec and anamorphic-widescreen, 2.35:1 aspect-ratio transfer, offers a substantial upgrade in picture quality from the SD version. The literally glaring artifice of DePalma and director of photography Ralf D. Bode's absolutely ingenious lighting--along with DePalma's love of vivid-verging-on-garish color and lovingly rendered split-screen effects--is crisper, clearer, and more vivid here than before, with much less flickering and other minor compression artifacting than was noticeable on the DVD.

The 5.1 DTS-HD Master Audio soundtrack is perfectly balanced, with all the dialogue and every bar of Pino Donaggio's too-lush, Bernard Herrmann-parody score (which is kept at its necessary, variable, nuanced levels on the soundtrack)--not to mention the screams--coming through loud, clear, and entirely undistorted. 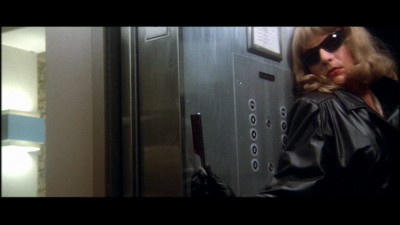 The extras, all of which are carried over from the nicely put-together 2001 DVD release, include:

--"The Making of A Thriller", an engrossing 45-minute documentary featuring circa-2000 interviews with DePalma, Dickinson, Allen, and Gordon (no Caine, unfortunately). The interviewees are all insightful and generous with their relevant (and sometimes juicy) on-set recollections, though Dickinson alone would make this worth digging into; she is a hoot, and one gets the feeling she and DePalma had plenty of dirty-joke laughs while working together.

--Three featurettes of about five to 10 minutes each: 1) Slashing Dressed to Kill, a slightly more detailed look than that offered in "The Making of a Thriller" at the cuts required to get the film the R rating essential for its theatrical distribution. 2) "A Film Comparison: The 3 Versions of Dressed to Kill", a head-smacking side-by-side (above-and-below, actually) comparison of the film's uncut, R-rated, and network (!) versions. The network cut of the famously explicit Dressed to Kill is hilarious, of course; almost nothing is left of this movie once you've removed anything that can't be shown on broadcast television! But the tiny differences between the R-rated and unrated versions are so infinitesimally small, only the most prurient eyes and minds would get caught up on them, and the comparison makes you hate the MPAA almost as much as This Film Is Not Yet Rated. 3) "Dressed to Kill: An Appreciation by Keith Gordon", in which the actor, now a director himself (The Chocolate War, Dexter), gives his filmmaker's take on what makes Dressed to Kill great, and recalls the creatively inspired environment he experienced while working with DePalma.

Like a version of Hitchcock's wittily sublimated, deeply troubling psychosexual observations with the muffler rusted clean through to reveal the inner workings and unfetter the mechanical roar, Dressed to Kill, Brian DePalma's poison-candy love letter to the Master of Suspense, is relentless in its ability to make you laugh and gasp with simultaneous discomfort and pleasure; more subtly, it slyly distances the viewer in ways that force us to actually be conscious of and thinking about the film as an object and the experience of watching it. It achieves and sustains an impossible equipoise at the extremely fine point where horror and comedy, rip-off and tribute, ugly and ravishing meet, making it a rare specimen from a thinly populated, almost oxymoronic category of great cinema: the postmodern masterpiece. Highly Recommended.