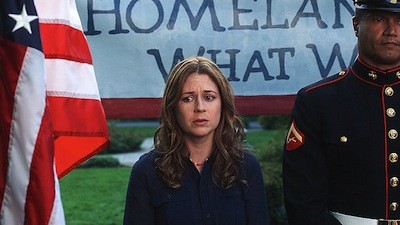 Well, that was fun.

No, really. I like being stuck in your suburban downward spiral. And awayyyyy we go!

The new indie drama A Little Help is the story of one woman's long tumble toward a dreary middle-class rock bottom. Jenna Fischer from The Office plays Laura, a dental hygienist in New York state who loses her husband Bob (Chris O'Donnell) to a heart arrhythmia nearly a year after 9/11. I think I'm supposed to treat that like a spoiler, but screw that noise. We've hit a problem when spoiler culture says the central motivating factor of the film can't be revealed. Chris O'Donnell dies in the first reel, that's the movie. Without that happening, Jenna Fischer can't be depressed and confused.

And depressed and confused she is. Laura didn't have it together before her husband died, she sure isn't ready to take care of their prepubescent son Dennis (Daniel Yelsky) on her own. She smokes on the sly, drinks too much Budweiser, and she has no idea what state her finances are in. Her marriage was on the skids anyway, and she was pretty sure her spouse was having an affair. Hurrah!

Anyway, the rest of A Little Help is Laura making one bad decision after another. She gets bullied by her overbearing sister (Brooke Smith) into pursuing a medial malpractice suit against the doctor who missed Bob's heart condition. She gets bullied by her son into telling his school that Bob was a firefighter who died in 9/11. She has bad sex while watching King of Queens. (Writer/director Michael J. Weithorn worked on that sitcom, so it's an inside joke having Jerry Stiller berate his lead from the televison while she gets called a "dirty bitch" and instructed by her one-night stand to call him "the best.") Three guesses what happens when her brother-in-law (Rob Benedict) tells her he always loved her and not her sister. I'll give you three, but seriously, you can save the other two for something difficult. 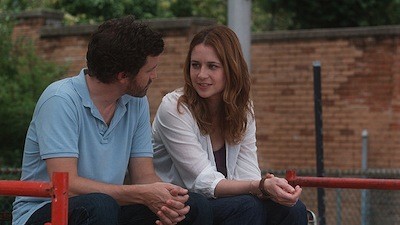 It's not that A Little Help is an especially bad movie. It just makes itself an easy target by only going after easy targets itself. The construction of the film is lock-step with Syd Field theories on writing screenplays, and so the dramatic puzzle all too conveniently fits together. From the overworked husband to Laura's judgmental mother and passive father (Lesley Ann Warren and Ron Leibman), we can see where it's all going to fit. There isn't a hair out of place. Every Chekhov cliché is adhered to. You want to know what the gun in Act I is? The barking dog next door. The kid all but tells you what he's going to do to it in Act III. That gun will go off. (Note: There isn't actually a gun.)

There's a good movie in here somewhere. Some of Laura's moral quandaries are interesting. She and Dennis have an ongoing conflict over what is an allowable lie and what isn't, and she crosses the line herself when she coerces a witness in her legal case. Problem is, that never gets addressed, it never pays off. None of it really does. So, A Little Help is about 90 minutes of things going wrong and Laura screwing up and ten minutes of her figuring it all out. Despite being the movie's villain (all the characters are clearly defined as good or bad; the story may have gray, they do not), Laura's sister is right when she says Laura does these things to herself. I am not sure her father's sage advice of "you just have to keep showing up" really cuts it.

The actors save the movie from being unwatchable. Jenna Fischer is credible as Laura, even if she doesn't really find much more to do with the role than what is on the page. Rob Benedict is actually pretty charming as the would-be free spirit who signed on with the wrong woman. His revelation to Laura about his true feelings gives A Little Help its best scene. The movie could have just focused on that instead of mucking it up with lawsuits and 9/11 and all that. The pain of love is the only hurt here that seems even remotely true, the only time when it doesn't come off like the filmmakers are punching their time cards and waiting out the clock. The title A Little Help says it all: do only as much as necessary to get by, and hope no one notices you aren't really trying. 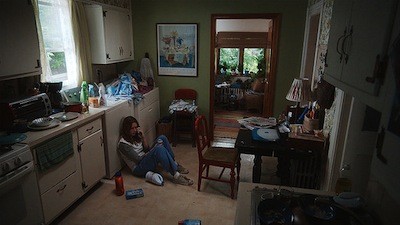