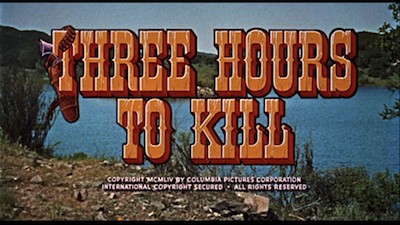 Three Hours to Kill is a tidy genre piece, a 75-minute western with its own time limit. Jim Guthrie has three hours to take care of business or get out of town. Period.

Guthrie is played by Dana Andrews, a reliable second-stringer from the studio days, helming a cast of similarly reliable character actors. Jim is returning home after several years on the run, looking for revenge and a little truth telling. As we learn in flashback, his life took a turn for the worse on a drunken night when his fiancée's brother ended up dead, he was accused of the killing, and Jim narrowly escaped his own lynching. Now he wants to prove once and for all who really killed the man and win back his lady love (Donna Reed). Just about everyone in his social circle helped tie the noose around his neck, so all of them have reason to shake in their boots. The top suspect is the banker Niles (Richard Coogan), who also had his eyes on Jim's sweetheart. There is also the gambler (Laurence Hugo) and the sheriff (Stephen Elliott), both of whom show undue remorse over the bad events. The only one who isn't under suspicion is the brassy saloon girl (Dianne Foster) who always loved Jim Guthrie herself.

Three Hours to Kill came out in 1954 and was directed by Alfred Werker (He Walked by Night). It's a slim story. Once we're past the flashback, it's a pretty straight shot through the rest of the plot. The lawman gives Jim three hours to do what he has to do, and after that he either needs to be gone or behind bars. Jim works his way through town, questioning and threatening, getting vague new details. There aren't a ton of surprises, honestly, and up until the two-man brawl that finishes the picture, most of the action lacks any real danger or tension. Even so, it's all competently executed, and despite not being very fancy, involving enough and short enough that you'll never be tempted to step away. The script touches on a lot of scandal--gambling, drinking, threesomes, and children born out of wedlock--but in a surprisingly matter-of-fact fashion. These undertones add gravity to Jim's mission--these are questionable people leading less-than-puritanical lives--but they never become pronounced enough to become too incendiary (and thus snuck past the censors).

So, Three Hours to Kill is good for what it is. In the old days, it likely filled a second slot on a bigger bill, and as B-pictures go, it's absolutely solid, delivering the right genre points and finishing big (the last fight is pretty great). It's like a lesser knock-off of High Noon, but if you like westerns that end in a big showdown, you can't go wrong here. 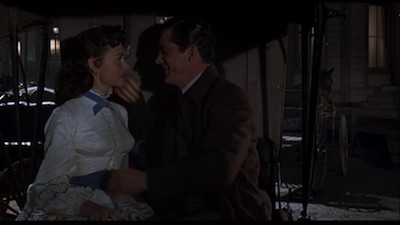 Video:
The manufacture-on-demand release of Three Hours to Kill is mastered on DVD-R as a full-color, widescreen image. The picture quality is very good, with nice Technicolor tones and very little print damage. It's not as sparkly as we might expect from a full-on restoration, but Three Hours to Kill isn't a sparkly movie, and so the job gets done and that's good enough.

Sound:
The original soundtrack is mixed as a mono audio track and is also excellent, though sometimes the dialogue can sound a little low. Other than that, I have no complaints. The tones are good and there is no extraneous noise.

FINAL THOUGHTS:
Recommended. Alfred Werker's 1954 western Three Hours to Kill leaves the fancy stuff for other cowboy movies, but what it lacks in fuss it makes up for in efficient storytelling. Dana Andrews leads the cast as a wronged man returning to town to clear his name and get some payback for the rope scar on his neck. Donna Reed plays his lost love, while Dianne Foster is the hooker with a heart of gold who always knew he didn't murder anybody. (Carolyn Jones also has a brief role as a sexy blonde card dealer). The movie covers the late afternoon hunt that Andrews' character undertakes, seeking out the real killer and exposing the town's dark secrets. It's not great or even super memorable, but Werker takes the material seriously and manages to pull a tight little action picture out of the otherwise very basic plotline. 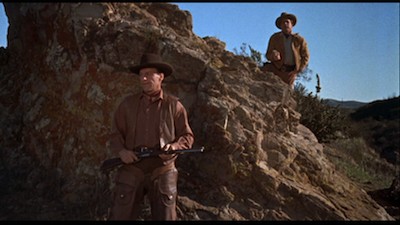