Please Note: The images used here are promotional stills and are not taken from the Blu-ray edition under review. 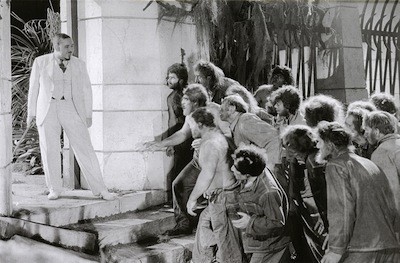 It's rather astonishing what a strange film Island of Lost Souls is. Directed by Erle C. Kenton in 1932, it's the first cinematic adaptation of H.G. Wells' The Island of Dr. Moreau. Though the story and various depictions of the titular doctor and the beasts he creates has since taken a permanent place in the pop culture lexicon--in most recent memory, the mad scientist was played by Marlon Brando, and the South Park parody of Moreau is almost as infamous as the real thing; not to mention musical tributes from quirky alternative bands like Oingo Boingo and, of course, Devo (who are featured on this release)--I can't imagine what it must have been like sitting in those early audiences seeing this novel come to life for the first time.

The story is pretty simple. Edward Parker (Richard Arlen) was set adrift when the ship he was sailing on sank. He is picked up by a cargo ship and cared for by Montgomery (Arthur Hohl), a disgraced doctor charged with guarding the wildlife being transported to an uncharted island. Parker runs afoul of the ship's drunken captain, and the seaman ditches him overboard with the animals when they reach their destination. This strands Parker and puts him at the mercy of Montgomery's boss, the slippery Dr. Moreau (Charles Laughton). The strange practitioner is at first concerned with what Parker might spy on his island, but then he sees an opportunity. Moreau has been creating creatures that are part human, part animal. The most perfect realization of his hybrid process is also the only female: Lota, the Panther Woman (Kathleen Burke). He doesn't trust the other aberrations around the woman, but maybe letting her mingle with Parker will reveal her true social capabilities. Can the Panther Woman love?

Island of Lost Souls is an impressive display of early cinematic special effects. Kenton and his team, which includes Wally Westmore on make-up and art director Hans Dreier (both of whom worked regularly with Billy Wilder and Preston Sturges), create an eerie, otherworldly environment for Moreau and his creatures. Thick foliage hides both Moreau's fancy laboratory and the village of the beast-men. They are led by the Sayer of the Law (Bela Lugosi), a bearded biped who seems slightly more evolved than his brethren, though still beholden to Moreau's strictures. The rules of the community are recited in a call and response ritual. "Are we not men?" they cry, and by way of proving it, adhere to the orders not to spill blood or to crawl on all fours like an animal. Some are closer to reverting to the old ways than others, and the least evolved are enslaved to turn the great wheel generating Moreau's power. It's a primitive fiefdom with the bad doctor as the King.

The make-up for the animal men is fantastic. They aren't just hairy beasts, different individuals represent different animals--a pig, a dog, a gorilla. Some look like Neanderthals, others look like something out of a carnival sideshow. Moreau is their ringmaster, and Laughton oozes a vile charisma. His words practically congeal into slime, and his cruel streak is satisfied through violent rule. He undergoes an almost sexual ecstasy when cracking his whip. His aptly named "House of Pain," where beast-men are taken for punishment, is like an S&M dungeon.

Parker's fate pretty much doesn't matter next to these more bizarre elements. Plus, Arlen is kind of a stiff and the character is a real heel. He makes out with the Panther Woman, something he fails to tell his fiancée (Leila Hyams) when she comes to rescue him--though she most likely suspects something when he's so eager to save the island native on their way out. By that point, their trajectory has splintered off from Moreau's, and honestly, there isn't much tension waiting to see the outcome of their flight from the madness. As with any science-gone-wrong film, the pay-off is seeing the egomaniac brought down. The implications of what might happen to Moreau in his own House of Pain are gruesome. Progress means little if you treat those around you with selfish pride, regardless if they be man or beast.

When you see a movie like Island of Lost Souls that is almost eighty years old and yet still has the power to shock, it makes you wonder why so many contemporary horror films are so ineffective at what they do. The endless parade of remakes, the plotless slasher films and torture porn--it all pales next to Erle C. Kenton's ambition and his precise storytelling. It's easy to gross someone out, it's even easier to bore them, but to elicit genuine chills, that's another talent entirely. Island of Lost Souls, like King Kong or the Universal monster films, are still the models the frightmasters should follow: human stories with human consequences, no matter how outrageous the trappings. 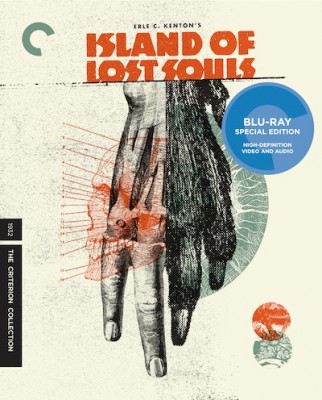 Video:
The original 1.33:1 black-and-white image is restored for a 1080p, MPEG-4 AVC transfer, using a variety of available sources to cobble together as complete a print as possible. The result is fairly stupendous, with cohesion between the different elements and a largely clear picture. Naturally, it is not perfect, and at times there will be some scratches, damage, or distortion, but this is neither obscuring nor distracting. Light and dark is given strong contrast, and blacks are rich and solidly rendered.

Sound:
The original soundtrack is mastered in LPCM mono and is given a nice clean-up. There are still instances of background hiss and ever-so-slight distortion, but the dialogue is clear and easy to hear and the music and other effects have resonance.

An option for Closed Captioning is included.

Extras:
The Criterion booklet for Island of Lost Souls has a critical essay, chapter listings, credits, photographs, and an explanation of the restoration process. The on-disc extras are led by an informative audio commentary by film expert Gregory Mank, who gives a history of the production and of the H.G. Wells story that inspired it. Likewise, a 14-minute interview with David J. Skal tackles the material and places it in the context of other horror films of the period. More historical background is shown through the original theatrical trailer for the movie and a stills gallery that mostly focuses on the special effects make-up.

In terms of other new video programs, modern filmmakers share their appreciation of Island of Lost Souls. In the seventeen-minute "Landis, Baker, and Burns", American Werewolf in London-director John Landis talks to his regular collaborator, make-up artist Rick Baker, and horror fan Bob Burns to enthuse about Island and its lasting influence. The fifteen-minute interview with Richard Stanley gives the director a chance to discuss his relationship with the film and his early involvement with the most recent remake with Val Kilmer and Marlon Brando, which was eventually directed by John Frankenheimer.

Perhaps most fun and surprising, though, is the small section looking at the movie's influence on the band Devo. A twenty-minute interview with Gerald Casale and Mark Mothersbaugh, founding members of the group, sheds some light on what they took away from Kenton's film, and we also get the rare treat of the short film In the Beginning Was the End: The Truth About De-Evolution, which references Island and showcases Devo's music.

The extras are presented in high-definition.

FINAL THOUGHTS:
Highly Recommended. The 1932 H.G. Wells adaptation Island of Lost Souls is a horror classic. Led by a creepy Charles Laughton performance, this early production uses then state-of-the-art make-up effects and art direction to create an isolated world where beasts become men and vice versa. It's an affecting story, well told, and not without a little danger. The restoration Criterion has here is excellent, and the extras are spectacular. Island of Lost Souls is full of tricks, and it's an absolute treat. 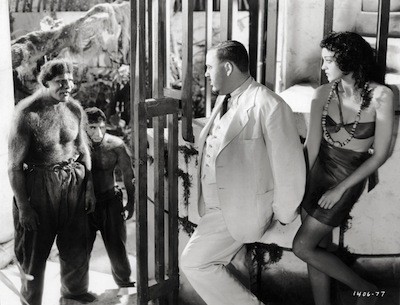