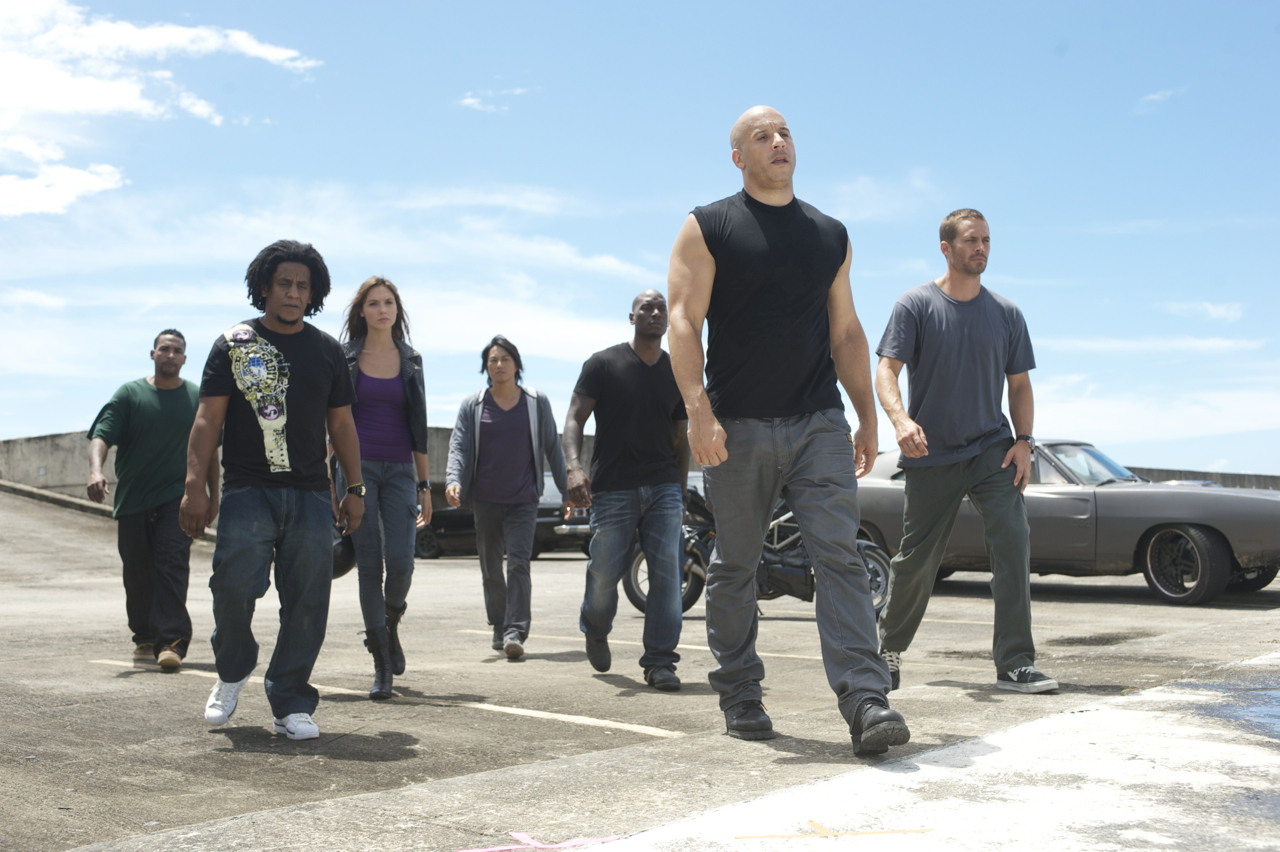 As a sixteen-year-old male, I was the target audience for The Fast and the Furious when it was released in 2001. Ten years and four questionably titled movies later, I still hold that distinction, and the franchise continues to improve with age. After some star shuffling for parts two and three, original cast members Vin Diesel, Paul Walker, Jordana Brewster and Michelle Rodriguez returned for 2009's Fast & Furious. Fast Five picks up where the action left off, and director Justin Lin again takes the reins. Fast Five adds a dramatic heist to the usual blend of fast cars, exotic locations and slick action, and series fans and casual viewers alike will enjoy the well-executed thrills that the film provides.

Former cop Brian O'Conner (Walker) and his girlfriend Mia Toretto (Brewster) free newly convicted Dom Toretto (Diesel) from police custody by running down the bus transporting him to prison. Afterward, Brian and Mia agree to lay low and meet Dom in Rio de Janeiro, Brazil. The pair arrives before Dom and agrees to join old friend Vince (Matt Schulze) on a job to steal some exotic cars seized by the Drug Enforcement Agency. Dom shows up just in time to watch the deal go south as employees of local drug lord Hernan Reyes (Joaquim de Almeida) kill several DEA agents and pin the murders on Dom, Brian and Mia. In an act of desperation, they decide to gather a crew of familiar faces to hit Reyes for $100 million so they can buy their freedom and stop running from the law. 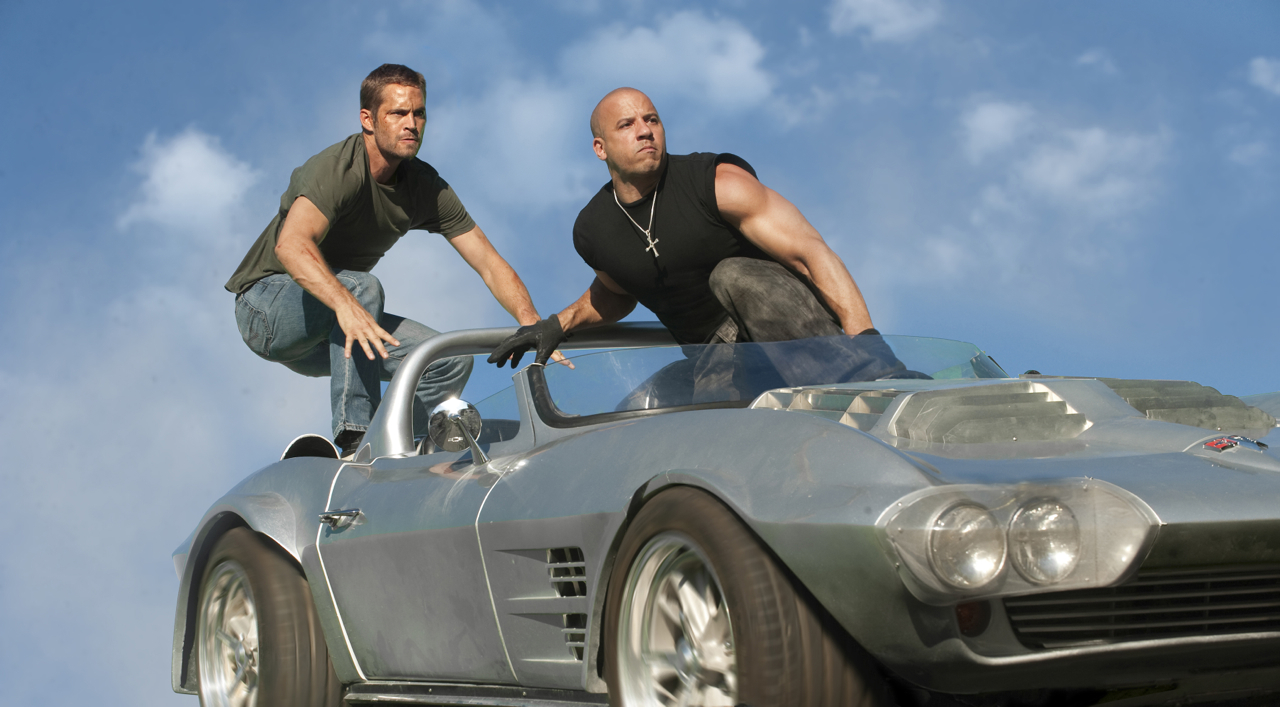 The fourth sequel to a summer blockbuster is expected to be a hollow reminder of what made the original film successful. Fortunately for Fast Five, the franchise to which it belongs is not comprised of carbon copies of the first film. Fast & Furious is the rare example of how to reunite a popular cast and move the story forward in a satisfying way. Fast Five continues this onward trek, and series favorites Roman Pearce (Tyrese Gibson), Tej Parker (Chris "Ludacris" Bridges), Han Lue (Sung Kang) and Gisele Harabo (Gal Gadot) return to fill out the ranks. New to the cast are Dwayne Johnson and Elsa Pataky, who play federal agent Luke Hobbs and Rio police officer Elena Neves, respectively.

What's new in Fast Five is the shift to less race-centric action. Gone are the neon-tinged street races of the earlier films, and in their place are tricky heist thrills. Hobbs wants to take down Dom and Brian, but Reyes is a more dangerous annoyance and the film's true villain. Make no mistake, the Fast Five crew is full of criminals, but they are the type of criminals who only steal from drug dealers and break the law to protect their families. These movies work because it's easy to appreciate the bond between Dom, Mia and Brian, despite their general lawlessness and inability to make an honest living. 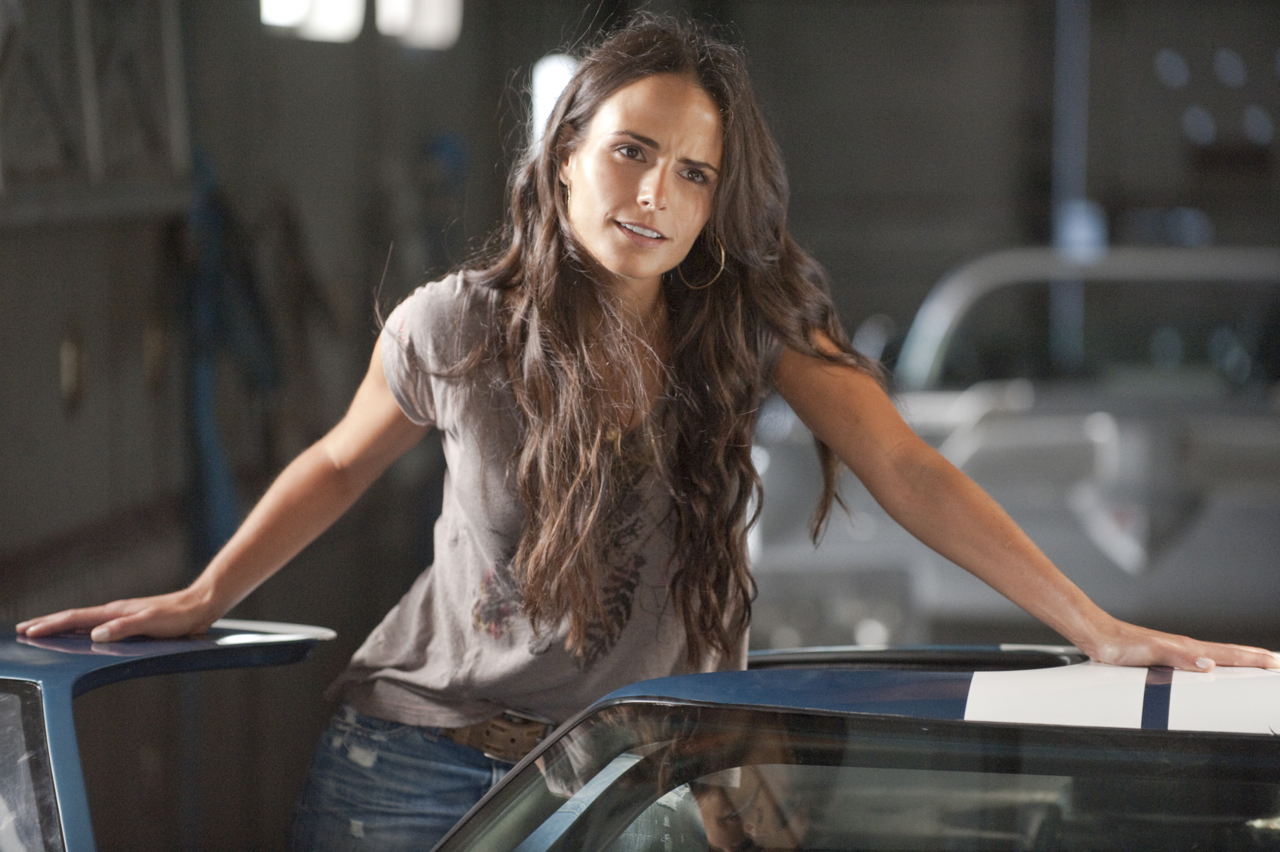 Lin, who also directed The Fast and the Furious: Tokyo Drift and Fast & Furious, brings a sharp eye for action to Fast Five. The highlight of the film is an extended sequence where the heroes tow a bank vault through the streets of Rio de Janeiro, creating much havoc. Lin and his team worked hard to practically stage the stunts instead of relying on CGI, and this effort shows on film. The extreme driving feels absolutely real, which makes the action all the more exciting. Races may no longer anchor the plot, but the film doesn't skimp on exotic cars. The flashy rides of Fast Five include a Corvette Grand Sport, Porsche GT3, Dodge Police Interceptor and the tank-like Gurkha LAPV.

As far as action entertainment goes, Fast Five is a solid offering, despite making its protagonists nearly invincible and increasingly lawless. These are small criticisms for a movie whose 131 minutes feel like 90 thanks to its breakneck pace and pleasing mix of sets and stunts. I look forward to meeting up with these characters again in the inevitable follow-up. Fast Five proves that sometimes you can keep a good thing going. 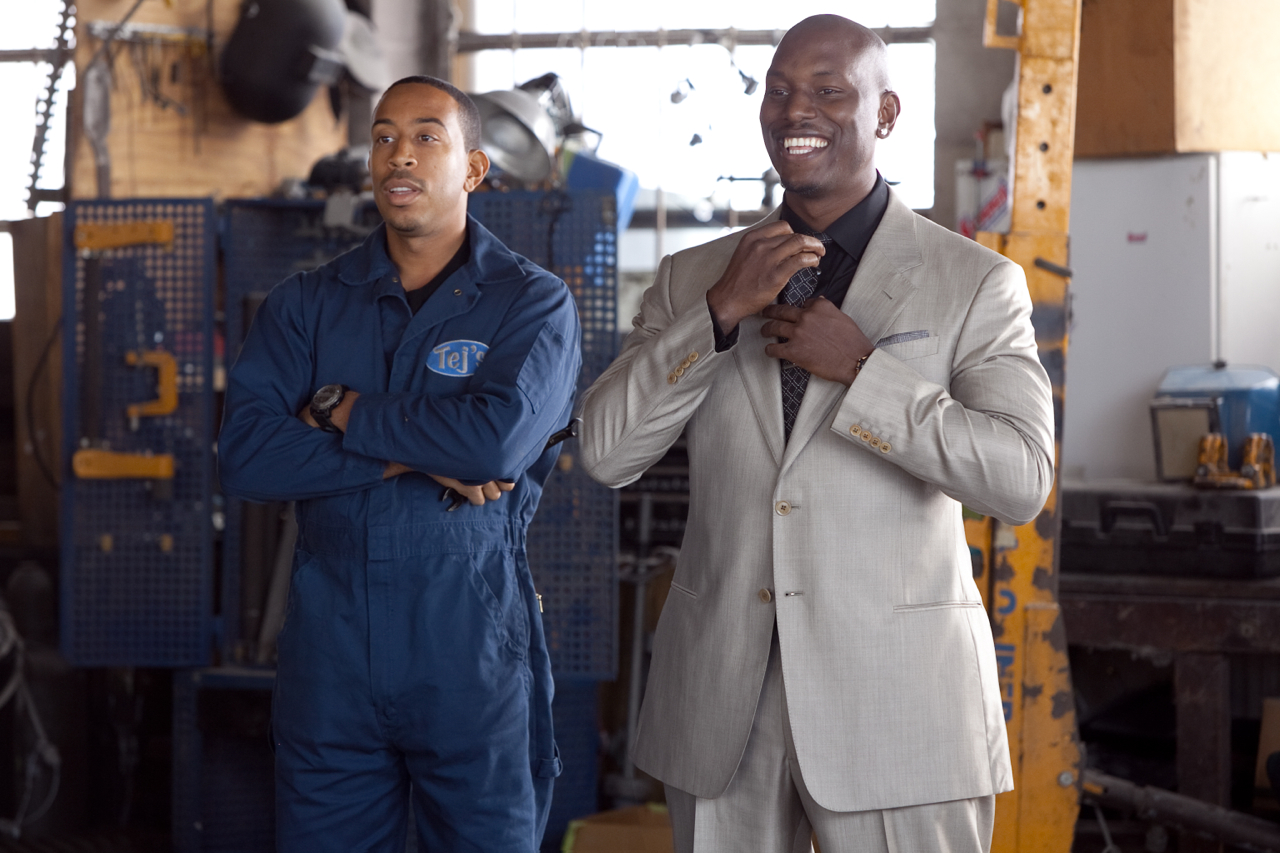 Universal continues to churn out excellent Blu-rays for its recent releases. The 2.35:1/1080p/AVC-encoded transfer for Fast Five complements the film's sunny Rio de Janeiro setting and slick action scenes. Detail is expectedly excellent, and the image is constantly sharp and heavily textured. Colors are vibrant and perfectly saturated, and skin tones are warm but accurate. Grain is minimal, but the image retains a film-like appearance and exhibits no signs of grain reduction or edge enhancement. The transfer also handles nighttime scenes with ease, as blacks are solid and rarely crush. Every glistening exotic car explodes from the screen, and the transfer remains crisp and clean through all of the frenetic action sequences.

The film's 5.1 DTS-HD Master Audio track is a raucous affair, and more than pulls its weight to keep the action going. Dialogue is consistently clear, whether delivered from the front speakers or shot from the sides and rear. The entire sound field comes alive as Brian, Dom and company swerve through the Brazilian streets, and the effects and score are expertly balanced. The LFE is healthy and deep, and sonic pans roll through the surround speakers without the slightest hint of interference. Gunshots, explosions and squealing tires all race throughout the sound field, providing the listener with a theater-quality mix. Spanish and French 5.1 DTS tracks and a DVS track are also available, as are English SDH, Spanish and French subtitles.

Fast Five receives Universal's usual "combo pack" treatment, and the set includes the Blu-ray, a DVD copy of the film and a downloadable digital copy. A glossy, embossed slipcover surrounds the standard Blu-ray case. Collectors will likely not be pleased that the outer packaging does not match the Blu-ray releases of the first four films.

The Blu-ray includes two versions of Fast Five: theatrical (2:10:28) and extended (2:11:35). The hits in the favela gun battle seem bloodier in the extended cut, but I noticed no other major differences between the two versions. Universal fills the disc with the following extras, all of which are presented in high definition. 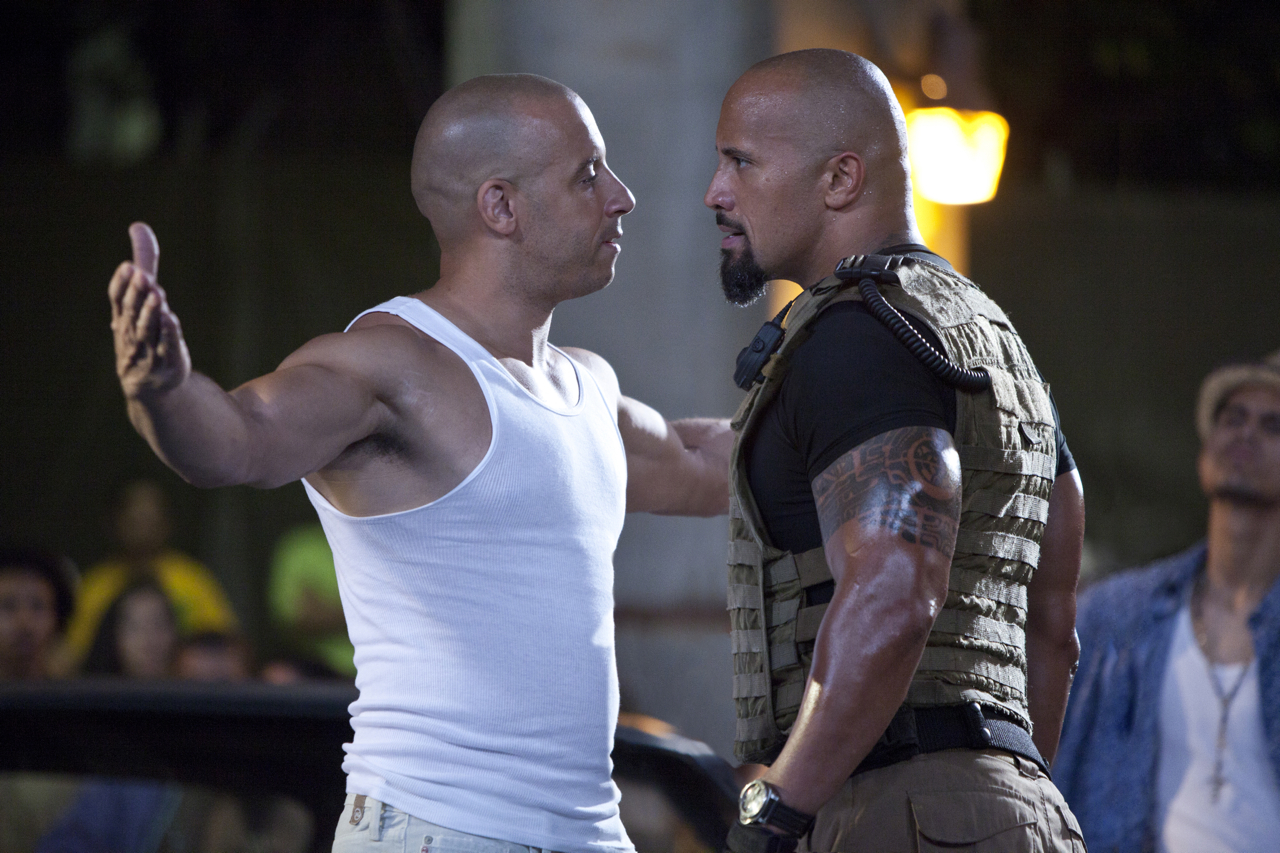 Fast Five is the fifth film in a series that doesn't appear to be running out of gas. Paul Walker, Vin Diesel and director Justin Lin return for this entertaining summer blockbuster in which the protagonists plot to steal $100 million from a Brazilian drug lord. The stunts are bigger and benefit from their practical construction, and the actors are at ease in their familiar roles. Fast Five is the most satisfying and accomplished film of the series so far. Universal's Blu-ray receives high marks all around. Highly Recommended