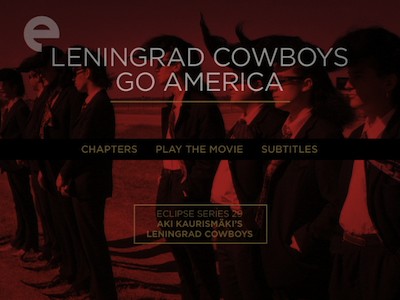 The 1990s were a weird time for independent film. For as lacking in character as much of popular culture was during the early part of the decade (you can keep the music; no, seriously, keep it), film got really quirky and odd. Much of this was attributed to Steven Soderbergh and Sex, Lies, and Videotape and the impact of the Sundance Film Festival. Soderbergh's debut effort came out in 1989, the same year Finnish filmmaker Aki Kaurismäki released Leningrad Cowboys Go America (79 minutes), a bizarre hybrid of mockumentary and road trip pictures that was right in line with the cinema to come.

Though, to be fair, Kaurismäki was more part of the previous generation of maverick filmmakers, including his influential admirer, Jim Jarmusch, who also appears in Leningrad Cowboys Go America, the first movie in Eclipse's Aki Kaurismäki's Leningrad Cowboys boxed set. The silver-haired New York director plays an auto mechanic who sells the European rock band the car that they will drive across most of America on their way to Mexico. Given the back and forth between the two movie men, it's a fitting metaphor. They trade their tools and share in the act of creation. 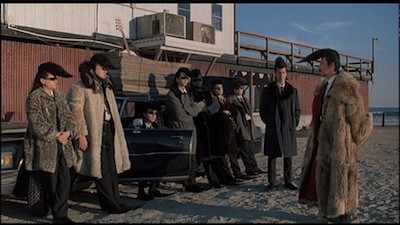 Leningrad Cowboys Go America is sort of like a mix of This is Spinal Tap and A Hard Day's Night. The line between the fiction and the reality that informs it is blurred. This could be a fake band pretending to go on the road, or it could be a real band pretending to go on the road. The operative word is "pretending." Kaurismäki took a Finnish group called the Sleepy Sleepers and turned them into a Russian band lacking in musical identity but overflowing with image. They are like a parody of the Soviet embrace of American pop following glasnost. Their extended pompadours and pointy shoes make them look like characters out of a Grimm fairy tale, some kind of Rumpelstiltskin in pimp clothes. Their music begins as traditional European folk, complete with accordion and brass, but morphs into rockabilly and punk as they travel the U.S. It's not hard to imagine a young Eugene Hutz seeing this movie and getting the inspiration for Gogol Bordello.

The music is fairly entertaining, with echoes of the performance art element of New Wave bands like Devo and Talking Heads. Some of the performances in the movie can be a little clumsy. The lip-synching can be pretty poor. Still, there is something amusing about the Monkees-esque comedy of the guys breaking out into songs they've never rehearsed just to fit in at their latest pick-up bar gig. 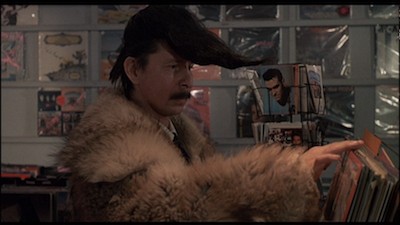 The rest of Leningrad Cowboys Go America is not nearly so amusing. Kaurismäki pushes the fish-out-of-water humor as far as it will go. The story essentially revolves around the band's manager Vladimir (Matti Pellonpää) keeping the guys moving and working, from the Big Apple down to Mexico where they are going to play a wedding for the relative of a scumbag promoter. Vladimir hoards the cash, spending it on beer and cracking the whip on the others. They are also hauling one of their fallen comrades, a guitarist who froze to death back home, on the roof of their car to show him the world before he is buried. And they also run into a long-lost cousin (Nicky Tesco), who works in a gas station.

While some of the antiquated plotting works, I have to admit that much of Leningrad Cowboys Go America seemed overly tame and contrived. The humor is silly and often lazy, and very much a product of its time. Remember, how I said it was weird back then? Leningrad Cowboys Go America is a movie where everyone seems to know they are being weird, and it kind of falls flat as a result. I know it was quite popular when it came out, but you know, tastes change. I'm also not saying Leningrad Cowboys Go America was bad, more that it was just inoffensive to the point of being ineffectual. It's like a cute MTV promo that a band would have made back then, relying on the group's image more than quality storytelling, like a Herman's Hermits or Elvis Presley movie. Only this time the band has no prior recognition or hit songs to float them by. 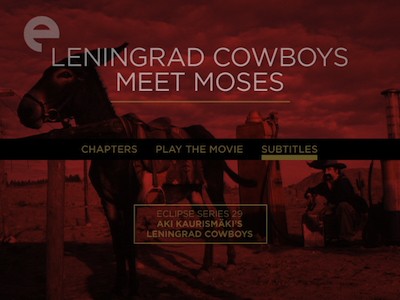 Though, to be fair, the Leningrad Cowboys would eventually take on a life of their own. Perhaps a more apt reference point is 1991's The Commitments, Alan Parker's hit movie about the Irish soul band that began as an acting ensemble initially put together for the picture that then jumped out of the film and became a real group for a while. The Leningrad Cowboys continued to play and tour after the first movie and before returning in a sequel. The second film, Leningrad Cowboys Meet Moses (1994; 94 mins.), follows the same basic premise of the first film, only now the journey is reversed. After several years as a successful band in Mexico, the Cowboys, now decked out in day-glo bandito gear, have drank away their fortunes on tequila. An offer to reform takes them to New York, where they discover the interested promoter is actually Vladimir. He has grown a beard, gotten a sliver of religion, and started calling himself Moses. He wants to make amends by leading his people back to Siberia. So begins a transcontinental road trip, once more full of ups and downs, peaking when the guys again realize Vladimir is cheating them.

Leningrad Cowboys Meet Moses is a kind of a mess. For whatever peculiarities marred Leningrad Cowboys Go America, at least they had a modicum of authenticity. By comparison, Leningrad Cowboys Meet Moses' humor is forced and lacking any grounding. Kaurismäki tries to turn this journey into a religious quest, complete with familiar iconography (a burning bush, a golden calf, etc.) and political opposition (a man named Lenin trades Marxist slogans with Vladimir's bible verses). There is also an absurd plot about Vladimir stealing the nose off the Statue of Liberty.

One thing I will give the second movie is that the music is more varied and thus comes off better. The performances are more polished and the material selected represents a more striking range, befitting the European setting. The best number is a tune reminiscent of '60s French rock, sung by Elijah (Andre Wilms), an agent pursuing the stolen nose. Perhaps it's fitting then that the final film in the trilogy, the hour-long Total Balalaika Show (1994), is purely a concert documentary. Shot in Helsinki in 1993, Kaurismäki captures the massive gathering of the Leningrad Cowboys with the 150-member Alexandrov Red Army Chorus and Dance Ensemble. Backed by this orchestra and choir, and standing in front of a huge audience filling the Senate Square, the Cowboys appear as tiny figures running through covers of familiar American hits and traditional Russian folk songs. They size of the concert nearly swallows them, but credit where it's due, they carry on admirably. 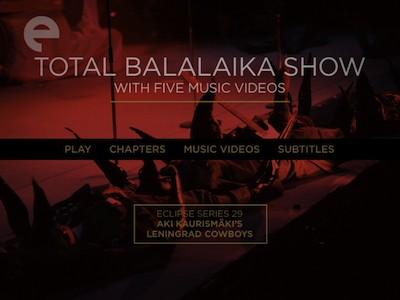 Kaurismäki shoots Total Balalaika Show with few frills. It seems about all he can do to just contain the stage in frame. He matches the aesthetics of the fictional films by using title cards to announce each song. The finished documentary suggests Total Balalaika Show was probably a concert that was more fun to attend than to watch on video. Given the size of the show, the musicians play to the cheap seats. The big gestures flatten out when boxed in this way. The songs themselves also lack much passion. This is kitschy theatre more than anything. The Cowboys don't exhibit much visible connection to songs like "Sweet Home Alabama." Only the more universal themes of something like Dylan's "Knocking on Heaven's Door" survive their mechanical accents and predictable musical arrangements--and even that is due in large part to the brass and the men's choir adding their grand tones. I closed my eyes and listened, and couldn't imagine anyone choosing to play a record of these songs all on their own. (Same goes for the five music videos, including one lazy rendition of the Doors track "L.A. Woman," that round out the third disc.)

It's hard for me to say if I got in a time machine and went back to see Aki Kaurismäki's Lenigrad Cowboys movies when they were first released if I would feel differently about them now. They are films very much of their time, utilizing a brand of twee anarchy that seemed fresh at the turn of the 1990s but that comes off as oh so quaint and stale now. Such self-involved humor can be a little tedious, and likely wouldn't survive without the music to break things up. Aki Kaurismäki's Lenigrad Cowboys is a well-intentioned, but essentially misguided lark. 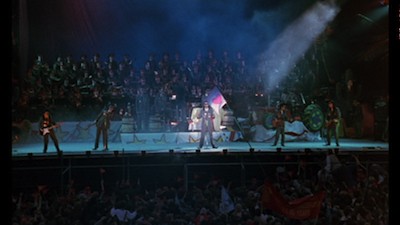 Video:
The widescreen films, presented at a 1.85:1 aspect ratio, look fairly good, though they haven't been given a super restoration job. In Leningrad Cowboys Go America, there are occasional marks on the print, including at least one instance of a hair--so old school! The image is grainy, but not in any consistent way, or even in any way that suggests fault with the DVD transfer. More, the film just shows its age. Colors look petty good, though. The other two films fare about the same.

Sound:
All of the movies are mixed in stereo, with subtitles for the foreign-language parts. The audio sounds decent, with solid levels and no glitches. The dialogue and the music are both clear and there is no distortion.

Extras:
The Eclipse Series 29 box is like the previous series entries: individual slimline cases packed in a cardboard slipcover. Each case has printed liner notes.

Disc 3 has five music videos from the Cowboys, for the songs "Rocky VI," "Thru the Wire," "L.A. Woman," "Those Were the Days," and "These Boots," which were also directed by Kaurismäki.

FINAL THOUGHTS:
The latest Eclipse series may be an acquired taste. The quirky chronicles of a semi-faux European band as they trek across America and back to Siberia seems quaint and contrived, though they were popular once upon a time and the Leningrad Cowboys still tour apparently. The three films in Aki Kaurismäki's Lenigrad Cowboys are two fictional comedies and one large-scale concert. They are all just fine, if slightly tedious. Rent It. 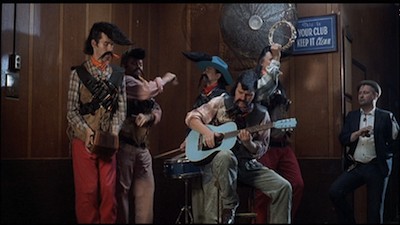