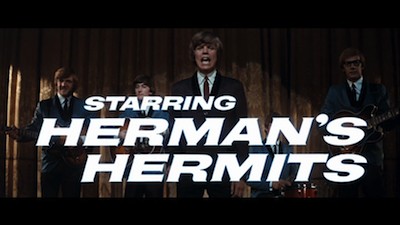 Oh, rock 'n' roll, you so crazy! You make all the teenaged girls scream themselves right out of their bikinis. Even if you do just want to buy them a double scoop of strawberry ice cream.

For all the mythology about how dangerous Elvis Presley's pelvis was in the early days of rock music, it didn't take long for the rebellion to be pacified and commodified. Blame Hollywood, and blame Elvis for going there. I am a big fan of Herman's Hermits, I am not going to pretend otherwise, but watching the 1966 teensploitation flick Hold On! gives me some insight as to why more smarmy music fans have scoffed at my love of Peter Noone and the lads over the years. This comic turn by the pop band is about as safe and inoffensive as you can get, a movie that lies somewhere between A Hard Day's Night and the Monkees--the missing link, if you were--but without the charm or goofball energy of either. Hold On! is totally safe entertainment. Hell, Hold On! is actually about proving that Herman's Hermits are safe for popular consumption.

Hold On! opens at a London airport as Herman (a.k.a. Peter Noone) and his players, disguised as police officers, sneak past the panting throngs, getting on a plane bound for America and a big concert at the Rose Bowl in Pasadena. Naturally, there is a bobby-soxer stampede on both sides of the Atlantic, the boys inspire mayhem wherever they go. Which is why it makes absolutely no sense that their manager (Bernard Fox) hires women to faint at their shows. But then, dissecting Hold On! for the sense it does or does not make is a slippery slope. Like wondering why vegetarian bacon doesn't actually taste like bacon.

Anyway, the big to-do is that the American astronauts have asked their children what they should name their new rocket, and the kids have voted Herman's Hermits. Scared that putting the name of cheeky British boys on a U.S. phallic symbol will kill our national boner for space travel, the government sends their closest available man (Herbert Anderson from Dennis the Menace) to find out what the hullabaloo is all about. The meek secret agent trails the band to California, eventually running afoul of a sexy actress (Sue Ann Langdon) trying to cozy up next to Herman for publicity. Meanwhile, Herman himself yearns for normalcy. He just wants someone to talk to. Enter Shelley Fabares, formerly of The Donna Reed Show and also Elvis' main squeeze in Girl Happy, and I think a permanent fixture in the Guinness Book of World Records under the category "Most Adorable Teenage Girl of All Time."

Hold On! was directed by Arthur Lubin, the man behind the camera of The Incredible Mr. Limpet and 131 episodes of Mister Ed. Lubin is clearly doing a job here, and no disparagement, he does it well. Hold On! is likely exactly what all the moneymen hoping to cash in on the rock phenomenon and snatch a little adolescent coinage wanted. It's not an inept effort, it's even kind of charming for its first half hour or so, and it passes by with nary a thought for the time, it's so insubstantial. The plot, such as it is, pings between comedy routines and brief romantic scenes (Herman and Shelley never really kiss) and presents neither with any real earnestness or originality. It is what it is, and Hold On! actually perks up when the band performs. There aren't a lot of hits here, the only big singles featured are the title track and "A Must to Avoid," but there are some good album cuts and if you like Herman's Hermits, the music is why you probably picked up Hold On! in the first place. While the gaps between tracks get more noticeable the longer you watch, when the tunes do kick in, they prove good enough reason to stick it out till the end.

Plus, if you don't, you'll never know if the band gets their name painted on a big white phallus! 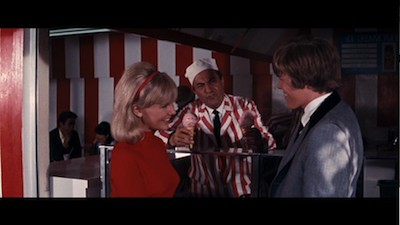 Video:
Shot in Panavision, Hold On! comes to the Warner Bros. movies-on-demand Archive Collection at a full 2.4:1 aspect ratio. The look of the DVD is fairly average, there isn't a lot of clean-up, so there are scenes with scratches and fuzz, and then there are plenty with neither. Colors are okay, maybe a little washed out, and resolution can be soft, too. Still, for a lower-grade B-movie like Hold On!, it's not a terrible presentation. Like the movie itself, this DVD gets the job done.

Sound:
The basic mono mix of Hold On! is pretty solid, with clear tones and no extraneous noise. The music comes through strong, which again is probably why you are watching the film in the first place, so win!

FINAL THOUGHTS:
Rent It. Do you like Herman's Hermits? Do you like Shelley Fabares? Then those are two reasons for watching Hold On!. There aren't really any others. You get some fun songs and you get some cute, full stop. Not a bad way to kill 86 minutes, all told. 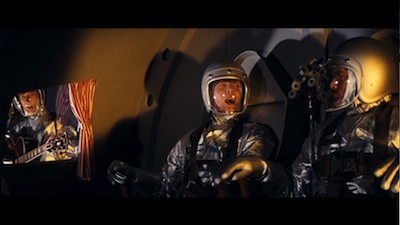