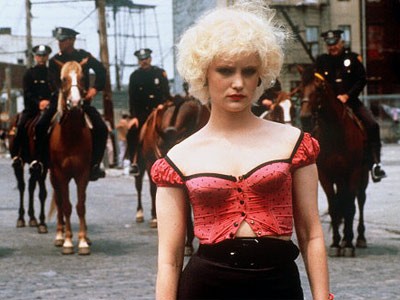 Being transgressive as an artistic goal can make for iffy filmmaking (or composing, or writing, etc.), but it is by no means a death sentence; in fact, it may be because so much great cinema is both artistically brilliant and transgressive (from Un Chien andalou to A Clockwork Orange) that the one quality is sometimes mistakenly assumed to lead directly to the other. (Many would disagree with my own use of Fight Club as the preferred illustration of that misguided assumption in action, but we can all think of "edgy," "dark" films that are also shallow and vacuous.) The filmography of German director Uli Edel, who made the 1989 film Last Exit to Brooklyn (based on the novel by Hubert Selby, Jr., an icon of the transgressive in American literature) nicely demonstrates that, to be of any real interest or value, your transgressive work needs something more than just the will to provoke, shock, and/or titillate the audience; it needs a convincing reason for doing so. Edel's The Baader Meinhof Complex (2008) was a fascinating look at a group of notorious terrorists that was quite effective and well-received; on the other hand, his feature Body of Evidence (1993), which purported to explore the shocking darker side of sexuality, is one of the most derided, ridiculous films of all time. Last Exit to Brooklyn was made before the other two, and the place it occupies is, in terms of artistic merit and watchability, somewhere between the very-good and awfully-bad poles they represent. 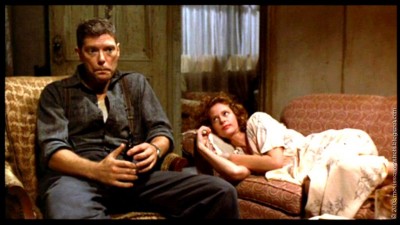 The story takes place in the Brooklyn of 1952 (long before that borough's gentrification into the Hippest, Indie-Rockest place on earth). As depicted here, Brooklyn is an endless, damp, dark, and barren shipyard, as well as a bullpen for soldiers about to be shipped off to Korea. It is a group of the latter who make the mistake of drunkenly taunting the trollop Tralala (a platinum-blonde, gutter-Marilyn Jennifer Jason Leigh), which leads to a chase and a vicious beating at the hands of the neighborhood gang of hoods (including Stephen Baldwin and Sam Rockwell); this is the same gang that lies in wait and mugs the would-be johns she lures into a grimy vacant lot. Tralala is aggressively sexual and proud of her distracting physical qualities; the only platonic relationship she seems capable of is with Spook (Cameron Johann), a teenager who has a crush on her and with whom she has a teasing rapport based on his fantasy of fixing up a motorcycle so he can take her on a ride. 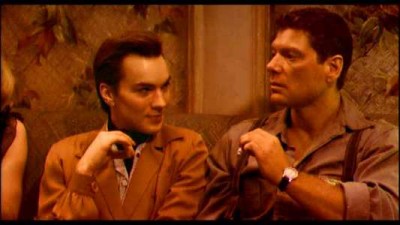 Spook's family life is troubled; his sister (Ricki Lake) has gotten knocked up, to the furious disapproval of their father, Big Joe (Burt Young), who's already out of sorts because of an ongoing strike that seems to have put the entire neighborhood out of work. At the head of this labor action are union boss Boyce (Jerry Orbach) and another of the film's central characters, shop steward Harry (Stephen Lang). Harry's home life is much more disturbed than Big Joe and Spook's; a new father, he is indifferent to his child and sexually uninterested in his wife, being instead drawn to the queer crowd that includes flamboyant transvestite Georgette (Alexis Arquette) and the gold-digging young dandy who goes by Regina (Bernard Zette), with whom Harry begins to shirk his familial and job duties, and on whom he unethically and disastrously blows his union expense account. Tralala may find true love with a soldier who's about to ship out, Spook is in love with Tralala, and Harry thinks he's in love with the cruel Regina; they are the movie's heroes because they dare to feel passion and love, however foolishly. But in Selby's worldview, the only heroism is martyrdom, and the film is filled with the animalistic brutality of a world of which Brooklyn is but a microcosm, a carnivorous world where refusal to partake only means you'll be the next one eaten. 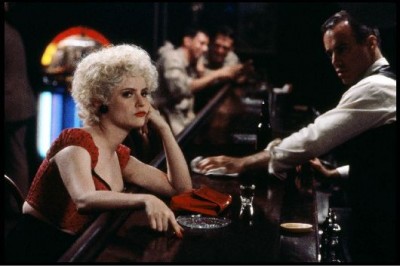 Such a melancholy, challenging observation of humanity as a non-stop, pecking-order hierarchy of the rapacious and the deluded can also be found throughout the work of Edel's fellow countryman, R.W. Fassbinder; but Edel, unlike that great master with his bold melodramas (or even Darren Aronofsky, who found a suitably heightened, musical style for his own Selby adaptation, Requiem for a Dream), is a competent filmmaker but one with no discernibly personal style. The approach he adopts in Last Exit to Brooklyn is to borrow around: at its best, the film works in a self-consciously artificial mode (one that was current in the transgressive filmmaking of the time; there are definite traces of Cronenberg (Naked Lunch) and Lynch (Wild at Heart) here) in which Brooklyn becomes "Brooklyn," an idea, and looks like a very production-designed set despite the location shooting. At its worst, though, it becomes painfully obvious that Edel has no Brian de Palma-ish flair for garish symbolism, and when Selby's story calls for it, this director does not have the film-grammar equivalent of the writer's stylistic tools to make it convincing, and the film becomes merely pretentious. Another pro: the film's round of fine performances, capped by a brave and heartbreaking (but never for a second sentimental) turn from the then newly-discovered (as a serious actress) Jennifer Jason Leigh. But another con: the score by Mark Knopfler (of Dire Straits), which is suitably Badalamenti-like at times but all too often degenerates into sub-John Williams blandness that Edel is only too happy to match with bizarrely soaring "dramatic" moments, "beats" like the moment the film closes on, which would be a bore in any movie but are absolute sore thumbs here. In short, Last Exit to Brooklyn has some genuinely interesting stretches and some elements that are worthy of our attention and engagement, but its lack of a very strong vision and its intermittent sops to convention counteract its virtues, rendering it a muddled, interesting half-success.


The disc's AVC/MPEG-4 encoded, 1080p-mastered, anamorphic-widescreen (aspect ratio 1.85:1) transfer looks fantastic. This is, thanks to cinematographer Stefan Czapsky's (Ed Wood) intriguing and accomplished work, a visually striking, very dark, artificially-lit film; but all the blacks are solid, all objects and figures in dimly lit scenes are as clearly visible as they're intended to be, colors (particularly Leigh's bottle-blonde hair and bright-red lips and wardrobe) pop, and skin tones look stable, warm, and natural throughout.


The DTS-HD Master Audio 5.1 soundtrack is phenomenal; with its vast surround-sound scope, it is actually almost too much for a movie of this scale (a sense of its own scale and proportion being one of the film's problems). But the sound quality is terrific; all the dialogue, music, and traffic noise--not to mention crowded bars, riots, and explosions--are laid out and balanced flawlessly in a speaker-filling, sonic environment-creating achievement of well-mastered, resonant, crystal-clear sound.


--Feature commentary with director Uli Edel and screenwriter Desmond Nakano, in which one can discern from whence sprang the film's strengths and weaknesses, as the two alternate back and forth between some fairly insightful and impassioned readings of the characters and explanations of their screenwriting choices, and intermittent lapses into screenwriting-workshop-speak that makes them sound neither interested nor qualified in the right way for adapting Selby's book to the screen. They seem to regard themselves as very brave and on-the-ball, but their definitions of bravery and artistic choices of depth are, as revealed both by the film and their exchange here, rather too limited to make Last Exit to Brooklyn anything like a wholly successful film.

--"The Making of 'The Last Exit to Brooklyn''': A 45-minute quasi-documentary on the making of the film, featuring some very interesting footage of the sets in Brooklyn, the shoot, and some rather desultory interviews with Edel and producer Bernd Eichinger. Eichinger's comments on being inspired by the book actually come across as fairly dense and defensive; he seems to have only half-understood it, which perhaps offers a revealing peek into the roots of the film's problems. The best part is the considerable amount of footage with Selby, which is what ultimately makes it worth tolerating the cheesily written, portentously read, bad-featurette-like narration (which claims things like "This is a property that was too hot of a potato for Hollywood to handle; it took these two men [cut to Edel and Eichinger] to bring it to the screen.").


Last Exit to Brooklyn lacks a strong, guiding vision, and its self-conscious "transgressiveness" veers wildly between tragic romanticism that works and plain old pretentious silliness that doesn't. But Uli Edel's adaptation of Hubert Selby, Jr.'s very sad, very violent ode to losers, misfits, and working-class strugglers has enough going for it--and looks and sounds so good on this Blu-ray release--that it's worth a familiarizing look-see (especially for Jennifer Jason Leigh's performance), if not actually adding to your collection. Rent It.