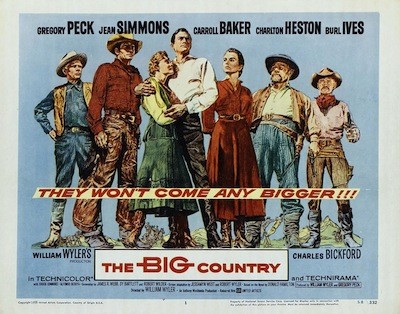 My first encounter with The Big Country was a couple of years ago. I wasn't familiar with William Wyler's 1958 film until George Clooney was talking about how he borrowed a scene from it for Leatherheads. When Clooney's character goes and gets John Krasinski in the middle of the night and takes him outside to settle their differences without anyone else spying in, that's a direct lift from The Big Country. Gregory Peck does the same with Charlton Heston. They need to fight, that's inevitable, but the score is between them, and there is no need for bragging or showboating.

It's a pretty impressive fist fight, with both men whaling on each other until neither of them can stand up. It's also central to understanding Gregory Peck's character in the film, and really, the whole of Wyler's message. Life's hurdles are for each individual to tackle in his or her own way, and though might may sometimes be required, it may not always make right. This didn't all sink in the first time I watched The Big Country, but seeing it again, I am awed by Wyler's expansive transformation of the cowboy epic into a politically relevant tale of personal responsibility and ethics.

The Big Country is based on a novel by Donald Hamilton, perhaps best known now as the creator of the Matt Helm character (Dean Martin played Helm in four movies in the 1960s). Wyler and a team of writers bring Hamilton's book to the screen as a western that is as grand in scope as the open land allows, but as deeply personal as human drama demands. Peck plays James McKay, an East-coast gentleman and former Navy man who travels West to join his fiancée (Caroll Baker, Baby Doll) at her family home. When he arrives, he is immediately out of place. His bowtie and rounded hat say "dude," and the local roughnecks immediately doubt his suitability as husband for one of their own. In particular, Steve Leech (Charlton Heston), the foreman on the girl's family ranch, doesn't like this dandy threatening his own place in the scheme of things.

But it's not just McKay's clothes that set him apart, it's also his attitude. Little did he know that by joining with the Terrill family, he was signing on to a long-running feud between the well-to-do Major Terrill (Charles Bickford, Brute Force) and a neighboring rancher, the less successful Rufus Hannassey (Burl Ives, who won an Oscar for his performance). Their main squabble is over the Big Muddy, the land that separates their properties, a lush spread with a healthy water supply. Since its owner died, leaving the deed to his granddaughter (Jean Simmons, The Robe), each man has fought to get his hands on the property and cut his rival out, even though the woman has every intention of honoring her grandfather's promises and letting both water their cattle on the Big Muddy.

The truth is, neither Terrill nor Hannassey are really fighting over water. Their bitterness goes deep down, and it's indicative of class divides and social ranking. Major Terrill is respected and rich. He calls Hannassey and his boys "the local trash;" Hannassey, in his blistering opening speech, calls Terrill "a high-tone skunk." As McKay learns more about this feud, the murkier the motivations of each man becomes and the obvious first impressions lose their luster. It also becomes harder and harder for McKay to stick to his own principles, as the natural suspicion of outsiders undercuts him at every turn. It would be easy to show up his detractors. When he first arrived on the ranch, Leech tried to haze him by putting him on the farm's most ornery horse. McKay beggared off, though later that day, returned to the corral and kept getting on Old Thunder until it stopped bucking him off. He knew he could do it, he didn't need outside validation.

James McKay is another of Gregory Peck's great screen heroes, a man as philosophically and morally resolute as the progressive reporter he played in Gentleman's Agreement or his career-defining turn as Atticus Finch in To Kill a Mockingbird. Peck is the very embodiment of intelligent masculinity. While watching The Big Country, I texted a friend and said, "Damn, I'd like to have a drink with Gregory Peck." He is stoic and smooth as McKay, displaying plenty of backbone but in a manner that is quietly assertive rather than shouty or violent. He also gets to be funny and romantic, particularly in his scenes with Simmons. There is at least one laugh-out-loud moment when he feigns being queasy during their contest of who has the most gruesome story from their respective adventures.

William Wyler was no stranger to big productions. A decade prior he had made The Best Years of Our Lives, a multi-layered portrait of post-War American life. Though The Big Country doesn't branch out in quite the same way as that film, it is no less impressive in terms of how Wyler handles large themes. He expertly moves from contemporary life to the untouched countryside of America's past, appropriating it as a backdrop where these near-mythic conflicts can play out. The Big Country was photographed by Franz Planer (The Nun's Story, Breakfast at Tiffany's) using the widescreen Technirama process (a Cinemascope knock-off). Wyler and Franz use the gorgeous mountains and untouched plains of California and Arizona as their canvas, drawing their drama under the blue skies and using the grandeur to show both the smallness of human pettiness and also how majestic individual endeavor can be when placed in the context of the big, beautiful world we live in. Their compositions are fantastic, particularly in the final scenes of conflict. Gunmen dot the landscape as far back as the camera eye will permit.

For western fans expecting quick-draw showdowns and black hat/white hat morality, The Big Country likely won't be your thing. For those who want something a bit more enriching, who want to see complicated men wrestle with maintaining a personal code of honor and maybe get a little romance for good measure, then The Big Country is soon to be one of your new personal favorites. As another friend pointed out, this is like The Quiet Man set in the American West, with all the expansiveness such a transplantation implies.

Video:
The Big Country comes to Blu-Ray as an anamorphic widescreen transfer, shown at a 2.35:1 aspect ratio and encoded at 1080p. Colors are nicely rendered with a decent grain preserving the 1950s palette. The print is relatively free of dust, dirt, and scratches, though it does appear soft at times. There are also instances in the middle of the movie, particularly looking at the vast countryside, where the frame appears to pulse, almost like there is a heartbeat underneath it. I thought my eyes were playing tricks on me. Luckily, this passes quickly and outside of maybe three times, doesn't appear again. Overall, a decent quality image transfer, with a particularly strong sense of depth, which works wonders on the landscape shots.

Sound:
The main audio soundtrack for The Big Country has been mixed in a mono DTS-HD Master Audio. It sounds impressively full, with appropriate bombast but also good silences. I didn't notice any hiss or off tones, and every sound and snippet of dialogue rings clear even when turned up loud.

There are also optional Spanish and French mono mixes, as well as subtitles for both languages and a closed-captioning track for English speakers.

Extras:
In addition to a trailer and television commercial for the film, there is also a five-minute vintage promo reel, "Fun in the Country," narrated by Jean Simmons.

FINAL THOUGHTS:
Highly Recommended. The Big Country is a thinking-man's western, at once a social drama, a family epic, and the chronicle of one man's personal journey from East to West (call it an "existential Manifest Destiny). Director William Wyler casts Gregory Peck in the role as the rugged individualist whose ruggedness is not so apparent, but whose reserve strength eventually earns him the respect of his newfound peers. Featuring great performances by Peck, Charlton Heston, and an incendiary Burl Ives, as well as gorgeous photography of the untouched American countryside. Well worth your time.