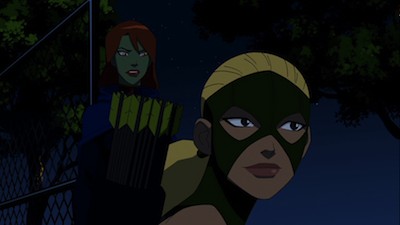 Warner Bros. continues to release its Young Justice cartoon series in disappointingly small slivers. Season One, Volume Two continues the tradition of its preceding installment in that it is a barebones disc with a measly four episodes. We're talking about 22 minutes a show, 90 minutes a disc, and probably at least six discs before all of the season finally makes it to DVD. I suppose this is something fans are going to have to get used to. Even if there is a full season collection coming, it's probably a while off and unless it has a great price point, won't be much more substantial as a package than what you can buy individually.

Young Justice - Season One, Volume Two picks up where Volume One left off. Whereas the original disc was focused largely on the liberation of Superboy from his corporate creators and the formation of the Young Justice team, this cycle of shows is tied together mostly by the introduction of final team member Artemis (voiced by Stephanie Lemelin), a girl sidekick for Green Arrow, taking over for Speedy (who actually appears in episode 6, "Infiltrator," to announce that he is Red Arrow and his being replaced by a girl is the last straw in his contentious relationship with Oliver Queen). Artemis joins Kid Flash, Aqualad, Superboy, Miss Martian, and Robin to make a sextet, and there are hints to a deeper backstory to this girl from the mean streets of Gotham. Adult superheroes also make appearances. In addition to Green Arrow, we get Batman, Superman, Red Tornado, Black Canary, and Aquaman. Villains include Amazo, Abracadabra, and Black Manta. 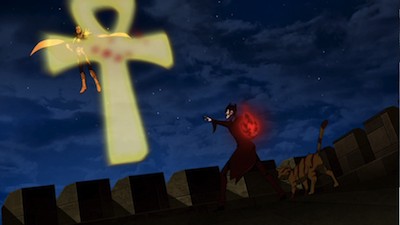 Despite my complaints about the stingy DVD selection, I must admit to quite liking Young Justice. It doesn't necessarily break any new ground, but the team dynamic is excellent and the action is genuinely fun and exciting. Each teenager is given a unique personality and in doing so, it provides the writers a great opportunity to use the diversity of the group to make the plots more interesting. Superboy's moodiness sparks Miss Martian's caretaking instincts, though her klutziness and shyness get in the way. Kid Flash likes Miss Martian, though his constant disagreements with Artemis suggest there is more to be explored between them. Robin's cockiness is off-set by Aqualad's reserve. There also appears to be room for solo adventures, as evinced by episode 8, "Downtime," when Aqualad returns to Atlantis after becoming homesick.

That said, it's ironic that my favorite episode on the disc is the 7th, "Denial," if only for the injection of a couple of characters I am predisposed to like more than the Young Justice team. Namely, Dr. Fate and Klarion the Witch Boy. (Disappointingly, the Madame Xanadu that also appears in the opening segment turns out not to be the real one.) These oddball magical nemeses provide a change of pace to the more common superhero narratives, and though they somewhat take over for the series regulars, they do provide a platform for exploring Kid Flash's dedication to science and the schism between (arguably) logic-based superhero tropes and the mystic arts.

All in all, Young Justice - Season One, Volume Two proves that the series has legs. The stories continue to impress, as does the animation, which is uniformly slick and boasts a clean, consistent style. I am a little surprised by how much these shows take place in the dark, as the Justice League mainly uses its young protégés as undercover agents, but even that serves to separate Young Justice from other lighter DC animated shows like Teen Titans Go or Brave and the Bold. I'd still prefer more substantial DVD releases, but am enjoying catching the series in this serialized format nonetheless. I'm definitely going to stick around for Volume Three and beyond. 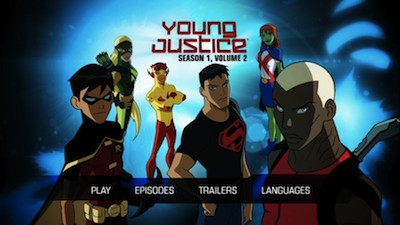 Video:
Young Justice - Season One, Volume Two is basically on par with the first volume, in that it's got a solid presentation that does the job even if it isn't perfect or particularly dazzling. Colors look good, and the image stays clear even when the storyline demands that the action occur in the shadows. Some jagged lines do show up during the viewing, but overall, it's an adequate transfer of a contemporary cartoon.

Sound:
As with the video, the audio does the job though it isn't really going to knock anyone off their feet. There is some decent balance in the Dolby Surround mix, with well-handled sound effects and no distortion.

FINAL THOUGHTS:
Young Justice - Season One, Volume Two is Recommended. If you've already sampled this cartoon show, you know what you're getting and this selection of four episodes delivers more of the same, building on the narrative foundation lain in the initial collection. If you haven't seen it and like traditional crimefighter comics and superhero action, you should give it a try. You can jump in here or start from the beginning; either way, it's worth it just for a fun night of uncomplicated adventure. 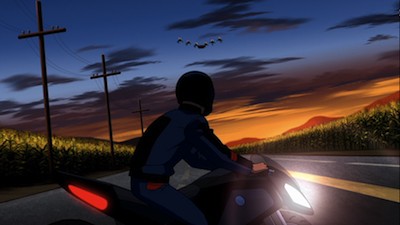