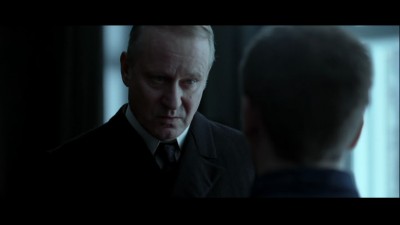 King of Devil's Island is set in the brutal juvenile prison camp on Bastøy Island in 1915. The movie begins with the arrival of two new inmates: the bruiser Erling (Benjamin Helstad) and the timid Ivar (Magnus Langlete). Ivar admits that he stole from the church collection, and that's why he was sent to Bastøy. Erling doesn't confirm nor deny, but it's rumored that he killed a man. Both boys will be responsible for altering the mood of the reform school, setting off a narrative that slowly comes to a boil, culminating in dangerous violence and tragic consequences.

Based on a true story, King of Devil's Island is the latest from director Marius Holst (Dragonfly). He cast Stellan Skarsgård (The Avengers) as the head of the school, a man who talks about compassion slightly more than he practices it. The governor relies on a six-year-resident named Olav (Trond Nilssen) to keep order amongst his barracks, and he hopes Olav can show Erling how to get along. The boys are reduced to numbers while on the island. Olav is C1, while Erling is C19. The two become begrudging friends, even as Erling's bad behavior jeopardizes Olav's upcoming release. The two eventually bond over their disgust for the sexual abuse Ivar suffers at the hands of one of the schoolmasters. How the man at the top ends up dealing with this accusation sets off the inevitable tumbledown of events, landing Bastøy Island in chaos.

Holst's movie is brutal in its depiction of cruelty, but it is never cruel itself. The injustice in the reform school sickens the audience as much as it does the incarcerated kids, many of whom we get the sense don't deserve the harsh punishment meted out to them. The predatory warden (Kristoffer Joner) is an authentic villain. He's racist, sadistic, and eventually too cagey for his own good. You'll likely find yourself rooting for bad things to happen to him despite your better judgment.

Skarsgård turns in a predictably excellent performance, portraying the school's governor as thoughtful, strategic, and also misguided. He commands true authority through posture and measured speaking, making it clear why he runs the school and also adding to the magnitude of the shift when he looses his grip on it. More impressive, however, are the boys who form the core of the cast. Both Trond Nilssen and Benjamin Helstad are excellent. They have a naturalistic style that serves their inner conflicts well. Olav is a well-meaning kid who has to learn to toughen up, while Erling is a hothead who needs to learn to choose his battles. Throughout King of Devil's Island, the boys help each other out, eventually taking the traits they need to survive from one another. 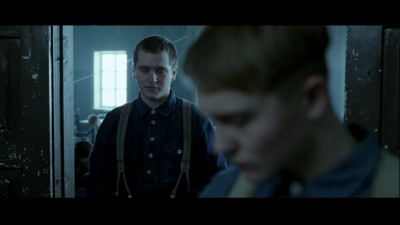 The environment of the island is as much of a character as any of the humans, and director of photography John Andreas Andersen (Headhunters) captures the damp and the gray to great effect. Most of his shots with the actors feature them in close proximity, often packed within the frame, alternating in focus. He only goes wide to show the vast desolation of Bastøy--the crashing waves, the endless snow and trees. Just watching The King of Devil's Island will make you shiver from the cold. Likewise, Johan Söderqvist (In a Better World) has composed dark and dramatic music that underscores the tension well, never going too far over the top, but staying at just the right level to enhance rather than overpower.

Some might find the bleakness of King's of Devil's Island a little too relentless. There is not much that happens in this story that could be classified as "positive," and yet it also isn't overly dramatized so as to be cartoonish. Holst stays true to the material, meaning that when he indulges in a little poetry for the film's conclusion, it feels like it's been earned. 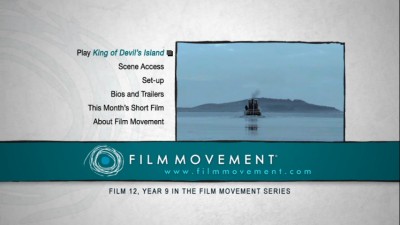 Video:
Film Movement presents the film at a 16:9 widescreen ratio. Colors look good, with particularly nice blacks, emphasizing the chilly desolation that permeates the story. Resolution is a little weak, however, with evident jagged lines many times throughout the film. Luckily, this is not a constant.

Sound:
The original Norwegian soundtrack is presented in surround sound, with some good side speaker effects that create a realistic aural atmosphere. The optional English subtitles are well written and easy to read.

Extras:
King of Devil's Island comes with text-based cast and filmmaker bios and a trailer for the film, both on the DVD. 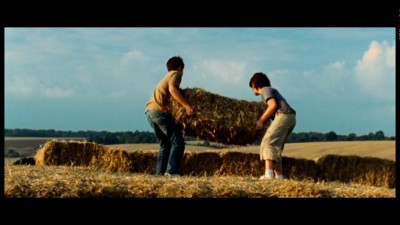 As with all of Film Movement's discs, there is also a secondary short subject. This time it's the 2009 short film Bale from the UK. Written and directed by Alistair MacKay, it's a slight, yet effective story of what happens when sibling bullying goes too far. The climax is emotionally sound, which makes it a little disappointing when the final scene adds an unnecessary twist.

FINAL THOUGHTS:
Recommended. The Norwegian film King of Devil's Island is a solid historical drama. Set on an island reform school in the early 20th Century, it's a dark portrait of a brutal system and the boys who find friendship inside it. Led by two fine young actors and one veteran of international cinema, King of Devil's Island sustains a bleak mood that weighs heavy throughout, leading to a surprisingly satisfying conclusion. 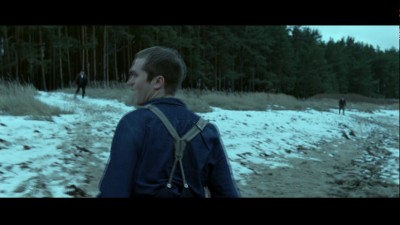