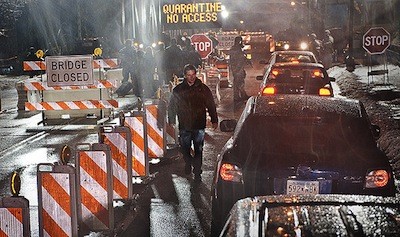 If you want to be the most popular person in your town, go to a screening of Contagion, and as you leave the theatre, breathe really heavy on the neck of the person in front of you on the way out. Half the crowd will think you're hilarious, half will hate you. That kind of 50/50 notoriety, that's the way to true fame.

Personally, I'd kind of hate you and I'd kind of applaud you at the same time. Contagion, the latest from wunderkind director Steven Soderbergh, really got under my skin, and though I'd be pretty ooged out, I like such audacity. It's also why I like Soderbergh. The man has testacles the size of old-school movie reels. Which anyone who has kept up with his career well knows. I mean, this is the dude who made a two-part biopic about Che Guevara (Che), a loopy homage to Franz Kafka (Kafka), and an even loopier homage to his own fractured creative instincts (Schizopolis). These are the choices he makes rather than succumb to Ocean's 14 (though, hey, let's not rule it out).

Contagion is a lithe procedural that follows a deadly virus from patient zero through to epidemic and containment and...well, I guess that would be a spoiler, and spoilers reproduce on the internet like spit from the sneeze of a monkey. (Information Outbreak!) The whole chain of germs starts with Gwyneth Paltrow in Hong Kong and spreads out from there--London, Japan, Chicago. People start dropping dead, more get sick. Matt Damon was married to Gwyneth and he is immune, but he's losing his mind, scared his daughter will die, too. Laurence Fishburne is a big wheel at the Center for Disease Control, and he dispatches Kate Winslet to Gwyneth's home to follow up on all leads while the World Health Organization sends Marion Cotillard to Hong Kong to search for the origin of the deadly biology. Meanwhile, Jude Law is a conspiracy-minded blogger in San Francisco convinced the cure already exists and that interested parties are sitting on it in order to best capitalize on the tragedy. 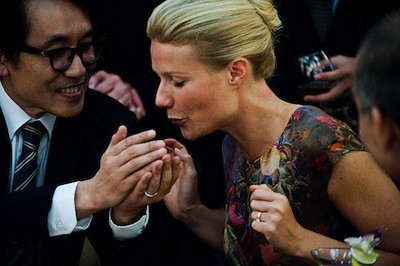 All of these actors play characters with actual names, but trust me, you'll remember them easier by their civilian identities. Contagion is a fast-moving science thriller with a huge cast. (Folks you've maybe heard of not named so far: Elliott Gould, Demetri Martin, John Hawkes, Enrico Colantoni, Bryan Cranston.) The script by Scott Z. Burns (The Informant!) covers a lot of ground very quickly, spanning the globe while mainly taking place between Thanksgiving and Christmas. In certain corners, government people rush to identify the source of the virus and discover a cure, and in others, characters go on about their lives trying to cope with this public crisis. Despite a distinct lack of hysterics or melodrama, Burns and Soderbergh still find time for the human moments between all the jargon. Damon provides a real emotional center, but there are also nice moments between Fishburne and Winslet, and Cotillard's subplot takes some unexpected turns.

In fact, there is a lot that is unexpected about Contagion. It's one of those movies that has a trailer that inspires a knee-jerk "It's showing me everything" reaction from the less-adventurous viewers amongst us. Let me state it as plainly as possible: you have not seen it all, you do not know everywhere Contagion is going. The people making the movie are smarter than you and I, they do things we could never dream of. I will warn you, however, Contagion is not as zippy as the preview would have you believe. It is thoroughly enthralling and unnerving, but it's not the nail-biter they are selling it as. See it anyway. Just make sure you're awake and ready to pay attention.

As is to be suspected, Soderbergh not only directed, but he acts as his own cinematographer. One cannot discount the filmmaker's role as a pioneer in digital camera work, and once again, his employment of the Red One and Red Epic cameras allows him to shoot Contagion with a visceral immediacy. Soderbergh moves from scene to scene, relying on editor Stephen Mirrione (who also cut Traffic) to help him keep it all straight. There are elements of political and board-room movies, and there are also more typical suspense sequences and even touches of family drama. Much of the production is spartan, Soderbergh doesn't overdress his sets. He also keeps the music subtle, using Cliff Martinez's futuristic, alienating electronic squiggles to set the queasiness of the mood.

There isn't much to tear apart here. Contagion is effective and efficient. It does what it sets out to do. It's a movie where a problem is posed, and then people put their heads together and work to fix it. Every exploitable narrative tributary is explored, examining all possible actions and reactions from the ground up. It's damn fine filmmaking, reminiscent of the best stuff of the 1970s, like Alan J. Pakula and Sidney Lumet, but also of the here and now, employing modern technology to its best effect. Steven Soderbergh has teased that he's ready to retire, but thank goodness that looks like it's little more than public grousing. Filmmaking is in your blood, man. You are the disease, we don't want any cure!

And yes, that is me breathing down your neck. Why do you ask? 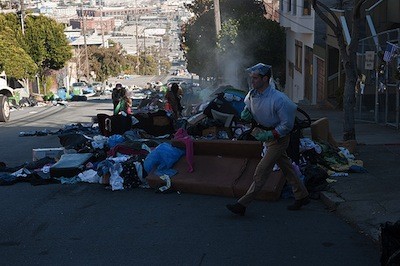