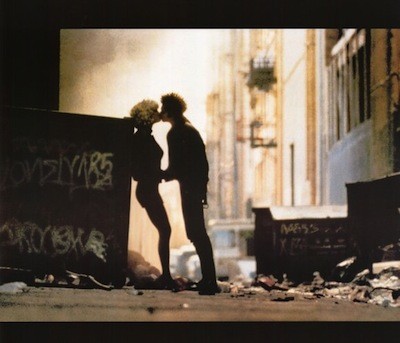 I don't know if it was coincidence or some kind of neighborly retaliation, but while I was watching Sid and Nancy today, the hippy in the apartment next door started blasting the Eagles' "Desperado" during one of the Sex Pistols concert scenes. Though he and I are of different generations, it appears the division between 1970s sissy rock and old school punk will never close. Were my life a movie, I'd have started shouting obscenities and banging on the wall. Instead, I just waited it out. I had 111 minutes of Chloe Webb's nasal yowl at my disposal. Don Henley could suck it.


I imagine the Sex Pistols still remain a rite of passage for most rebellious teens. I don't know if I had seen Alex Cox's biopic of the band's iconic bass player before or after I bought my copy of Never Mind the Bollocks on cassette, but it was around the same time, at the very least. My family had left for the weekend, I unpeeled the plastic wrapping, and I blasted it through all two stories of our house while I dyed my hair black. I was in big trouble for the hair--if for no other reason that I got black dye all over the place, including the kitchen curtains--but the Sex Pistols was a clandestine revolt successfully enacted. My father and stepmother would most certainly not have approved.


They wouldn't have approved of Sid and Nancy, either. I'd wager viewing the 1986 film has become as essential as the Pistols' one complete album. For those of us who missed the reality, here is a simulacrum. Do you want to see what London looked like in 1978, and how a vintage punk rock gig might have come off? Sure, there are documentaries and bootlegs. There is also Sid and Nancy.


As the mythology goes, there was barely a month between Sid Vicious (played by a young, feral Gary Oldman) joining the Sex Pistols and his meeting Nancy Spungen (Chloe Webb, who would go on to star in the TV series China Beach). Sid was a scenester who had befriended Pistols singer Johnny Rotten (a.k.a. John Lydon, and played by Andrew Schofield) after the group's first bassist had departed. As portrayed in the script by Alex Cox (Walker) and Abbe Wool (Roadside Prophets), Sid catered to John's most adolescent of tendencies. They drank and farted and made a public nuisance of themselves. For Sid, however, the music was always secondary to the lifestyle, and the dangerous American groupie offered Sid a chance to increase his image. She was already a junkie when they met, and he seized on her habit and made it his own.


The events that follow are tragic and all too familiar. Bonded by their addictions, the couple became inseparable. Sid's devotion to Nancy was equal to his devotion to heroin. Indeed, one depended on the other, to the point where the band had to try to remove both from his life. They were successful in leaving Nancy behind in England during an infamous U.S. tour, but getting Sid to stop the boozing and drugging proved more difficult. The Pistols broke up before the jaunt was complete, and Sid and Nancy eventually ended up in New York, where they shot junk and made each other miserable. Within a year, Sid had murdered his lover and then died himself, suffering an overdose not long after.


Sid and Nancy benefits from its narrow focus. Unlike most cinematic biographies, this film doesn't attempt to smash a whole life into two hours. Instead, Cox encapsulates two years, letting this doomed relationship serve as his narrative arc. He isn't concerned with trite causalities or psychoanalyzing his subjects. These were self-destructive individuals who found some messed-up form of love via their mutual death-wish posturing. Sid and Nancy is a seedy portrayal of an unglamorous lifestyle. Cinematographer Roger Deakins (True Grit, Revolutionary Road) embraces the grime and squalor of the scene, shooting in low light and with a minimum of fuss. While there are some remarkable shots in the film, particularly ones using authentic landscapes as the backdrop (Sid and Nancy talking for the first time under a graffiti-covered wall; the final images of Sid walking along the Hudson River), it never feels like Deakins and Cox are trying to clean up the material. There is zero romance in Sid and Nancy; on the contrary, despite its status as a cult fave amongst latter generation punks or its mislabeling as a love story (albeit a heartbreaking one), it demythologizes Sid Vicious. As seen here, he is an unremarkable personality, a poor musician, and one monumental screw-up--a portrayal that is far from dishonest.


Still, there's a reason that Sid Vicious' face still sells posters and T-shirts to disaffected youth worldwide. As Malcolm McClaren, the manager of the Sex Pistols (and played with an appropriately calculated sleaze by David Hayman in the movie), is known to have proclaimed, if Lydon was the voice of the punk movement, Vicious embodied its attitude. In capturing this, Cox does the best thing any biographical filmmaker can do: he cast the lead roles perfectly. Gary Oldman and Chloe Webb are a ferocious acting duo. Oldman gets Vicious' unique combination of swagger and cluelessness. Both performances appear to be spontaneous and are lacking in unnecessary vanity. Oldman and Webb are nearly unrecognizable on screen, and it's a credit to their abilities that Sid and Nancy didn't go on to define their acting personas.


Twenty-six years on from its original release, Sid and Nancy has aged well, though it's not without its flaws. Cox perhaps wallows too long in the addiction, drawing out his subjects' time in New York far longer than necessary for viewers to get the point. The latter half of Sid and Nancy is unrelentingly bleak, to the extent that it grows tedious. Cox occasionally pierces the darkness with surreal touches, some of which work (Sid and Nancy making out in an alley while trash rains down around them) and some that don't (speeding up the film when Sid scares the mean little kids away). Of course, this goes a long way to keeping Sid and Nancy from being a promotional film for heroin, which is important to the truth of the story but renders Sid and Nancy a little flat at the same time. There isn't any buried nuance here, no surprises to be discovered on repeat viewings. Like Sid's music, only a couple of chords are required to build the melody; at the same time, that simplicity allows for a direct impact more complicated dramas regularly fail to achieve.


This "Collector's Edition" release of Sid and Nancy brings the film to Blu-Ray at a 1.85:1 widescreen aspect ratio. The 1080p transfer, AVC encoded at 38 MBPS, is well done, achieving a strong level of detail without erasing the film's gray and hazy feel. The sweat and blood that make up an essential part of Gary Oldman's wardrobe glistens even as sickness eventually dulls his pallor. The dirt and the chipping paint of the couple's decaying surroundings have as much subtle power as the clouds and distant sunlight in some of the outdoor scenes, with the drabness of the 1970s appropriately evident in both. Sid by the river, the Pistols riding on the Thames--these are moments when Roger Deakins really gets to show his ability to photograph a found location, and they look fabulous on this disc. That said, the transfer isn't a total knockout, it can seem a little too soft from time to time--but then, that fits with the filmmakers' intent, as well.


The original soundtrack has been remixed in 5.1 DTS-HD Master Audio. It's got some nice oomph to it, particularly in the concert scenes. The music rumbles and explodes and there is a sense of the power that is often evident in a live club scenario. Dialogue is mostly presented front and center, and there isn't a lot in terms of ambient noise that works the back speakers or even jumping from side to side, but these things are also not notable in their absence.


There is an optional closed-captioning track for English speakers.


While the extensive extras from the out-of-print Criterion edition (released back in 1998) are still M.I.A., the BD for Sid and Nancy does have the film's theatrical trailer, as well as two fifteen-minute featurettes, "For the Love of Punk" and "Junk Love." Both feature outside commentators discussing the movie, the music, and the real life Sid and Nancy attempts to depict.


Recommended. Alex Cox's 1986 biopic Sid and Nancy captures the brief two-year relationship between musician Sid Vicious and his girlfriend Nancy Spungen, chronicling the dissolution of the Sex Pistols and the pair eventually wasting their lives away on heroin. Sid and Nancy is a dark look at fame and addiction, invigorated by outstanding performances from Gary Oldman and Chloe Webb. Though it perhaps goes on a little too long, the film's extended portrayal of its subjects' self-destructive behavior serves to underscore just how unromantic their lifestyle turned out to be. Roger Deakins' photography looks exceptional on Blu-Ray, making this the essential way to experience Sid and Nancy, whether you're a new punk exploring the history for the first time or an old fart like me revisiting a movie you remember from way back when. Bonus points: no Eagles.