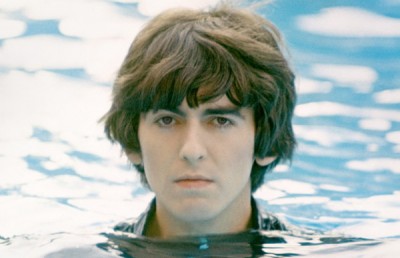 Martin Scorsese's new two-part documentary George Harrison: Living in the Material World is something of a cinematic cousin to his brilliant 2005 doc No Direction Home: Bob Dylan; though it covers more material (Scorsese tackles the entirety of Harrison's life, whereas the Dylan film only covered the first few years of his career), it does so at a comparable length and in a similar style, and with similarly marvelous results. In both cases, Scorsese is taking on an beloved subject, one about whom reams have been written and miles of film shot, yet the master filmmaker finds new ways to approach familiar material, and sly methods of humanizing the Cultural Icons at his pictures' centers.

In Living in the Material World, he is well aware that, for just over half of his running time, he is dealing with the most famous rock group of all time, so he assumes we don't require an on-screen ID for Paul McCartney, nor do we need to be told who this "John" is he's speaking of, and what band they're in. Their story has been told so many times, in documentaries and fictionalized accounts, that Scorsese is challenged to find an interesting way to tell it; he rises to the occasion, admirably. Rather than the customary clips of screaming fans and Hard Day's Night chases to illustrate the frenzy of Beatlemania, he uses gritty, candid stills, accompanied by a voice-over of a letter home (the readings are by Harrison's son Dhani). The break-up of the group is signaled early on, by a jump of several years just as their story is getting underway; for a brief moment, we think the film is going to skip the group altogether. His awakening to Eastern music and meditation is shown via a series of fisheye stills, accompanied by his song "The Inner Light."

That's just one example of how the film perfectly melds music and image; Scorsese's The Last Waltz famously begins with the instruction "This film should be played loud," a directive that should be repurposed here. Particularly in a theatrical setting, one is allowed to drink in the full density and richness of these songs, and the picture indulges that, while often undercutting our familiarity by using alternate takes, studio chatter, acoustic demos, and editor David Tedeschi's favorite trick of hard-cutting out and in to the music. (He also cut not only the Dylan documentary, but Shine A Light, Public Speaking, and Scorsese's episode of his mini-series The Blues.)

And the footage is remarkable and surprising. Even Beatles fans who are well-acquainted with previous documentary treatments will find unfamiliar stuff here: home movies of group vacations, 8mm clips from their pre-fame days, priceless tape of George laughing and singing along with an old TV performance, Ringo's home video of the surviving trio meeting up to look at the galleys of the Beatles Anthology book. (That project's accompanying documentary series provides much of Harrison's own archival interview material.) The film occasionally goes on detours that seem off-topic (there's a bit too much about Astrid and Stu for a film ostensibly about George), but those side trips often result in wickedly entertaining moments, like a hilarious clip of a TV commentator blathering on and on about the fervor of female fans (the wordless cutaways of a dumbstruck Mick Jagger, next to him on the panel, are priceless).

Those close to Harrison are interviewed, at length. McCartney is warm, honest, and funny (he calls their shared school Dickensian: "In fact, Dickens had taught there. So it was very Dickensian"). Eric Clapton's description of the love triangle between him, George, and George's first wife Pattie is riveting. Ringo is, well, Ringo. (That's meant as a compliment). And his widow Olivia is wonderfully witty, candid, and insightful, particularly in her heart-tugging explanation of his outlook on living his life to its fullest ("If someone said, 'You can everything in five lifetimes, or a real intense one,' he would've said, 'Give me the one, I'm not coming back here").

George Harrison: Living in the Material World tells a great many stories: how George developed his musical persona, how he made his musical masterpiece (the three-record All Things Must Pass), how he became a film producer almost by accident, how he was nearly killed in a weird, horrible home invasion. But most admirably, it is the story of a man on a life-long search for answers; it delves deep into the substance of his spiritual journey, and the struggle of maintaining it. Because it takes that element of his life so seriously, and tracks it in such painstaking detail, we feel real emotion and something akin to genuine enlightenment when his story reaches its end; we've gotten attached to this man, and feel as though we know something of him after spending this much time getting a handle on who he was. That is the value of a film this long--set adrift over three and a half hours, we can observe and regard a full and complex life, and feel as though we understand it a touch better afterwards. This is a masterful film.