Paramount // Unrated // December 13, 2011
List Price: $36.99 [Buy now and save at Amazon]
Review by Stuart Galbraith IV | posted December 26, 2011 | E-mail the Author
Barely a month after reviewing Gunsmoke - The Fifth Season, Volume 1, CBS-Paramount's Volume 2 set rolls into Dodge. I like the fact that these two halves are being released so close to one another. Hopefully that's also a sign that the sixth season may arrive sooner than next November. In any case, this three disc set offers yet more terrific episodes of Gunsmoke, made when the series was still at the top of its game.

As stated in earlier reviews, these taut, half-hour, black and white shows from the late 1950s and early '60s are generally much superior to the one-hour (and later still) full color ones. They offer compact, intriguing little scripts that play like short stories, the acting is usually excellent, and the direction and production values are comparable to movie Westerns of the period. As drama, the best Gunsmokes compare favorably to the best half-hour television dramas running concurrently, in any genre. If you're a fan of, say, the original Twilight Zone, you may be quite surprised by just how good Gunsmoke frequently is.

The fifth season of Gunsmoke was the first credited as an "Arness and Company" production. Star James Arness also gets a credit as Associate Producer, and it seems these were more than just titles and sources of additional income. During this season Arness, who maintained a reputation as an extremely generous man particularly in terms of looking after his casts and crews, may have been behind a general move to focus more episodes away from him and toward supporting players Amanda Blake, Dennis Weaver, and Milburn Stone. Their characters have much more to do and are enriched considerably in the process. Even bit players like Clem Fuller (as Long Branch Saloon bartender Clem) enjoy a choice scene here and there.

Never having watched Gunsmoke when it was in its last throes in the late-'60 and '70s, or in reruns, catching it all for the first time on DVD has been a minor revelation. I had no idea that these earlier, black & white, half-hour shows were so good. From the very first season they're way above average and, so far, continue only to improve. The bad news is after all these reviews it's darn near impossible coming up with something new to say.

This latest volume includes the final 19 episodes of the 1959-60 season, when as the Number 1 show in the Nielsen Ratings, Gunsmoke had a 40.3 rating and a 65 share, numbers unimaginable today. (For instance, the Number 1 show during 2005-06 was American Idol, which had a 17.7 rating and a 27 share.) The 19 episodes are spread over three single-sided, dual-layered DVDs, and as always look great. No extras. 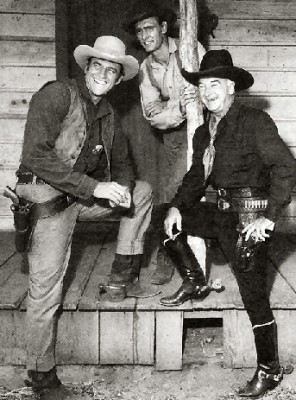 The Gunsmoke that might have been: Matt Dillon meets Hopalong Cassidy.

Many episodes fall into one of these categories. In "Hinka Do," a tough, no-nonsense Annie Oakley type, Mamie (Nina Varela, excellent) suddenly assumes ownership of a local saloon, while its milquetoast owner has vanished. Who is she? Did she murder the original owner and hide his body? Matt and Chester are on the case of this baffling, ultimately funny mystery.

Even better are episodes like "Doc Judge," an excellent showcase for Weaver, and which broadens the relationship between Doc and Chester. A psychotic stranger (Barry Atwater, impressively insane) comes gunning for Doc, the gunman mistakenly convinced Doc is the judge that sent him up years before. Doc refuses to take the man's threats seriously but Chester knows better, and with Matt out of town, he insists on protecting his cantankerous old friend.

"Kitty's Killing" is equally fine. She stands between a young family and an embittered, eccentric father (Abraham Sofaer) unable to contain a driving urge to murder his own son-in-law. This and "Doc Judge" feature (by television standards) unusually realistic killings, committed by series regulars other than Matt. Their traumatized reactions at having killed are also uncommonly authentic.

Indeed, Gunsmoke is impressively grim much of the time, especially when compared to safer, less ambitious and generally lighter shows of the color/one-hour years, or of many contemporaneous TV Westerns from 1959-60. "Jailbait Janet," for instance, begins with a brutal train robbery in which the baggage car man (Jon Lormer) is shot and later dies (again, realistically). Matt tracks the robbers down only to discover they're a homesteader and his two adult children, whose struggling farm was essentially destroyed by the uncaring railroad company, which simply ignored their claims. Nevertheless, Matt must bring the father (John Larch) to justice anyway, and it all ends tragically. "The Deserter" is similarly bleak, about a family destroyed by one wayward son's greed. By the end everyone is either dead, seriously injured (including Chester in a shocking flash of violence) or tainted from having killed somebody else.

Directors giving Gunsmoke its movie-worthy appearance include Andrew V. McLaglen, Arthur Hiller, and Jesse Hibbs, mainly, but workhorse Jean Yarbrough helms one show. Writers John Meston and Les Crutchfield do the heavy lifting, but a number of these were adaptations of Marian Clark's original radio plays.

Gunsmoke looks exceptionally good on DVD. Shows are a bit overly grainy (especially during the opening titles, reworked slightly for syndication) but otherwise they're very sharp, very clean. The 19 black-and-white episodes are spread over three discs, with a total running time of about eight hours and 16 minutes. The Dolby Digital mono (English only) is clean and clear, and the show is closed-captioned. The packaging allows viewers to read the episode descriptions inside the snap case without having to remove any of the discs.

Another set of musts for Western fans, especially for those who recognize that the half-hour, black-and-white Gunsmokes actually hold up better than the more recent color ones. Taut and movie-like, Gunsmoke is classic American television and Highly Recommended.