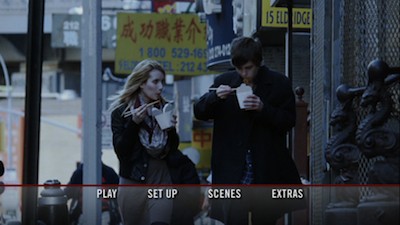 There's a certain chill that grips the aging film critic when he realizes that the actors starring in the latest high school drama up for review were actually born after he personally graduated high school. (Emma Roberts a year later, Freddie Highmore two.) This adds an increased sting to the interior twinge when he hears the male lead say things like, "I'm a misanthrope. That's a fact, not a choice." Oh, god, no, I was that kid.

It's either to the credit of first-time writer/director Gavin Wiesen's ear for dialogue or the predictability of certain teenage experiences that The Art of Getting By is so spot-on in its portrayal of a creative, morbid, romantic adolescent doofus. Freddie Highmore, the little boy from Finding Neverland, stars in the film as George Zinavoy, the kid from school who wears a dark overcoat and sits alone at lunch reading Camus. George is smart and more than a little talented, but rather than focusing on his education or honing his drawing skills, he puts his attention into glib excuses and doodling. He's not a bad kid, he's just not engaged. Most of his report cards probably say, "George needs to apply himself."

George puts the same kind of energy into his personal relationships as he does everything else. He dismisses his mother (Rita Wilson), loathes his condescending stepfather (Sam Robards), and thinks it's funny to call his principal (Blair Underwood) by his first name. It isn't until he impulsively covers for a girl he doesn't know when she's caught smoking that we even see him interact with his peers. Sally (Emma Roberts, Lymelife, It's Kind of a Funny Story) is pretty and slightly older and easily more experienced than George. She and her friends have money, and they like to party and apparently have good fake IDs, because they drink in NY bars without much trouble. Sally's sweet to George and they develop a genuine bond. He, of course, falls in love with her, and she either fails to notice or doesn't want to rock the boat. 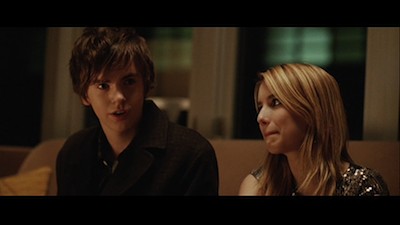 This is all fairly common stuff for Young Adult stories, regardless of the medium, but The Art of Getting By gets away with it because the film is so well told and expertly performed, the familiarity of the scenario ceases to matter. Highmore is glib but vulnerable, and Roberts avoids any obvious choices that would make Sally appear heartless. She's selfish, sure, and willfully blind at times, but there are hints to the troubles in her past that maybe make her a little deflective. Likewise, parents and teachers are not presented as monsters, but instead are shown as people who genuinely care, despite their own propensity to screw up. (Elizabeth Reaser from the Twilight movies is memorable as Sally's promiscuous mother, and it was a surprise to see Clueless-star Alicia Silverstone pop up as George's English teacher.)

The predictability of The Art of Getting By only becomes the film's downfall in the final act. After a gutwrenching split between Sally and George, some added betrayals and George's own mistakes converge to push him to get his crap together. The personal stuff is disappointingly obvious (the stepfather hiding his own failures, the older friend making a move on Sally), and the school stuff is a little hard to swallow. Wiesen concocts a way for George to save his floundering grades and learn to express himself that builds to a rousing finish, but it feels a little bit like chickening out. Sure, it may be what audiences want to have happen, but it's not really satisfying. The final scene in particular flushes any chance of maintaining The Art of Getting By's emotional authenticity. Sure, that conclusion would have been my teenage dream back when I was in George's overcoat, but maybe had films like this one told me the truth, I'd have dropped such delusions much sooner. 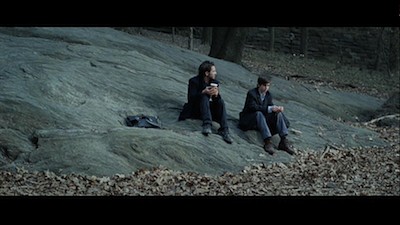 Video/Sound:
Fox did not provide a finished product for review. Instead, we were sent The Art of Getting By as a watermarked test disc. The widescreen transfer on the disc reflects this, with hazy edges and splotchy colors that one hopes is only reflective of the advance copy and not of the final retail version. The audio is mixed in 5.1 Dolby and sounds very good, though it lacks any ambience, which is a pity. The straight-ahead mix is good for a dialogue-driven movie like this, but there was still ample opportunity to use the full range of speakers to capture the sounds of the real New York locations.

There is also a "descriptive audio" option in 5.1, for those with impaired vision, as well as closed captioning for the hard of hearing. French and Spanish subtitles are available, as well.

Extras:
The DVD edition carries a couple of extras (the Blu-Ray apparently has a couple more). Two very short featurettes, "New York Slice of Life" and "On Young Love," both clock in under three minutes and barely touch on their subjects. Not surprisingly, the full-length commentary with Wiesen goes deeper into the film's narrative drive and its basis in the author's real life.

The theatrical trailer is also included

FINAL THOUGHTS:
Recommended. There is a lot that is familiar about The Art of Getting By, but Gavin Wiesen's directorial debut is told with such an understated simplicity, it's hard not to identify with or appreciate the honesty in its familiar tropes. Its young stars, Freddie Highmore and Emma Roberts, are particularly strong as a pair of friends that have trouble finding the obvious romantic groove that binds them, and though the plot is straight out of a million Young Adult novels or coming-of-age movies, there's a certain comfort to be found in such familiar tropes. I wish the ending had stayed true to the harder choices made earlier in the movie, but then, if I were still in high school, it would have delivered exactly what I wanted, so I almost feel bad applying my grown-up logic to what is otherwise a surprisingly authentic adolescent expression. 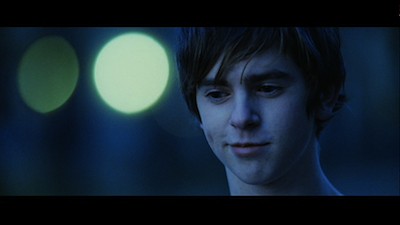