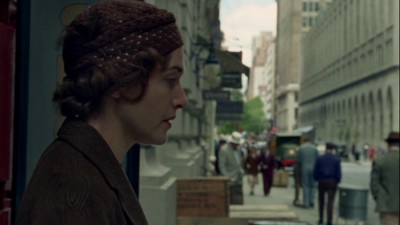 Please Note: The screen captures used here are taken from the accompanying DVD version of the miniseries, not the Blu-ray edition under review.

Leave it to the great Todd Haynes (who made [Safe], Velvet Goldmine, and Far from Heaven, and who I'll admit up front is one of my personal most admired and beloved contemporary filmmakers) to further that blurring of the line dividing great cinema from the small screen, a revolution that's been in full swing since The Sopranos hit our cable boxes. Haynes brought much of his long-running big-screen production/creative team with him to the making of this year's five-part, 5-1/2-hour HBO miniseries Mildred Pierce, and from the moment the titles come up at the beginning of the first episode, over an eye-arresting Art Deco graphic background, accompanied by Carter Burwell's elegant theme music, and announcing Kate Winslet in the title role, it feels like just exactly "a miniseries event" as advertised by HBO with, as it turns out, not at all too much hyperbole, and possibly too little; it really wouldn't be going to far to call it "the miniseries event." 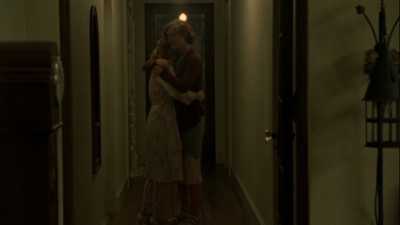 First dissociations first: Whether you love (as I do), are indifferent toward, or have never even seen Michael Curtiz's (Casablanca) famous, noir-ish 1945 version of James M. Cain's hardboiled novel starring Joan Crawford as Mildred, this latest rendition is an extremely different creature, and there is ample room in the cinematic universe to accommodate both Curtiz's golden-age-of-Warner-Brothers creation and Haynes's much more faithful (as far as that goes) and expansive adaptation, a teleplay collaboration with Jon Raymond (best known for cowriting Kelly Reichardt's films Wendy and Lucy and Meek's Cutoff). Cain's novel, though compact, is dense with event, character development, and an epic arc; Haynes and Raymond need the length of a miniseries to fully capture its essence and bring out all the resonances they find in it, both at the level of the characters' convoluted-family-romance relationships with each other and on the plane of the Depression-era social, economic, and political backdrop that the story plays out against and, in many ways, from whence it springs. Whether the characters ultimately make or are made by their world is a question that hangs, unanswered, over the entire affair; one of Haynes and Raymond's many adroit storytelling moves is their way of keeping us both emotionally involved and critically observant, always finding just the right distance, just the right point where we can clearly see both the characters as unique individuals and the ways in which their behaviors are motivated by, and their personalities dependent upon, their time and place.) 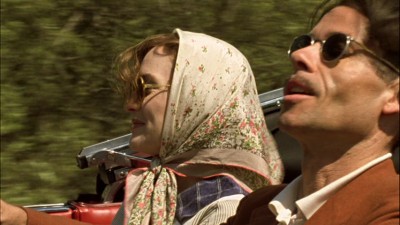 The first, defining moment in Cain's story--the final dissolution, early in the impoverished 1930s, of the marriage between restless, energetic, ambitious Glendale, California housewife Mildred Pierce (Kate Winslet) and her unemployed husband and father of her two daughters, Bert (Brian F. O'Byrne)--certainly has much to do with the inescapable personal impact of the Depression, as does the immediate, practical post-divorce need on Mildred's part to seek the advice and temporary sexual comfort of Wally Burgan (James Legros), Bert's ex-partner in the failed real-estate development tract in which the Pierces themselves reside. She also brings her troubles to the shoulder and ear of her empathetic but tough best friend, Lucy (Melissa Leo, Treme, The Fighter), who informs Mildred that she must swallow her pride and find a job. That's easier said than done, and Mildred painfully abandons her hope for half-respectable clerical work to take a job as a waitress in a diner, which she considers well beneath her middle-class station, in large part because her eldest daughter, Veda (Morgan Turner, in a precociously intelligent performance), who has an influence on Mildred that starts out unduly strong and becomes overpowering, looks down on waitresses, servants, or anyone who has to work with their hands for a living. 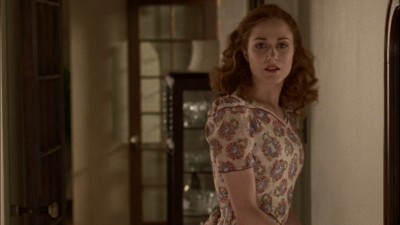 It is, as we come to see very vividly, what she maternally considers Veda's infinite potential and extraordinariness that keeps Mildred going as she works her way up from clumsy waitress to entrepreneurial supplier of homemade pies to her employer to, finally, the owner of her own successful restaurant, then chain of restaurants. It is Mildred's increasingly oppressive, boundless and boundary-less love for Veda (later played as a young woman by Evan Rachel Wood) that she clings to ever tighter as her exponentially growing success is tempered by numerous reversals in her business, family, and romantic fortunes, including a death in the family and her sexual liberation and financial exploitation at the agile and grabby hands of fallen, penniless blueblood Monty Beragon (a devilishly handsome Guy Pearce, L.A. Confidential). Mildred creates a monster with her tireless support, in virtually any way imaginable, of the disdainful, manipulative Veda; that monster is, however, a projection of the hierarchical (and, for her, ultimately self-destructive) ladder-climbing values Mildred has apparently absorbed all the way down into her subconscious. She, the mother, might work, struggle, and "lower herself" (by the internalized estimation of the society she must play a part in), but it's all so that the daughter will never have to even come close to experiencing lack or sacrifice of any kind and can instead focus on becoming a member of the upper crust, a paragon of high culture unsullied by menial work. That Veda does this by becoming a powerhouse opera star is wonderfully appropriate and employed to beautiful narrative, visual, and aural effect as Haynes and Raymond take Mildred and Veda's unhealthily symbiotic, doomed-to-tragedy relationship to operatic heights of its own. The cast is excellent all around, but it is the playing-out of this central relationship that creates for Winslet what could be the role of her brilliant career; she is flat-out superb, perfectly cast in and wholly committed to her role. Evan Rachel Wood soars, too; just consider her disparate but always very fine work here alongside what she brought to The Wrestler and Whatever Works if you want to stand convinced that she is not just a charismatic and beautiful star but an actor capable of virtually anything. (It would be remiss not to also pay tribute to Carter Burwell's tenderly melodic score, which plays its own vital supporting role in setting the tone throughout; it could be his very best work to date, easily standing with his long run of unforgettable scores, e.g., Fargo and Miller's Crossing, for the Coen Brothers.) 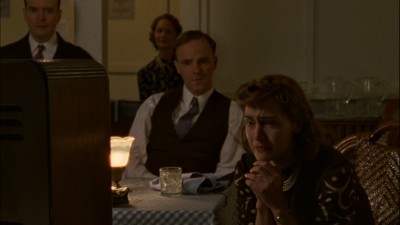 Working once again with cinematographer Ed Lachman (The Virgin Suicides, Haynes's I'm Not There) and production designer Mark Friedberg (The Ice Storm, Haynes's Far from Heaven), Haynes carefully unspools all the drama packed so tightly into Cain's terse novel, drawing it out to richly complex, suspenseful effect. The team's self-professed model (discussed at some length in the discs' extras; see below) was the languorous, revisionist period films and neo-noirs of the '70s, Hollywood's last Golden Age--Thieves Like Us, Chinatown, Klute, the Godfather films, The Long Goodbye, et. al.--and their astute observation and intuitive application of these influences to Mildred Pierce pays off in every naturally-lit long take, slow zoom, relaxed and well-composed tracking shot, and startlingly idiosyncratic compositions frequently made via reflecting, refracting, and/or framing surfaces. Over its course Mildred Pierce becomes an entire world, an experience unto itself, albeit one redolent with smart (if melancholy and troubling) parallels to the contemporary American experience. It is a boldly conceived, brilliantly executed achievement--a cinematic achievement through and through, and yet another indication that certain TV outlets are the new, more welcoming, accommodating, and viable home of choice for narratively intelligent and visually ambitious filmmaking of the highest order. 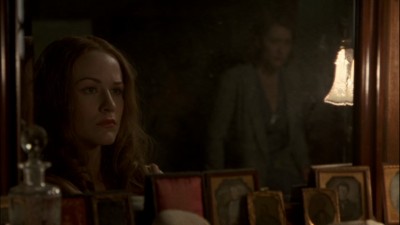 
Much of Haynes's and cinematographer Ed Lachman's discussions about their visual approach in the discs' extras are centered around paying homage to that brilliant naturalism brought by DPs like Gordon Willis to '70s films by Coppola, Altman, Polanski, Pakula, etc., and that tone and feel are there everywhere in the miniseries, with one eye-dazzlingly rich and nuanced visual after another deriving from expert perception of shadow, light, and color--as well as the uniquely old-fashioned, cinephile's-dream celluloid texture and grain achieved through Lachman's shooting on 16 mm. Every bit of it is here, pure, alive, and untainted in any way--with all skin tones natural-looking, lighting dynamic, and blacks rock-solid--in a magnificent transfer (AVC/MPEG-4 encoded, mastered at 1080/24p, and at the original broadcast aspect ratio of 1.78:1) that lets every detail shine so beautifully, it makes one slightly regret that it was "only" a TV miniseries for the sole reason that these rich, imaginatively rendered images look made for the big screen.


The DTS-HD Master Audio 5.1 soundtrack lets all of Mildred Pierce's sonic layers--from ambient sound and dialogue throughout, to a deluge of rain in the third episode's huge storm scene, to all the diegetic music (both popular hits heard on the radio and performed classical pieces), to those melancholy bass notes in Carter Burwell's unforgettable theme music and score--absolutely engulf the viewer in the aural sense in much the same way the miniseries's visual dimension absorbs and immerses the eye. That is to say that the sound, as meticulously and conscientiously presented here, is not only free of flaws but balanced just right to maximize the sound design's richness, clarity, and sensuality.


--"The Making of Mildred Pierce," a half-hour featurette shown on HBO and at the Mildred Pierce website ahead of the miniseries's airing, featuring extensive interviews with the entire principal cast and crew, each of which is significantly more involved and revealing (for all the promotional polish with which they're presented) than things of this sort usually allow for.

--There is an approximately five-minute "Inside the Episode" conversation with Todd Haynes, with film writer Robert Polito as the interlocutor, to accompany each episode; these enlightening and nicely contextualizing segments would make either a perfect introduction or a thoughtful, added-depth postscript to the main event of the episode itself.

--An audio commentary for episodes three and five in the form of a conversation between Haynes, co-screenwriter Jon Raymond, and production designer Mark Friedberg, in which what sounds like just a relaxed, friendly, often humorous conversation between the three collaborators reveals an astounding amount of detailed screenwriting/adapting, pre-production, visual, sonic, design, and even budgetary background. One understands why the creators would narrow their probably taxing commentary duties down to two episodes, but this additional layer, with all the enthusiasm and openness brought to the proceedings by these three, would certainly have been welcome on all five installments.

--The Blu-ray "Collector's Edition" of Mildred Pierce also contains as a bonus the DVD edition (not under review here), with all four discs (two Blu-rays, two DVDs) packaged in a handsome and logistically user-friendly, sturdy cardboard case. 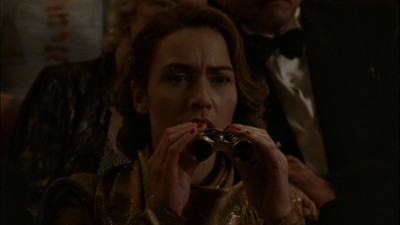 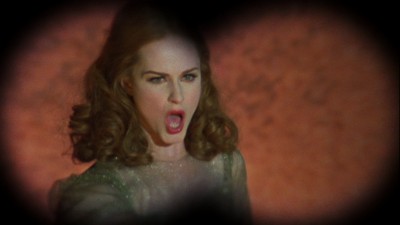 
Mildred Pierce contains an embarrassment of riches--its astute, effective adaptation to teleplay of the vibrant, relevant source material; its stunning cast (Kate Winslet and Evan Rachel Wood give performances for the ages, but all the supporting actors--Guy Pearce, Melissa Leo, Brian F. O'Byrne, etc.--give their considerable, impressive best, as well); and the imaginatively gorgeous, textured look granted by its near-impossibly accomplished cinematography and production design. The entire symphony is conducted by the visionary hand of director Todd Haynes, one of our most consistently unpredictable, inventive filmmakers, who has done perhaps his most ambitious work to date (and that is saying something) in giving us his take on James M. Cain's story of a courageous, driven, complex American woman as she traverses and contends with her world, its values, and the role(s) it offers her. Time and repeat viewings (this was my second time, and I certainly look forward to watching it again) may just prove Haynes's Pierce to be a classic; for now, it's an unqualified must-see, very probably a must-own, and Highly Recommended.