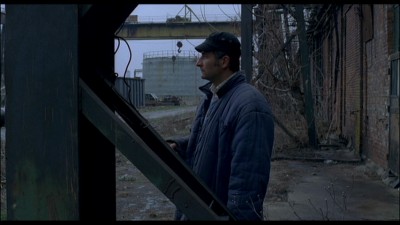 Aurora is a beguiling masterwork, a film so quietly radical and ultimately sublime that I'm ready to watch it again, right now, despite its three-hour duration. Written and directed by--and starring--Cristi Puiu (writer/director of 2005's The Death of Mr. Lazarescu), the film is a murder-mystery, but the way in which that mystery is presented to us--and what is and is not felt as "mysterious" through the film's boldly unique emphases--is utterly disorienting and unexpected, singlehandedly breathing new life into a story that has been done many times before and transforming it into something urgent and uncanny.

Puiu adopts an aesthetic approach of disarming, stringently adhered-to realism that in his hands has the paradoxical effect of furrowing our brows more deeply than any surrealistic David Lynch or Dusan Makavejev film you'd care to conjure. We are shown all the routines and peregrinations in the busy but isolated life of a Romanian man and Bucharest resident in his early 40s called Viorel (played with astonishing skill by Puiu himself): his work, his home life, his calls paid to various friends, family, and a lover, all of which is actually depicted, played out for us rather than encapsulated or shorthanded. But the more calm and naturalistic the manner in which we are shown Viorel in the process of living his life--sitting at his desk in the office of a large, loud, austere factory where he works; visiting a young woman who seems to be his lover, who has a daughter that seems not to be his; lounging in his own stripped-down apartment, evidently in mid-renovation, where he is visited both by an older couple with whom he seems very familiar and by a group of men whose job is apparently to remove most of the furniture and belongings--the more puzzled we become and the more questions we have. Who are the various people we're being introduced to, and what can we deduce from Viorel's relationship to them from the interactions we witness? Viorel's work clearly involves that factory office, some dossiers he totes around everywhere with him in his omnipresent backpack, and a fair bit of driving around Bucharest, but what does he do for a living? And why do so many of his exchanges with people seem marked by terseness and a vaguely confrontational defensiveness on his part? 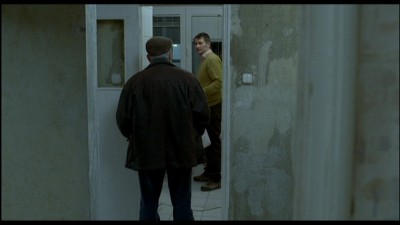 The questions multiply as Viorel's routine is revealed to also include a dedicated (if not obsessive) interest in firearms and what appears to be the regularly indulged-in stalking of and spying upon a pretty, nice-looking young woman and her two little girls. Money often changes hands during his various encounters, and there are oblique references to some web of financial and personal obligations the specific nature of which are left unclarified, as well as recurrent accusations that Viorel is petty and grudgeful when it comes to such matters. Due to the film's deep commitment to its realist aesthetic, no lines are drawn to create any sort of diagram of motivation and relationship, which may very well have the subversive effect of forever ruining for us the kinds of explicatory conversations of self-identity and announcement of personal information that movie characters always seem to helpfully partake in despite the near-total absence of that kind of conversation in life, especially among people who already know each other. It is also because of this radical realism that the two scenes in which Viorel coolly commits premeditated, murderous acts of violence so are very disturbing; he performs each killing as if it were just one more item on the circuitous itinerary of errands and visits we've been following along for. We do not know specifically who the victims are, what their place in Viorel's life is, or why he's killed them, so it is (in a way that strikes me as refreshingly moral when it comes to depictions of violence in film) the act of murder itself that is highlighted as shocking, extreme, and shattering, in part because of the suggestion that if this plain, modest, very ordinary-seeming man with his bland routine is able to do it, then any one of us may be capable of it, too (particularly, Puiu seems to imply throughout, in a society where the mutual responsibility and care of human relationships unmotivated by profit or advancement have been systematically replaced by utilitarian, mercenary capitalism of the sort that has long run rampant in the now excessively deregulated, unstable, cutthroat, and crime-and-corruption-ridden former Soviet bloc). 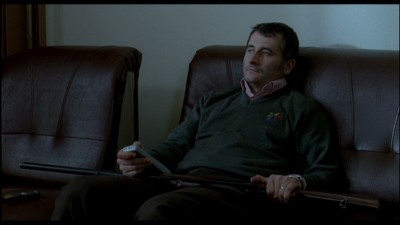 The film builds tension in this way for nearly its entire three hours, with precious few clues sustaining us (we do find out precisely what Viorel's relationship is to one of his stalkee's little girls, which in turn leads to a few more lightbulbs over the head to hold us) until, in the final 20 minutes, virtually all of the multitudinous questions that have been gnawing at us are abruptly answered in a mordantly funny, extended confession scene that takes place in a Bucharest police station. However gratifying those answers are, however, it seems clear that a tidy summing-up is far from the film's goal; "well, that explains that" somehow feels like a glib response to that concluding rush of spelled-out explication. Instead, the point seems to be the contrast of the straightforward, verbalized, boiled-down "whole story" with what we have gone through during the film's long, stark process of close observation, which has frustrated our habitual need for quick and ready confirmation of our deductions. That process does have some cinematic antecedents here and there--in the mesmerizing rituals of Chantal Akerman's Jeanne Dielman, for example, or in the unexplained, inexplicable, detachedly observed violence in Gus van Sant's Elephant; the rarity of this sort of thing, however, attests to both the creative tightrope a filmmaker is stepping out onto when they put themselves in for those long, steady, unblinking takes (I don't even want to think about the nerve-wracking pain of starting an unbroken five-minute shot over because of a technical or performance flub at minute four and a half) as well as to the perceived unmarketability of anything that really, truly keeps the audience guessing. But the particular way in which Puiu uses his technique to build up/release tension and provoke reflection is something I don't know that I've ever experienced in a film before. It feels like an innovation that is at once so simple and so profoundly transformative of the story, the characters, and the audience's experience of both, that the only meaningfully applicable word that comes to mind is "genius." 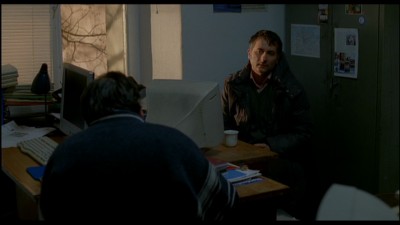 
I wouldn't go so far as to call the transfer (at the original theatrical aspect ratio of 1.85:1, presented anamorphically) a disappointment, but there is some notable aliasing on the credits (white/yellowish on black--a magnet for that particular flaw--and in a tiny font) that makes them virtually illegible, as well as a general second-tier quality of sharpness throughout, along with rare print "popping" in the form of microsecond-long luminous white spots that are noticeable each time they occur, if just barely so. I would have to place Aurora, transfer-quality-wise, in my bottom half of Cinema Guild release rankings, but that doesn't mean it's deeply flawed, overly distracting, or actively displeasing in any insurmountable way; just that, in a perfect world (and without meaning to diminish or sound ungrateful for the privilege of having Aurora available at all), this stunner would be the kind of film for which there would be no question of not giving it the sharp, high-definition Blu-ray release it well warrants.


The sound is a finely modulated and vitally important component of Aurora, and both of the Dolby Digital soundtrack options available on this disc--2.0 stereo or 5.1 surround--are clear as a bell, with all of the film's sonic environments rendered perfectly full and vivid. 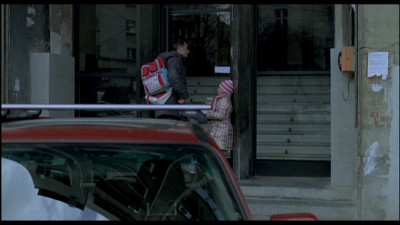 
--A very confidently done, prizewinning 15-minute short film by Puiu from 2004 entitled Cigarettes and Coffee (perhaps the English translators meant it as some sort of tribute to Paul Thomas Anderson's early, Hard Eight-prototype short of the same title, and/or Jim Jarmusch's 2003 feature, though a more precise translation of the title would be something like "a carton of Kents and a packet of coffee"), in which Mimi Branescu (Tuesday, After Christmas) plays a member of Bucharest's new post-communist yuppie class who, despite the new, highly touted "free market," must grease the wheels when it comes to getting his laid-off father two more years of pension-securing employment by bribing an official with cigarettes and coffee--"just like in the old days, so nothing has really changed," as both father and son agree. The entire film consists of an exchange between the two over a snack at a posh (and, for the father, intimidating) upscale Bucharest eatery, the old man in dressed-down work attire, the young one in slick suit and tie. Cigarettes and Coffee is a well-detailed and -observed encapsulation of what has been gained and lost (at least from Puiu's point of view, which is quite credible and convincing) in Romania's transition from Iron Curtain satellite to capitalist quasi-anarchy. (This bonus film is presented non-anamorphically.)

--The film's theatrical trailer (which somehow manages to respectfully and accurately convey the tone, themes, and story of this subtler-than-subtle picture), along with a half-dozen or so trailers for other (highly recommended) Cinema Guild titles such as The Strange Case of Angelica and Ne Change Rien.


Yet another deceptively low-key masterpiece from Romania's seemingly (and hopefully) endless supply of great films and brilliant filmmakers, Aurora tells a simple story in exceedingly simple terms, showing up the over-complicatedness of a great many of its murder-mystery, suspense-thriller cinematic counterparts by accruing overwhelming suspense through nothing more than its withholding of the kind of expository information that most films seem to feel obliged to offer upfront. The film carries a tremendous aura of mystery but has not a single vague moment; as triple-threat director, writer, and actor, Cristi Puiu is immaculately precise when it comes to the principal character, his environment, and his actions, and the film could be a textbook example of the old "show, don't tell" chestnut, as well as a strictly-defined "action picture," though it is the opposite of fast-paced or slick. But Puiu's ultra-realist, show-everything approach, taken here to one of the furthest, purest extremes I have ever seen, paradoxically makes for a mystifying, incredibly intriguing, hugely rewarding experience of puzzlement, suspense, and, finally, revelation that brings on a rush of relief and gratification for having been so long forestalled. It's all courageously and exhilaratingly shot in incredibly observant, patient, subtly but finely composed long takes, the acting is simply superb, and the payoff is more mind-blowing, for all the seemingly plain straightforwardness of its long-withheld details, than any number of twist endings or last-minute shockers one could possibly compare it to. With Aurora, Puiui has cemented his place in the very top echelon of Romania's rigorous and rich contemporary cinema, topping his already near-forbiddingly accomplished The Death of Mr. Lazarescu. He is clearly a filmmaker worthy of the closest and most awed international attention, and his future output should be hotly anticipated by cinephiles everywhere. Highly Recommended.