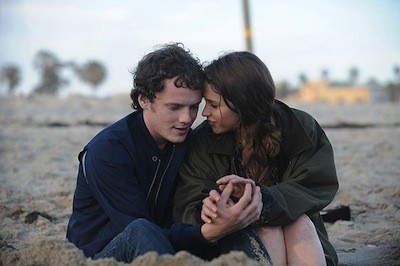 Four years of young love might not seem like a long time, but for Jacob and Anna, it's an eternity. Played by Anton Yelchin (The Beaver) and Felicity Jones (The Tempest), the international couple meet in college in Los Angeles while Anna is studying on a student visa. Both are in their last year, and when they graduate, Anna impulsively decides not to return to England and wait the 2 1/2 months to see her American lover again. This seemingly benign violation of immigration law turns what was supposed to be a short break into an extended exile.

Like Crazy is the story of the time spent apart. Though the film begins in the blush of new romance, the seasonal shift that follows is extreme and tumultuous. Both twentysomethings get on with putting their education to use and starting careers--he designs furniture, she is a writer working her way up at a fashionable magazine. Both are also serial daters, it would seem, as neither manages to stay out of a relationship for long. Jacob is sleeping with one of his employees (Jennifer Lawrence, Winter's Bone), an ongoing affair that makes his later indignation over Anna's indiscretions more than a little hypocritical. If there is one real flaw in the script, it's that it tips the scales against Jacob to the negative. His selfishness far outweighs any bad choices Anna makes, and this inequality unfortunately causes us to lean away from them eventually sorting everything out. Then again, the other guy (Charlie Bewley from the Twilight series) is a bit of a prick, so maybe Anna has a "type." 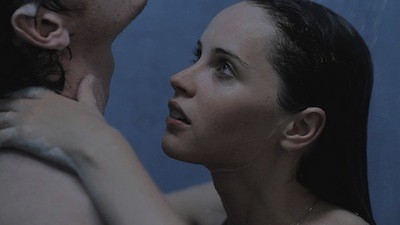 If this were a more goopy romantic movie, this lack of balance could have been a more fatal misstep that ultimately ruined Like Crazy. Writer/director Drake Doremus (Douchebag) isn't concerned with good times and happy endings, however, so it kind of works. Like Crazy is basically Once for realists. The long-distance relationship is a thorny one, made all the worse by the legal woes that drive an insurmountable wedge between Anna and Jacob. They spend more time apart than they do together, and not even drastic measures can fix that. He can only go to her, she can never go to him. Tearful phone calls give way to passive aggressive text messages.

Doremus adopts a fleet-footed, verité visual style to keep Like Crazy in the moment even as months pass in a blink. The director has a facile sense of time, skipping over dry patches as if they weren't even there and sticking to the good stuff. He expertly cuts together improvised moments of affection and sadness, using the immediacy of digital shooting to allow his actors to be real with one another. The patchwork structure really permits Yelchin and Jones to be natural, to find their common rapport and do some genuine acting and reacting. The duo achieves authentic intimacy, and they are equally convincing in good times and in bad. It doesn't take long before their performances stop being performances and start to feel true. Granted, I didn't quite buy that two modern kids in their twenties would bond over solo Paul Simon records. That struck me as an author's choice. There is plenty of more current, hipper material on the soundtrack (Asobi Seksu, Stars, etc.) they could have picked from rather than forcing Graceland back into the pop culture landscape.

Like Crazy gets pretty heavy in its final act, and even at 89 minutes, it's a shade too long. The back-and-forth grows a tad tiresome. Still, it's worth sticking out, just to see how Doremus and his stars stick to their guns. Even in its failings, Like Crazy succeeds in capturing the hard work and the tedium that goes into making a relationship function. 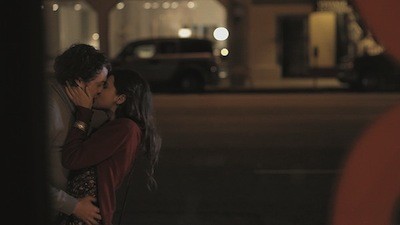