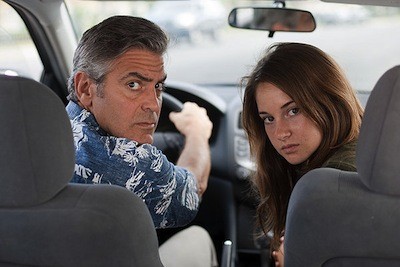 It's all in a name. Everything one might love or hate about Alexander Payne's The Descendants is right there in the moniker he chooses for his main character: Matt King. The first name is common, the last is regal. Matt is a regular man who imagines himself the master of his own existence, but he is about to find out how wrong he is. Payne does this kind of thing throughout The Descendants. He flirts with the obvious, burying his fortunes just beneath the familiar veneer. One point of view might brand the film maddeningly cliché. For me, Payne has provided an easy entryway to access an emotionally fulfilling life experience.

The always-amazing George Clooney plays Matt. Even without the ill-fitting Hawaiian shirts and shlumpy khakis, Clooney is a master at offsetting his good looks with an uncanny sense of what makes the Everyman tick. He plays Matt as haggard and frugal, a fellow who has let his common sense wisdom blind him to the vagaries of chance that dictate how we live. Matt's family has been in Hawaii since the 1860s, when a well-timed marriage allowed them to acquire vast quantities of prime real estate. The current generation of Kings have placed their holdings in a trust, but the law dictates they must dissolve this partnership in the near future. Everyone looks to Matt to seal one last land deal and refill the coffers.

The curveball for Matt is that his wife is in a coma following a boating accident. This leaves Matt to care for their ten-year-old daughter (first-timer Amara Miller) on his own. She is acting out at school, and Matt fears she won't be able to cope when she finds out that it's only a matter of days before her mother dies. Looking for added help, he springs his teenaged daughter, Alexandra (Shailene Woodley, TV's The Secret Life of the American Teenager), from the boarding school she's been attending to curb her youthful troubles with sex and drinking. She is, not surprisingly, angry, all the more so for the secrets she knows about her mother. The girl's blunt honesty is about to rock Matt's world even further. 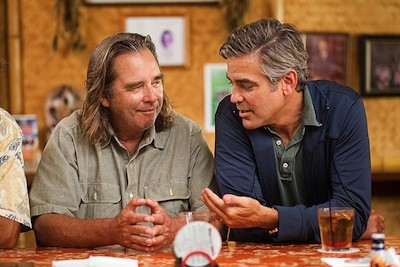 The Descendants is essentially Matt putting himself back together. He does this not just by exploring all the things he has wilfully ignored, but by rebuilding his family unit and taking a true patriarch role. It's a sad movie, grappling with mourning and loss. It's also achingly human, which for me is what makes Alexander Payne movies, from his first, Citizen Ruth, to the more recent Sideways, so rewarding. Like Cameron Crowe, he uses well-known Hollywood tropes as foundation for stories about real people struggling to find an appropriate reality within the fantasy. Unlike Crowe (whom I love, so please don't read this as a pejorative), he doesn't get cutesy about it. His characters are brittle and grounded, though their particular patch of ground is often very close to an emotionally dangerous drop-off.

The main bullet points of The Descendants' narrative are the most obvious. It doesn't take much pondering to know, for instance, what Matt will do when faced with his choices about the land deal. What makes Payne's movie work is how he fills in the spaces between. Some of the connectors are surprising. Robert Forster (Jackie Brown) has a tremendous small role as Matt's father-in-law, and his bulldog defensiveness sheds light on what kind of dad Matt has been. Other's you feel should be easy to predict, but Payne's misdirection is to get you invested enough not to notice. I was so amused and annoyed by Sid (Nick Krause), the hulking hormone that Alexandra insists go along on their family outings, I never even pondered what his function was for her or for the story until we hit that "well, duh" moment.

Payne uses the Hawaiian setting to lull the audience into this comfortable, magical place. From the laid-back fashion (are there any closed-toe shoes in The Descendants?) to the wide, wind-swept shots of surf and sand, everything is just so relaxed. Even the use of genuine local color, like the cafe musicians in the first part of Beau Bridges' splendid two-part cameo, only serves to reinforce the unique languor of island life. Payne and director of photography Phendon Papamichael (The Ides of March) also use the natural environment in more subtle ways. Namely, the damp and gray seaside pallor, which can be just as common as the sunny skies, underlines all of the comedy with an inescapable melancholy without letting the sadness become overbearing.

These elements all work in concert to make The Descendants emotionally satisfying. While it has a surface layer that could be seen as trite or even pandering, I think that's deceptive. Beneath the veneer, Payne's latest is surprisingly uncompromising. Even its final shots--which, when you think about it, echo the end of another Clooney vehicle, Michael Clayton--sell a kind of heart-warming family image, but the truth of it is, it's an image sold "as is." The King household is still a fixer-upper, and the hope we are left with comes from our belief and our keen desire for them to make it. 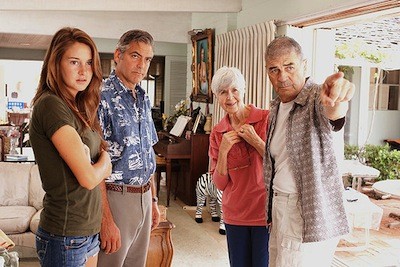