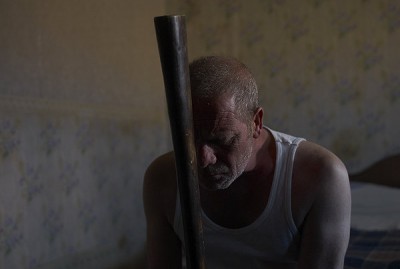 Tyrannosaur begins in a rage. Joseph, the bad-tempered main character, played with a palpable fury and frustration by Peter Mullan (Children of Men), stumbles out of the bookies, yelling at unseen enemies. His dog waits for him, chained up outside. With no one else to take his anger out on, Joseph kicks his faithful pet. The consequences are instantaneous, and so is Joseph's mood swing. He is remorseful, sad, and calm. The rage is gone.

It's a cycle familiar to anyone with a bad temper, and also one that can be indicative of an abuser. Joseph's wrath is practically manic. He rides a rollercoaster of anger and sorrow. We see him act in his daily life, alternately popping off at the people he encounters and then receding when challenged. Only that last bit is a feint. He pretends to defer to common sense before lashing out. The pattern scares even him, and during one of the comedowns, he ducks into a charity shop to hide. There, he meets Hannah (Olivia Colman, Hot Fuzz, The Iron Lady), a kindly religious woman unafraid to offer succor to a soul in need. Unsurprisingly, he repays her by being mean.

Hannah is trapped in her own abusive cycle. Her husband James (Eddie Marsan, Happy-Go-Lucky) is jealous and petty. He blackens her eye when he hears a rumor that she's been seen with Joseph, and then apologizes as if he were helpless to stop himself. Joseph seems sympathetic to her when she shows up with the bruise, but our fear is that he has been drawn to his woman because he senses she could be a new recipient of his fury. 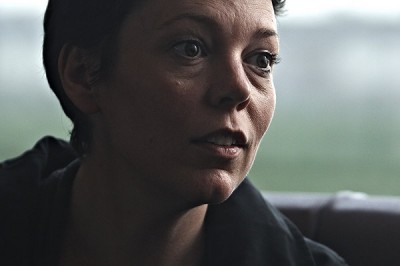 Tyrannosaur is written and directed by actor Paddy Considine, who starred in the middle portion of the Red Riding Trilogy; this is his feature debut, developing a short he made a couple of years ago. In this full-length film, he portrays a social environment plagued by pervasive violence. The approach is in line with the tradition of "kitchen sink" films from the 1960s: this is an everyday drama of average people caught in a cultural tailspin. The potential for destruction is everywhere, on every street corner and behind every door. Everyone is angry. Racial hatred comes into play, as does generational distrust. Most direct in Joseph's line of sight is the little boy he has befriended across the street. Sam (Samuel Bottomsley) talks to his neighbor when his mom has her boyfriend over. The boyfriend is a posturing prick with a pitbull who likes to use the dog to tease the kid. You can tell from the get-go that this won't end well.

Considine's drama revolves around two people who can't control their situation on their own finding some measure of stability together. The ironic divide is that while Hannah can't stop her husband's attacks, Joseph can't stop himself--it's the exterior threat versus the interior one. The main trio of actors are exceptional together. Marsan is menacing and small. He comes off as truly demented. This contrasts well against Mullan's performance. Despite how terrible Joseph can be, he is not the cartoon that James is. Mullan conveys a deep, unknowable hurt within the rageaholic, and it's not just at the easy times, like when he talks about his late wife. There's real visible pain in his comedowns, and also in the way he wrestles to keep from flaring up again. Eventually, we come to trust that he won't hurt Hannah, and this is largely thanks to the trust she places in him. Colman has to roll with a lot of conflicting emotions, her character is the most complex, but she's more than able to portray any challenge the script throws her way.

Tyrannosaur is a difficult film to watch. The brutality and cruelty is harshly rendered, and those squeamish about abuse and rape will have a tough time making it through its scant 90-minute running time. Thankfully, Considine doesn't cheapen this bald material by creating an easy way out for any of the people caught up in the drama. The narrative does eventually work its way to a kind of resolution, and it is one that is emotionally satisfying, but it feels more like the first baby steps toward better lives than it does an all-powerful solution.

Video/Audio/Extras:
The copy of the DVD I received for review is not reflective of a final retail product. It is a screener meant for critical evaluation only; there are no menus, no extras, no audio options, and the fuzzy picture is watermarked. (The images you see here are taken from standard promotional stills.) Thus, I can't judge the technical aspects of the retail release of Tyrannosaur.

FINAL THOUGHTS:
Tyrannosaur is a difficult drama about the cycle of abuse that threatens to ruin the lives of three different individuals in England. An older man with anger issues befriends a kind-hearted woman stuck in a violent marriage, and together, despite their differences, they find a way to deal. Paddy Considine's script doesn't flinch from the more harsh truths of abusive relationships, but he also doesn't lessen the impact of these uncomfortable realties by creating cheap feel-good scenarios. While Tyrannosaur's story is hard to watch, the cast never is. Eddie Marsan, Olivia Colman, and especially Peter Mullan are all exceptional, capturing the humanity of the characters along with their respective troubles. Recommended. 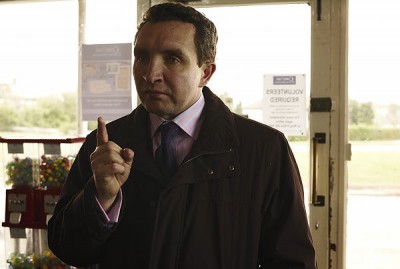