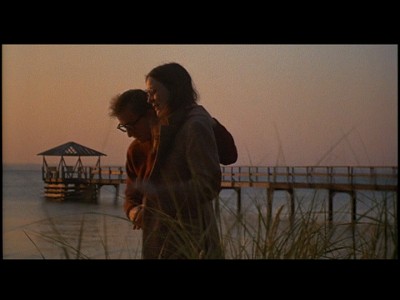 Please Note: The screen captures used here are taken from the 1998 DVD, not the Blu-ray edition under review.

Annie Hall isn't Woody Allen's best film, but it is inarguably the one that definitively marked his transformation from cinema-savvy comedian whose comic persona could sustain a feature-length movie to full-blown, serious cinéaste. Here, for the first time, the gags and one-liners are supplementary, even peripheral, to the main event; there's a more substantial vision to this film than would have seemed possible from Allen's prior efforts, a heart of cultured, fraught, modern-yet-nostalgic urban romance (romance in the city as well as romanticization of the city) that would beat, and continues to do so, through all of his subsequent efforts. But the film is surprisingly graceful and charming for a transitional work, with all the confidence Allen had earned through many years of skill-honing acting and, especially, directing work paying off in a remarkable, often impressive visual and narrative fluidity. He may have parlayed his artistry into greater things later on (I, for one, like The Purple Rose of Cairo, Hannah and Her Sisters, and Husbands and Wives even more than Annie Hall), but what Allen achieved in 1977 is imbued with the fresh energy of an artist stretching his wings and flexing untried creative muscle he's just become aware of, which lends it a special kind of joy and vitality that mark it off as a wonderful and memorable film unto itself, and much more than just a stepping-stone. 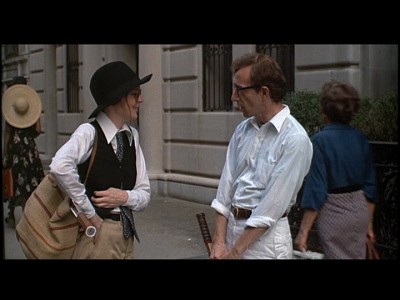 The story is a classic known to any even half-dedicated movie fan: The endearing but sadly not enduring couple comprised of Allen's Alvy Singer and Diane Keaton's Annie Hall have long since gone beyond being movie characters to become familiar cultural archetypes. (And though it wouldn't be fair to accuse Allen, as many have done, of always "playing himself" or only ever playing variations on Alvy, there is a little Alvy Singer in almost every character he's played since.) Singer is a quasi-autobiographical construction through which we discover the pessimistic yet romantic philosophy and sensibility--as well as the sexual, conjugal, and familial history--of a certain fairly prominent Jewish comedian from New York. The contours of that sensibility stand out sharply when illuminated by the light of Annie Hall, a small-town girl from Chippewa Falls whose wide-eyed naiveté, self-deprecating flutteriness, and singular, slightly kooky je-ne-sais-quoi (perhaps best embodied by Annie's famous, pseudo-androgynous, seemingly haphazard but eternally cool hat-vest-tie ensemble, created by costume designer Ruth Morley) would have perfectly complemented the existence of Alvy Singer, just as his Henry Higgins approach could have reciprocally offered something to Annie's Eliza Doolittle. But "would have" and "could have" are an inbuilt part of Alvy Singer's tragicomic conception of love and life, its perpetually self-fulfilling prophecy summed up in the film's twice-repeated line that "I wouldn't want to belong to any club that would have me as a member." In a way, the melancholy regret over the way things can never work out quite for the best is, in this way of looking at things, just as sweet as when things seem (illusorily, of course) to be going splendidly, and Annie Hall expresses this tension between romantic idealism and inescapably compromised, disappointing reality in fluent cinematic language, so that the flashback montage near the film's conclusion, after we know that Alvy and Annie are truly and finally (if amiably) over, is more tender and optimistic than the moments being flashed back to were the first time we've seen them, when they were "really" happening. What makes the film's ending so sad yet somehow so reassuring is that those idealized, re-configured, edited-into-pure-goodness recollections are what we always have, if nothing else, to protect us from the desolation represented by the empty city street corner with an anonymous river of humanity/traffic going by that is the final image we're confronted with after Annie and Alvy have left the frame and before it cuts to black. 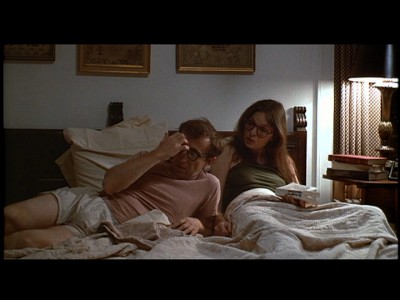 Those flashbacks are just one example of the film's consistently, refreshingly loose and digressive technique and structure, which seems to jump free-associatively and un-self-consciously back and forth in time in an insouciant way that owes as much to the '60s French New Wave example of Godard and Truffaut (just as its unabashed conversationalist tendencies owe a debt to New Waver godfather Eric Rohmer) as the films of Allen's cinematic colleagues of the fecund '70s American cinema like Scorsese, Coppola, and Altman. And speaking of Coppola, perhaps an even more significant Coppola/Godfather borrowing than Diane Keaton is Allen's employment of cinematographer Gordon Willis, who brings to Annie Hall the same knack for only-on-celluloid beauty--the naturalistic because more naturally lit gradations in color, confined mostly to the cooler side of the spectrum; the bold willingness to let dark scenes be dark, without overlighting, among other visual hallmarks we think of automatically when we think of '70s cinema--to Annie and Alvy as he did to Klute and the travails of the Corleones, which gives the film a very strong visual identity, yet another distinction from Allen's visually cruder earlier work. 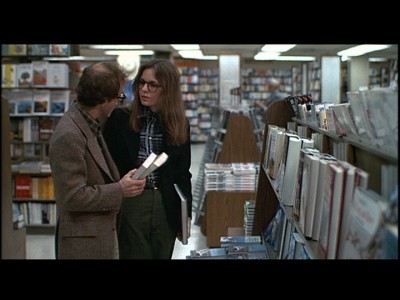 There are those who compare this, Allen's first real artistic triumph, unfavorably to his later films, dismissing them as uptight, too self-conscious (one fan of my acquaintance sneers "stuffy" at September and Another Woman, both lovely films). That's not a view I share, but I can see where it comes from; there is something carefree about the idea of Annie Hall and the way it's been made and put together that could make it feel like it wears its pleasurableness more openly on its sleeve, with more apparent warmth and self-deprecation to stave off what some have found to be an overly deferent, even "elitist" later preoccupation with affluent artists and intellectuals in the later films. In any case, it is, if not his very best picture, the warmest and most accessible (and most casually funny) of his greatest works, and the one with which any new convert to Allen's cinema should be initiated. It is also, of course, a title without which most personal movie libraries would have to be considered incomplete, and this long-awaited, very nice-looking and -sounding Blu-ray edition (quite noticeably superior to the DVD of yore) affords a long-awaited opportunity to fill in a significant gap. 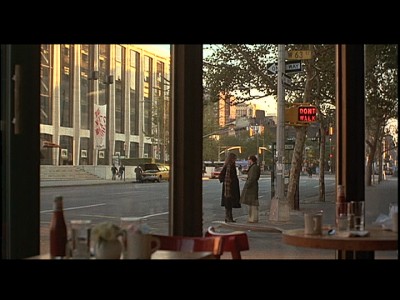 
Having seen the film many times over on VHS and DVD, I can confidently say that this Blu-ray presentation (1080/24p, AVC/MPEG-4, at the correct theatrical aspect ratio of 1.85:1) is the best Annie Hall has ever looked. There is no aliasing or other compression artifacting apparent, and none of its fine Gordon Willis grain and nuance (particularly in the darker scenes, which retain a gorgeous texture) have been fussed away with too much DNR. The experience of watching it this way is truly the next best thing to seeing a brand-new print conscientiously projected for the first time.


Thankfully, nobody saw fit to ruin the Woody Allen aesthetic by pumping up the very purposely old-fashioned mono of the film to unnecessary 5.1 super-sound; the soundtrack is DTS-HD Master Audio 2.0 mono. Any popping or clicking or buzz has been nicely cleared away, though, so that the sound, simple as it is, comes through beautifully warm, clear, and sharp.


Nothing other than the film's sort of odd original theatrical trailer, which seems to reveal a bit of confusion on the part of UA's marketing department about how to go about selling Woody Allen's big artistic step up to the masses.


Whatever your particular relation to Annie Hall--whether it's your favorite film in the world or something you more casually admire or just enjoy--you'll want to switch out your old DVD (or, god forbid, VHS) of the film for this still bare-bones but very nicely technologically upgraded Blu-ray edition. It's the kind of treatment that Allen's first truly visually cohesive, dramatically and romantically more profound offering has long deserved; Annie Hall counts in many ways as the beginning of Allen's career as a "cinematic" filmmaker, and it can finally look it to the eyes of the home viewer. For myself, at this point in my film-watching life, revisiting it is like reconnecting with very old, very familiar friends, and I suspect that will be true for many reading this. That's a pleasure all its own, and perhaps a deeper one than seeing if for the first time, but Annie Hall is the kind of unique experience that forces us to admit being slightly envious of anyone who's getting to know these characters and their sweet, neurotic, hopeless romance (and, by extension, the root source from which all the riches of Woody Allen's filmography sprang) for the first time. The film is by now a necessary ingredient in anyone's frame of reference/basic cultural literacy, but over and above that (and this doesn't hold true for nearly all movies that could be so categorized) it's an actually excellent, finely and ingeniously made work of art whose qualities make one forget its era-defining, towering familiarity to all (even to those who've only seen clips in Oscar retrospectives) and just engage directly with it time and time again as an especially enjoyable and uniquely moving utilization of the cinematic medium as a reminder of some of the funnier and sadder aspects of human life and love. Highly Recommended. 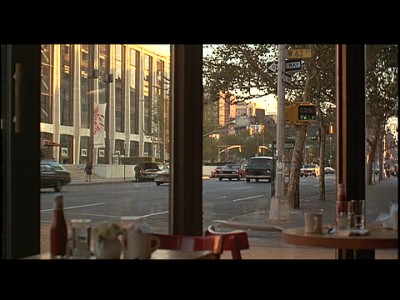