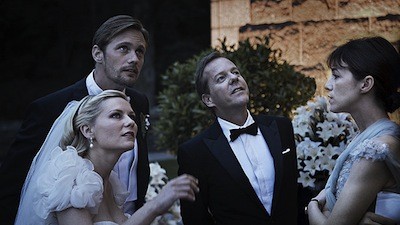 One half of Melancholia is about a wedding; the other half is about the end of the world. I'll let you figure out which is which. Six of one, half a dozen of another, if you ask me.

Kirsten Dunst and Charlotte Gainsbourg play sisters Justine and Claire. Justine is a bit of a basket case. She suffers from crippling bouts of depression, a condition that it's clear her family has had enough of. We meet both sisters on the day of Justine's wedding. Claire and her husband (Kiefer Sutherland) are throwing the reception party at their insane palatial estate (it has an eighteen-hole golf course!) and Justine is two hours late. The limo she and her new husband, Michael (True Blood's Alexander Skarsgård), hired for their drive was too big to get up the mountain. Justine is already at odds with her new life status. She is the product of a broken home, and the conflict between her father and mother (John Hurt and Charlotte Rampling) is quite clear at the party. As the night wears on, the bride realizes she has made the biggest mistake of her life. By sunrise, the whole thing has fallen apart. That's part one.

Part two picks up some time later. Justine returns to Claire's house an absolute wreck. Her sister takes care of her, but other concerns are bothering Claire. Namely, a planet named Melancholia has been hiding behind the sun for who knows how long. It recently revealed itself by changing its orbit and some believe it is on a collision course with Earth. This frightens Claire, but Justine is blasé about the whole thing. The Earth is an evil and rotten place, good riddance. 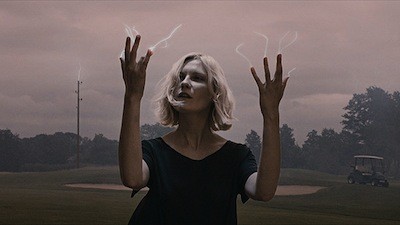 With such pronounced misanthropy, it should be no surprise then that Melancholia is the latest from irascible Danish auteur Lars von Trier. Known for such provocatively brilliant, difficult works as Dogville and Antichrist, Lars is perhaps cinema's most consistently punishing director. His movies are rife with emotional peril and intellectual gamesmanship. Melancholia has been billed as his version of a science-fiction movie, but it's not like this is an outer space adventure. Melancholia is a doomsday scenario where the impending destruction is a metaphor for mental instability. Sadness lurks behind every forced smile that Justine wears at her wedding; the sunshine gives way to death and gloom. The movie, with its slow-motion opening sequence that shows the characters moving in tandem with an unforgiving universe, actually has more in common with Malick's Tree of Life than it does any of this year's special effects blockbusters. One can also see the influence of Lars' hero Andrei Tarkovsky. The final outcome of Melancholia owes a heavy debt to Tarkovsky's swan song, The Sacrifice, though von Trier goes literal where his Russian predecessor kept things in the realm of imagination.

von Trier has perfectly cast his lead actresses to fulfill their assigned roles. Dunst is beautiful and frail, her sad eyes conveying the weight of the world, her body language communicates how she is increasingly resigned to her fate. Gainsbourg, on the other hand, is possibly more bi-polar, at least in terms of what is demanded of her in the script. Claire is the caretaker who first gives herself over to spite and then succumbs to worry. Her moods flip as fast as her sister's, though the actions of both end up having an ironic effect on the viewer. The deeper that Justine sinks into herself, the more I find myself sympathizing with her; the more Claire tries to reach out and connect, the more she pushes us away. Also, for as selfish as Justine is supposed to be, it's Claire that reveals a true nastiness. Her dig at her husband in their first scene is one of the more devastating insults of the movie. Theirs is a brutal family dynamic: father is a philandering "free spirit;" mother is a frigid heel. Both have abandoned their children in their own way.

For all the ugliness of the core narrative, Melancholia is one of the prettier films to hit cinemas this year. The scenes on the golf course the night of the reception are stunning. The natural surroundings are possessed of such a loveliness, they are practically surreal. (Likewise, Dunst in her wedding dress.) The movie was shot by Manuel Alberto Claro, who also photographed the fantastic but little seen Danish film Reconstruction back in 2003. I was surprised Claro hadn't also shot Antichrist, because visually this film has quite a bit in common with Anthony Dod Mantle's work in that feature. The slow rain of objects from the sky, the chilly colors, and the distant vantage points give Melancholia an operatic beauty, but on a level so calculated it is practically Kubrickian. von Trier isn't interested in the outer trappings of real life; rather, he is portraying an abstracted variation of the same.

Which gives him all the more room to sift through the dark places unique to the inner struggle of his characters. Melancholia is not an easy film. As with most of von Trier's movies, it is infected with a mental disease that is both unsettling and compelling. It takes dedication to work through at times, but the rewards are deep and plenty for those who don't shy away. 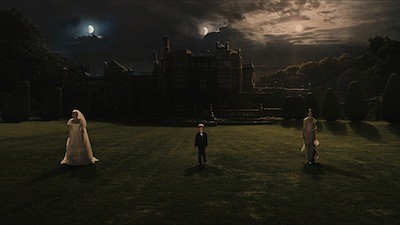