Paramount // Unrated // January 10, 2012
List Price: $49.99 [Buy now and save at Amazon]
Review by Stuart Galbraith IV | posted January 19, 2012 | E-mail the Author
Since reviewing the first season of Hawaii Five-O (1968-1980) some five years ago, I've received lots of mail from hardcore fans of the program. Most enthusiastically agree that in its early seasons Five-O was one of the best of its kind and unique for a number of reasons. At the same time, almost unanimously, were cautionary remarks along the lines of, "But wait till you see those twelfth season shows! They're the worst! They should have quit while they were ahead!"

I reviewed Hawaii Five-O - The Eleventh Season last September, and yep - it was pretty darn tepid. But Hawaii Five-O - The Twelfth and Final Season surprised me a little. While but a shadow of what the show had been in its early seasons, there's a belated attempt to freshen the pot with several new faces, and to attempt things that hadn't been done before. And though many of the episodes this season are spectacularly bad, comparatively they really aren't any worse than the few contemporaneous cop/detective shows still hanging on during the 1979-80 season: Barnaby Jones, Charlie's Angels, and Vega$ for instance, with the great Rockford Files being the major exception to the rule.

And as Mike Quigley's indispensable Hawaii Five-O Home Page rightly points out, even the worst episodes play significantly better than before because of their sparkling new digital remastering. The added sharpness and notably better color and contrast don't make the scripts any better, of course, but at least they're far more attractive to look at, with the beautiful Hawaiian scenery particularly benefiting from this.

Most of what I have to say about the series and these DVDs was already stated in my earlier reviews of Seasons One, Two, Three, Four, Five, Six, Seven, and Ten (we weren't sent review copies for the eighth and ninth seasons), except to note a few particulars about this set and to say, as usual, if you've been buying the earlier seasons all along, despite the dip in quality you're bound to want this one, too. 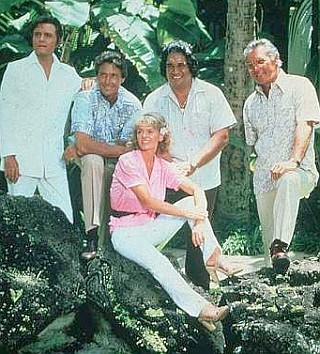 Last season, McGarrett was like a king without a kingdom. Zulu's Kono was by this time a distant memory, the actor having been fired way back in 1972. Kam Fong's Chin Ho Kelly, a critically important supporting character, was killed off at the end of season ten, while season eleven turned out to be James MacArthur's last. Apparently, while on vacation in South America, MacArthur simply called his agent and said, "I'm done." He never came back. Duke Lukela (Herman Wedemeyer), former cop, tried to fill the vacuum, but there were just too many big shoes to fill.

Season Twelve, sporting a more pulsating if not outright disco-ized and reorchestrated title theme, starts promisingly, introducing three new supporting players. Moe Keale's Det. "Truck" Kealoha was little more than a Kono clone, but he was also a native Hawaiian, helping to keep the series' make-up racially integrated. More importantly, William Smith (as Det. James "Kimo" Carew) and Sharon Farrell (as Det. Lori Smith) each brought something new. Gravelly-voiced, muscular Smith, better known for playing badass bikers and the like (bare-knuckling it with Clint Eastwood in one film, believably playing Arnold Schwarzenegger's super-strong father in another), makes a stark contrast to sensitive good guy Danny Williams. Smith looks like he could pound you into the ground like a tent stake. Carew is introduced in the season opener as a vengeful Boston cop in Hawaii tracking down the man who murdered his wife and child.

Farrell, meawhile, turns up in the second episode, which rather unimaginatively has her playing a similarly vengeful Hawaii-based cop tracking down the men who murdered her police detective husband - on their anniversary and the day he was supposed to start his new job at Five-O. McGarrett ultimately invites Lori to take his place, which is mighty considerate considering she comes within an inch of murdering her husband's killer in cold blood. Farrell, always good playing distraught characters (see It's Alive, her pièce de résistance) has decent chemistry with Smith, their characters' similar tragedies providing a unique bond.

The first two shows to air, the feature-length "A Lion in the Streets" and "Who Says Cops Don't Cry" aren't bad, especially the former, in which a Hawaiian mobster (played by Ross Martin) pits indigenous Hawaiians against the United Resort Workers, union men. It's the kind of politically charged storyline writers of cop shows today wouldn't touch. Further, a very clever idea is introduced when a Hawaiian witch doctor declares McGarrett a kapu (a cursed one). Officially ostracized, even Duke and Truck dare not go near him, leading to some intriguingly awkward office politics.

Alas, it's all for naught. By mid-season the waters are muddied with one terrible episode after another, shows like "Voice of Terror," "School for Assassins," and especially "A Bird in the Hand," which Quigley identifies as the all-time worst of Five-O's nearly 300 episodes.

The twelfth season shows never cracked the Top 30 in the ratings, and the writing was on the wall. Farrell, quite in demand at this time, left mid-season and appears in less than half the season's shows. Lord and the show's producers, perhaps realizing the end was near, assembled something like a final episode, "Woe to Wo Fat," intended as a final confrontation between McGarrett and his Moriaty, super villain Wo Fat, memorably played by Khigh Dhiegh, who was actually born in New Jersey of Egyptian-Sudanese heritage, but famous for villainous Asians since The Manchurian Candidate (1962).

McGarrett goes undercover, masquerading as esteemed scientist Elton Raintree (Lord plays the real Raintree as well). With his old professor makeup, Lord is a dead ringer for Billy Connolly. He also looks a lot like Steve McGarrett in a disguise worthy of Inspector Clouseau. Why doesn't Wo Fat recognize him at once? It's a show as tired as its leads; Lord was pushing 60, and Dhiegh was 70 and both look it. Lord with his singularly hairy hands and artificially thickened hairstyle, and Dhiegh, with his shaved head but sporting impressively bushy ear hair, make this an episode sufferers of chaetophobia will want to avoid. Still it's good to see the series have some closure, even if its final image is of Wo Fat wearing outrageously anachronistic striped prison garb, the kind that went out with two-reel comedies.

The end of Hawaii Five-O was, sadly, pretty much the end of star Jack Lord as well. His only post-Five-O appearance was a small part in a TV movie/pilot he produced and directed, M Station: Hawaii (1980), but while that aired in the summer after Five-O was cancelled, it was actually filmed before the start of season twelve. During the regular season, the already infamously combative actor was even more short-tempered than usual, and according to some that were there, already exhibiting the early signs of Alzheimer's Disease. After Hawaii Five-O finished production, Lord went into seclusion and all but vanished. He died in 1998, apparently years after his personality had succumbed to the illness.

Hawaii Five-O - The Twelfth and Final Season looks great. The image is sharp and detailed, near flawless. The season, now squeezed into a standard-size DVD case, is on five single-sided, dual-layered DVDs with all 19 twelfth season episodes. The Dolby Digital mono is fine, as are the optional English subtitles, though CBS has dropped the usual Spanish audio track and Spanish and Brazilian Portuguese subtitles, options included on earlier season shows.

Two oddities. The first is a faded series promo of unknown origin, perhaps a generic network ad intended to lure viewers to the season opener. "Crime Wave" is a hip-hop music video, not exactly appropriate, which is accompanied by clips from the show, most of which seem to be from the first season and the final episode.

If you're a hardcore fan, you'll probably want to stick with the series to this bitter end, while more general viewers are encouraged to check out Hawaii Five-O's first season instead. In some ways superior to year eleven but still pretty bad, overall this is a Rent It rather than a purchase.

A final special thanks to Hawaii Five-O fan Howard S. Sample, whose comments and enthusiasm enhances these reviews.