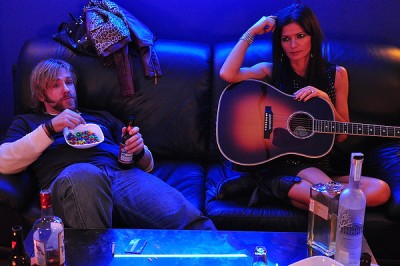 Jimmy Testagros (Ron Eldard, Super 8, TV's ER) is having a bad day, and before he sees the next sunrise, it's going to get a whole lot worse. Jimmy has spent the last two-and-a-half decades on the road working the crew for hard rock band Blue Oyster Cult. As the film Roadie begins, Jimmy is on the phone, having been abandoned in the middle of Michigan, and he's trying to find out why he was suddenly fired. With no explanation or salvation forthcoming, Jimmy has to return to the one place he's been avoiding for most of his adult life: home.

Home is Queens, NY. The last time Jimmy was there was to attend his father's funeral. A lot has changed since then. His mother (Lois Smith) is showing early signs of senility, and the man next door has had two strokes. Jimmy hopes he won't have to stay long, and he begins exaggerating what his role with the band was. He meets two high school friends, and he tells them he manages the BOC and even writes songs. Randy (Bobby Cannavale, The Station Agent) was a hard partying bully who always called Jimmy "Testacles," while Nikki (Jill Hennessy, Crossing Jordan) had once been Jimmy's girlfriend. She and Randy are married now, and she sings every Sunday night at a local bar. Jimmy still carries a torch for her and makes promises he has no hope of keeping. As the night wears on, and the controlled substances get a little less controlled, things build to an explosive pitch.

Roadie is the latest from Michael Cuesta, the director of L.I.E. and 12 and Holding. He co-wrote this film with his brother, Gerald Cuesta. While Roadie doesn't challenge our perceptions or ethical compass the way Cuesta's earlier films did, it is still as emotionally honest as we have come to expect from him. (I didn't care for L.I.E., but I really liked 12 and Holding.) Though the story here is a little predictable in how it is structured and even some of the revelatory elements that the final act hinges on, the telling never comes off as either forced or false. Cuesta uses the simplicity of familiarity to quickly get to the heart of the matter: these are three messed-up people clinging to the illusions of their youth.

As with any movie, the key to making it come across is casting, and Cuesta has created an exceptional ensemble of strong character actors and set them loose. Cannavale, Hennessy, and Eldard are all fantastic, quickly establishing a comfort zone and giving one another room to roam around within it. Eldard is particularly forceful. He appears in every scene and must ride the gamut of emotions, from anger to heartbreak to the most drunken of stupors. An aging rock dude is someone that could easily be overplayed. Let's face it, most rock 'n' roll stories, even when true, are just a string of familiar clichés. Everything about Jimmy--from his facial hair to the has-been band he keeps championing--is out of date, as delicately preserved as the crates of records in his childhood bedroom. Yet, what Cuesta and Eldard both get is that while Jimmy may look like a joke from the outside, he's never a joke to himself. That's the key to his humanity.

Roadie doesn't build to any great crescendo, but that's also kind of the point. This is Jimmy's life now, for better or for worse, and it's something he has to face. For as hard as his comedown is, the final moments have a gentle sweetness that leaves us feeling all right about where Jimmy has ended up. It's the Michael Cuesta way: whatever emotional ringer his characters might go through, there is solace in the fact that they always manage to somehow end up coming out the other side okay. 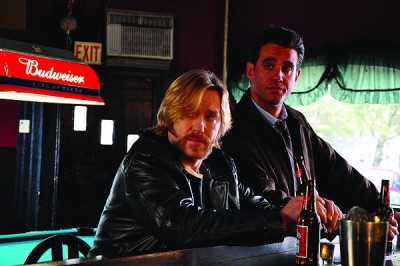 Video:
The 1080p transfer of Roadie is very good. It's not a knock-out, or anything, you won't find much that dazzles you, but yet, you won't really find anything to grouse about either. There are no glitches, no obvious compression problems, no enhancement. There is a decent filmic surface look, and colors are strong. In truth, this is probably what we could call an average Blu-Ray: an excellent presentation of a regular film as it should be, no added bells or whistles.

Sound:
The DTS-HD 5.1 mix serves the film well, with emphasis placed on dialogue and music, with some subtle ambient noise. When the rock takes over, it's not monstrous, but the audio does have a lot of heft.

Available subtitles are in Spanish and English Closed Captioning.

Extras:
A photo gallery and a very short look at the film from HDNet.

FINAL THOUGHTS:
Recommended. Michael Cuesta's Roadie is an efficient, honestly rendered drama about middle age and the places people end up despite the vision they originally had for themselves. Ron Eldard stars as Jimmy, a guy whose life is defined by movement. When he is suddenly forced to stop and get off the road, he finds himself at home for the first time in two decades, face to face with both people from his past and his own failings. An excellent cast, which also includes Bobby Cannavale and Jill Hennessy, makes the writing sparkle, and despite some predictable elements to the script, Cuesta delivers on the emotional promise of Roadie's central premise. 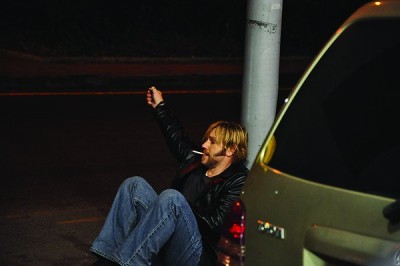