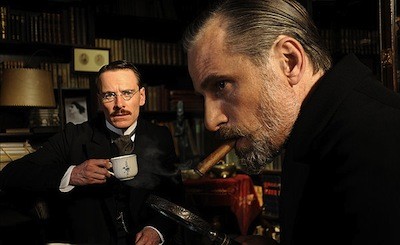 The foundations of psychoanalysis can seem like distant, almost legendary stuff. We rarely hear about how the men who built the business did so, we mainly hear about--and witness the continued impact of--their ideas. And though Sigmund Freud may be discredited and easily mocked in a lot of ways, many of his theories still have an effect on most storytelling. This is even more true for the concepts advanced by Carl Jung, particularly his views on the collective unconscious and study of archetypes.

The relationship between these two men is the center of A Dangerous Method, the new film from director David Cronenberg (Eastern Promises, Dead Ringers) and writer Christopher Hampton (Dangerous Liaisons). Their relationship, and one of Jung's patients and how she came between them.

Viggo Mortensen (Lord of the Rings) plays Freud, and Michael Fassbender (Jane Eyre) is Jung. At the start of the movie, which takes place in the early 20th Century in the decades leading up to World War I, Freud is already an established master and Jung is his acolyte. The younger practitioner is eager to use his mentor's methods in his practice, and one particular woman seems especially suited to Freud's revolutionary conversational approach. Sabina Spielrein (Keira Knightley, Atonement) is the daughter of a Russian doctor. She has fits of madness brought on by her masochistic tendencies. Jung is intrigued by her pronounced neuroses, and he hopes to get past them and put Sabina on the path to the normal life she was intended to have. This is a big difference between Jung and Freud. Where Freud just wanted to expose the illnesses of his patients, Jung hoped to cure them. With his help, Sabina ends up studying to be an analyst herself.

It's during this phase of their relationship that Jung crosses a line and begins having an affair with his former patient. Eventually, his wife (Sarah Gadon) catches wind of this and demands that her husband break off the affair. Distraught by the split, Sabina exposes the deceptions to Freud, setting up a battle between the apprentice and his father figure that would fit right into Freud's theories about child vs. parent.

A Dangerous Method is at its best in the early scenes, when the relationship between Jung and Sabina is heating up and the drama is taking shape. Fassbender is predictably appealing as the stoic, intelligent doctor, at once clinical and caring. Mortensen also gives a quiet performance, contemplating every cigar, choosing his every word carefully. It's nice to see him in such an austere role. 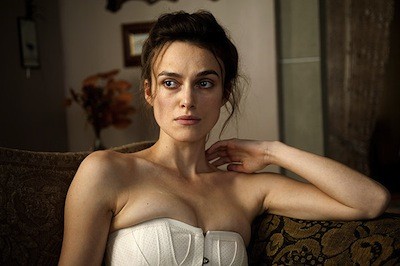 The measured reserve exhibited by the male stars makes Keira Knightley's performance seem like it is beamed in from another planet. It's hard to tell if she is particularly good or positively awful as the troubled woman. Are her grotesque contortions a brilliant rendering of mental illness or a gross example of overacting? Cronenberg compels her to bend and twist her body into alien shapes, her jaw protruding as if it had extensions. Judging by these scenes, I get the sense Knightley would do a mean velociraptor impression, but there is no evidence that a dream of being a dinosaur is the kind of delusion Sabina is suffering from. Regardless of how those beginning scenes play, I will giver her credit, she gets a remarkable handle on these mannerisms, reining them in as Sabina's treatment progresses and folding telltale tics into the character's everyday activity so that we are always aware of where she has progressed from.

The downside to this is that Hampton's script takes the same tack, and like Sabina, the narrative arc contracts as A Dangerous Method wears on. Or, at least, it pulls in the craziness, shying away from its darker impulses and settling on something more erudite and, sadly, more boring. A Dangerous Method is lacking a concise conflict. The love triangle, such as it is, falls open and the picture turns into a sprawling historical drama that is lacking in passionate expression. The resolution of the fight between Jung and Freud is handled via the postal service, with each letter read aloud in restrained, scholarly tones. While previously I had enjoyed the depiction of these two great minds debating the finer points of their science, I was rather bored by the particulars of their childish snit.

It's easy to see why Cronenberg was drawn to this material. Many of the ideas discussed dig into and even explain some of the themes of his earlier work, and a few of the dreams described, including one of Sabina's featuring a talking cat and a mollusk, sound like something the director might have dreamed up on the set of The Naked Lunch. Too bad this film lacks any of his macabre wit and attention to scatological details. He replaces these things with beautiful period imagery, including some wonderful shots of New York harbor in the early 1900s, but the rigorous art direction sputters under the laborious writing.

I suppose this could be a problem of poorly managed expectations. I wanted something black and crystalline, that exposed how Jung's peccadilloes and indiscretions informed his work. That stuff--and really, Sabina's issues--are all just surface dressing, and they are only skimmed across. The deeper exploration is reserved for the good doctors, and that clearly interests Hampton and, by extension, Cronenberg, more than the rest. Of what was offered, it interested me the most, as well, and perhaps we'd have all been better off if the film was exclusively focused on the analysts' extended conversations. Upon first meeting, they talked for half a day straight. My Dinner with Sigmund. Now that would have been a film! 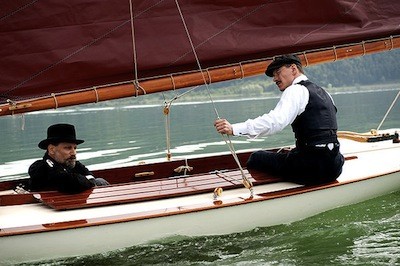