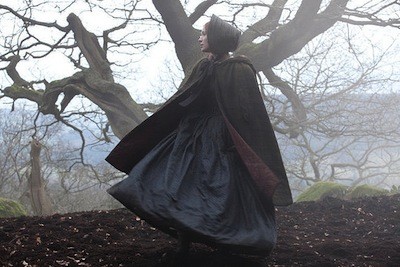 When Jane Eyre and Rochester finally have their proper introduction in the latest adaptation of Charlotte Brontë's novel, the wolfish English lord asks Jane to tell him her tale of woe. She shyly replies that she doesn't really have anything to tell, her road to this point has been an ordinary one. Hearing this, Rochester is rather put out. He's disappointed, to be sure. One could say he is also a little annoyed and maybe even bored. Brother, do I know how you feel!

There have been over twenty different versions of Jane Eyre produced for film and television since the first silent adaptation was released in 1910. I doubt that the 2011 production is the worst, but it's far from the best. You'd think with all those dry runs out there, all any contemporary filmmaker would have to do is point the camera and shout "Action!" to get it right. Not so, little one, it's apparently much easier to screw up even with all that practice.

Sin Nombre's Cary Fukunaga is the man behind this new take on the old favorite. The script is by Moira Buffini, whose work on the film adaptation of the comic book Tamara Drewe I quite liked. For this go-around, Fukunaga and Buffini go back to Brontë's text with an aim to extract all the heavy breathing and gothic mystery from its pages. The tale is the same familiar one we know, though streamlined. Young Jane, played first by Amelia Clarkson and then Mia Wasikowska (Alice in Wonderland, The Kids Are All Right), is orphaned at an early age and then exiled to a particularly horrible boarding school by her equally horrible aunt (Sally Hawkins, for all of two seconds). When Jane completes her brutal education via a rather short montage, she is assigned to be a governess at a large British estate called Thornfield. That name alone contains all the warning any girl should need: you're likely to run into a prick or two there.

Case in point, the oh so thorny Rochester (Michael Fassbender, Inglourious Basterds, The Hunger). With his rakish sideburns and angular jaw, you'd think he was totally Team Jacob, but no, this brooding Edward prototype is more the "I love you but I can't..." variety of way-too-old-for-you-young-miss heartthrobs. He pays lip service to treating Jane like an equal, but even after she saves his life from a mysterious fire, he refuses to explain what's really going on in the backrooms of his frigid homestead. Like why his bedroom burst into flame in the middle of the night. Or why he adopted the young French girl that Jane is taking care of. Or how come that dude he snuck into the house and hid in the attic ended up with a bloody neck wound. All of these are things a teenage girl should want to know, but Jane is like, "Nah, it's cool, I trust you. And when everyone else abandons you, I'll still be here pining for you."

I am kind of jumping around here, but I think you get the point. Rochester is broody and oh so dreamy, Jane is plain and a bad judge of character, and we're only a few stumbles and derailments away from the altar. Oh, and Dame Judi Dench and Jamie Bell are in the movie, too. And Jamie Bell has two sisters played by actresses named Holliday Grainger and Tamzin Merchant. I have nothing to say about them, I just really like their names. 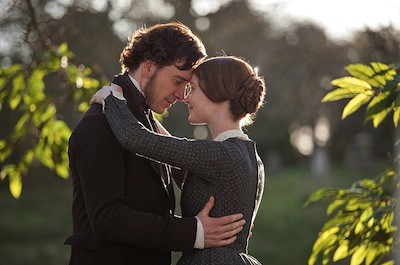 My review of Jane Eyre has taken on a more flippant tone than I had originally intended, but that's because I was really bored by Jane Eyre and it took me more than half an hour of refreshing my Twitter stream over and over to finally give in and even start typing. Forgive me for being none too eager to already relive these particular doldrums this soon (I literally only left the theatre two hours ago, the tedium is still fresh). Fukunaga and Buffini's Jane Eyre is not a god-awful abomination, but its many failings are made all the more sad by the things it got really right.

For one, the movie looks amazing. Jane Eyre was shot by Adriano Goldman (Conviction, The Year My Parents Went on Vacation), and he uses natural light to capture the gray skies of Northern England and the spooky hallways of Rochester's mansion. Night scenes are illuminated by candlelight, allowing for spectral flickering and oily shadows that envelope the late wanderers in a slick coating of gloom. Goldman is ably assisted by the sound department, who played around with the conventional theatrical speaker set-up so that whispers would appear in different corners of the cineplex, creating a moody atmosphere of haunted houses and more than a little of the ambience one generally associates with windswept moors.

In fact, what I really liked about this Jane Eyre is how much it played on the mysteries within the story. The weirder elements of Charlotte Brontë's book are cranked all the way up, and Rochester's refusal to explain what is going on only teases out the suspense. Michael Fassbender is cracking as the dark lover. He has fun with the language and is convincing as both the mean boss and the smooth seducer. I wish there were more scenes like the one I quoted in the first paragraph. I like Rochester when he's a jerk. (Oh, crap...okay, girls, I get it. Bad boys, ahoy!) Mia Wasikowska is also a very good Jane. She can do plain and mousy surprisingly well, and though there are only a few instances where the script calls for her to show pluck, she can do that, too.

The problem is, as good as those two actors are, they aren't that great together. There never seems to be much connection between Rochester and Jane, and their courtship is given short shrift. He goes from a verbally challenging rogue to a wounded animal in need of her aid in just a matter of scenes. Other seemingly important plot points are dismissed in a similar fashion. A few hints are dropped about Rochester's past as a womanizer, but they don't come to much, and Jane's rivalry with Blanche Ingram (Imogen Poots) gets such scant screen time, it's hard to tell why the filmmakers even bothered to include it. It's like Fukunaga and Buffini picked all of their favorite scenes out of the novel and arranged them into a movie with very little thought as to how the different pieces fit together.

What with all the shimmering candles and foreboding secrets, Jane Eyre should have been breathy and over-the-top; instead, the finished film is a bloodless snooze. Seriously, it's chilly in those old English houses, why not generate some heat? There's a reason the book has survived for more than 150 years, the ladies like how it gets them all hot and bothered. No one wants to pay full ticket price for a cold shower!

By the way, I took a friend to the screening who likes Jane Eyre so much, she reads it once a year. When I asked her how I should recommend the film, she said, "Tell them that they should rent it on the days when they get their period really bad and don't want to leave the house but all the copies of Titanic are already checked out." Her words, not mine. I was gonna go with a joke about how Zack Snyder should have made this so Jane could have done battle with a giant RoBOTchester, but really, her assessment gets to the point far more directly. 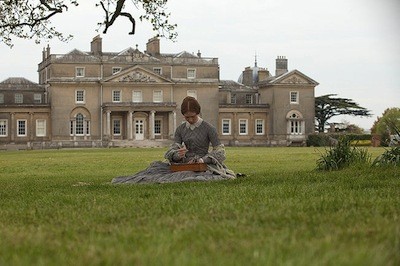