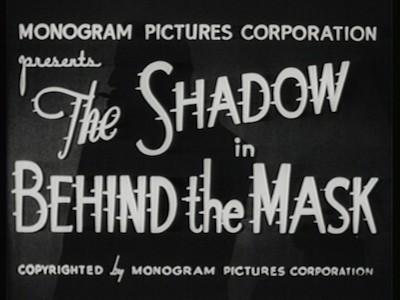 Walter Gibson's pulp avenger, the Shadow, has survived the decades and adapted well to a variety of media, leaping from prose to radio and even starring in some pretty fantastic comics through the 1980s and 1990s. The Shadow is a masked crimefighter who is secretly rich do-gooder Lamont Cranston. He has mystical powers of hypnotism at his disposal and is known for his insidious laugh. It's his trademark.

All the more weird, then, that the Shadow never laughs in Phil Karlson's 1946 movie Behind the Mask. You won't laugh either, even though for all intents and purposes it appears you're supposed to. Behind the Mask is a light comedy adaptation of the Shadow story. It stars Kane Richmond as Lamont Cranston, a rich kid who spends his nights running around in a mask as a lark. Things get semi-serious for Lamont when a blackmailing newspaper journalist (James Cardwell) is murdered, and Cranston's alter ego is framed for the crime. With the help of his jealous fiancée Margo (Barbara Read) and his goofball butler Shrevvie (George Chandler), Cranston pulls off various impossible schemes to get the reporter's marks to tip their hand. This includes Cranston picking up women of ill repute to infiltrate a blackmail ring and Margo dressing up as the Shadow and hiding under a table while investigating a murder scene. It all culminates in a stiffly staged finale where Cranston runs back and forth on a fire escape, changing between outfits so the Shadow can appear as a silhouette through a glass door panel and deliver his "I told you so's" to a bumbling police detective (Joseph Crehan).

Behind the Mask is an inept production from start to finish. George Callahan's script leans heavily toward social comedy, all but forgetting that its source material is gritty crime fiction. This would be fine if the film was actually funny, but Callahan's dull-witted dialogue is done no added favors by Karlson's plodding direction. As a comedy director, Phil Karlson (Kansas City Confidential) totally fizzles. Most of the physical gags end up being poorly staged pantomime, which the director then tries to rescue with idiotic cartoon sound effects. The actors appear bemused by the sitcom scenarios they find themselves in, but none of them are convincing as erudite socialites, much less effective amateur detectives.

But really, there's no sense quibbling over the details. Behind the Mask flops, plain and simple. As a Shadow adaptation, as a murder mystery, and as a comedy, it fails on all levels. The best thing I can say about it is that it manages to pull off the impossible and make me want to see the Alec Baldwin-led The Shadow again, just so I can see a Shadow movie that is slightly better. 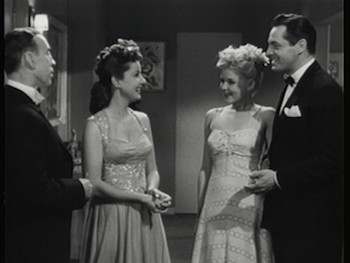 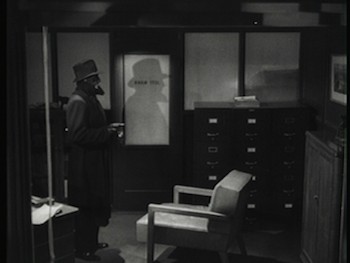 Video:
Behind the Mask is released as part of MGM's Limited Edition Collection, a manufacture-on-demand program designed for lesser-known catalogue titles. At the outset, there is a disclaimer informing viewers that the disc was made from the "best available" source materials. In some cases with other MOD discs, you wonder why they felt the need to apologize in advance; such is not the case here. The full frame 1.3 transfer is relatively poor. Resolution is hazy, there is a lot of print damage, and the tonal values on the black-and-white photography lack contrast.

Sound:
The original audio is presented in mono, and it is pretty weak, with fuzzy tones and a regular background hiss. The dialogue is all audible enough to be heard, but overall, it's an underwhelming mix.

FINAL THOUGHTS:
Skip It. Skip it as a viewer, skip it like you would a rock across a lake. Behind the Mask is a dismal misfire. If you're going to adapt an iconic pulp character like the Shadow to the movies, you might want to rethink taking "droll British comedy" as your approach. The mystery never takes off, and the comedy tanks. Avoid Behind the Mask completely. 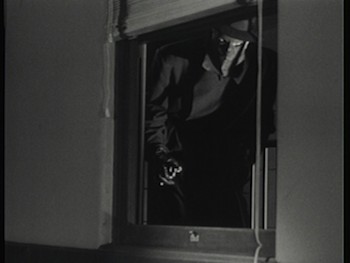 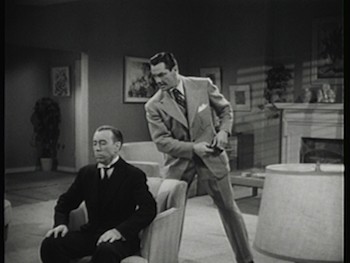