This Is Not a Movie 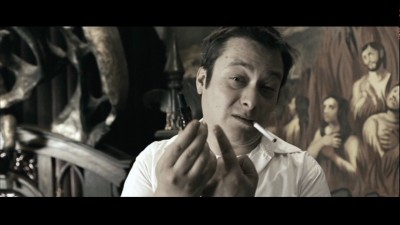 Okay, first off, I should disclose that I went into This is Not a Movie a little bit grumpy. When I put my name down for it, I wasn't paying close enough attention. I thought I was getting Jafar Panahi's This is Not a Film, which is an entirely different thing. This is Not a Film is an acclaimed Iranian cinematic experiment; This is Not a Movie is an altogether terrible psychedelic cultural satire by Mexican director Olallo Rubio. It stars Edward Furlong as three different versions of the same character, representing different aspects of his personality. By my count, that's three Edward Furlongs too many.

Actually, that's not fair. If there is one compliment I can extend to This is Not a Movie, it's that the one-time child star (Terminator 2, Pet Sematary) is actually pretty decent. He holds his own playing, presumably, the ego, Id, and super-ego of a fictional construct named Pete Nelson. With 48 hours left before doomsday (a countdown clock appears intermittently throughout the flick), Pete has locked himself in a spacious room in the Apocalypse Hotel in Las Vegas to drink himself to death. He has come to Vegas because it is the epicenter of all things dark and strange, home of atomic bomb testing and Area 51. The long-haired, cowboy-hatted version of Pete's self wants to get out of the hotel, explore Sin City, and find some girls, while the blonde-dreadlocked, hippy version tells the dueling Petes to chill. He also extends the theory that they are products of an unimaginative screenwriter's desperate flailing. Like so much in This is Not a Movie, it's meant to be a self-reflexive joke. Unfortunately, this punchline isn't funny because it's true. 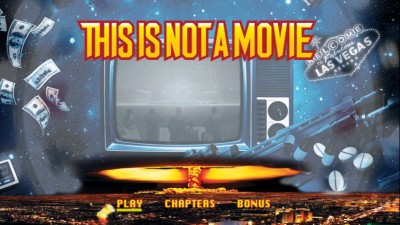 This is Not a Movie is Pete's extended argument with himself, interrupted by fake movie trailers, propaganda films, and the ghost of a friend who overdosed in Vegas years earlier (played by X-Men: First Class actor Edi Gathegi). Rubio runs through a variety of pop culture references, each one more obvious than the last--both William Burroughs and Hunter S. Thompson are mentioned in the first ten minutes--and makes the pretense that there will be some great point about cultural degradation and the human psyche on the tail end of all this jibber jabber. There isn't. The existential revelation is that the hippy is right, there really is a writer behind this, and that writer is also "The Man" (pity poor Peter Coyote). Pete is subject to another's whims and isn't really in control...or is he?! It's weirdness for the sake of weirdness masquerading as profound philosophizing.

Actually, no. To call This is Not a Movie weird is disingenuous. Rubio's film is a simulacrum of weird, a copycat approximation of what the mass public perceives as being so. This stuff isn't hard to do. You line up UFOs and devil imagery and outdated slogans and chop it up with archival newsreel footage and pictures of Nixon and layer on music by Slash (for real) and hire an actor more famous these days for his public struggles than his work and, presto, instant oddball cache! It's a cheap tactic, and it's totally dishonest. True visionary weirdness comes from creating original iconography and doing something no one else could ever conceive of. That's what all the people Rubio is ripping off did. All he's doing is gathering up their material and reorganizing it. His invented films, like Jesus Chainsaw Massacre and The System Strikes Back, are barely even parody. There is nothing in This is Not a Movie we didn't see done better and more succinctly in "Duck Amuck," that Chuck Jones-directed Daffy Duck cartoon where Daffy breaks the fourth wall to argue with his mischievous animator.

On a technical level, I suppose This is Not a Movie isn't a poorly made film. The art directing and cinematography are well executed, and Rubio plays with color filters and split-screens and constructs everything with enough skill to suggest he'd be capable of making a decent film if he had a good script. The writing is just so bad, no amount of good work can rise above it. This kind of metafictional wankery just isn't clever anymore. This is Not a Movie is the screenplay every film student writes in their third year of school to justify their adolescent self-mythologizing ("I am better than all that came before! I am punk rock!"). The difference is, all those students throw that junk away the moment they leave school and start getting a real education. Olallo Rubio never did. 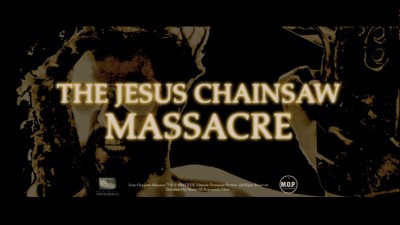 Video:
The widescreen transfer on This is Not a Movie is shown at a 2.35:1 aspect ratio and, for all intents and purposes, looks really good. Color values are excellent, and the shadows look dark without any haziness or blocking. Resolution is sharp. It's a good looking DVD.

Sound:
The stereo mix has some good kick to it, with needed emphasis given to Furlong's dialogue, which is important because it's what really drives the movie. Slash's guitar-based score comes through loud and has a lot of power behind it, but it never drowns out what is essential. 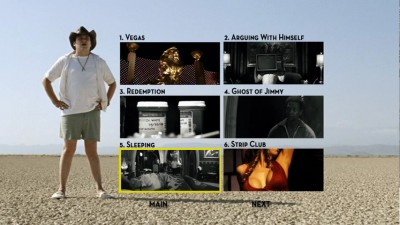 Extras:
There are a few on-disc extras, including a stills gallery and trailer. Both Peter Coyote and Slash sit down for extended interviews about the film, the actor for nearly half an hour and the musician for over 18 minutes. There are also four deleted scenes including one where Pete gets animated and goes to Hell, another where he smokes whiskey in a bong, and a sequence showing what the world might be like post-Armageddon.

FINAL THOUGHTS:
Tune out, press eject, and drop the disc in the trash. This is Not a Movie is not good, and you should not watch it. Period. Skip It. 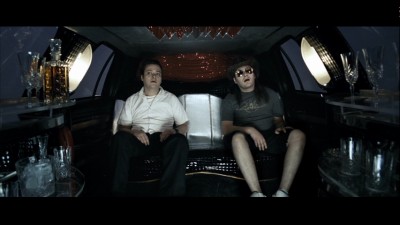