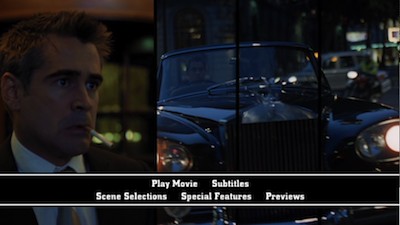 Screenwriter William Monahan, who won the Oscar for his script for Scorsese's The Departed, trades Boston accents for British ones in his directorial debut. London Boulevard. It's a whole new locale for the writer, but even if the streets may have traffic going in the opposite direction than his last crime epic, they are no less mean.

Colin Farrell stars as Mitchel, a reluctant gangster just out of prison after a three-year bid for a punch-up that went too far. Upon his release, old colleagues swarm around him, and though he is owed some favors, he tries to collect on as few of them as possible. His acquaintance Billy (Ben Chaplin) puts him up in a house taken from a doctor who defaulted on some high-interest loans. Billy also takes Mitchel out to collect on similar loans and starts showing him the ropes. Mitchel doesn't want trouble, but trouble has an annoying habit of finding him. It's partially because he is a stand-up guy in a world that doesn't really value doing the right thing. Mitchel is loyal to a fault, looking out for old cellmates (Alan Williams) and his flighty sister (Anna Friel).

He also tends to keep an eye out for the ladies, and when he stops one girl (Ophelia Lovibond) from being mugged, she informs him of a job that could be suitable for a man of his talents. Keira Knightley plays Charlotte, a reclusive model/actress who could use some added security. Mitchel never really takes the job, but he hangs around nonetheless. At the same time, the big boss wants him on the payroll. Gant (Ray Winstone) is the one bankrolling Billy's loan sharking, and he'd rather Mitchel take over than let Billy screw up anymore. Mitchel refuses, Gant persists, and Mitchel warns him he'd best back off. He'll kill Gant and take his empire. "If I were a gangster...I could not stop if I started." 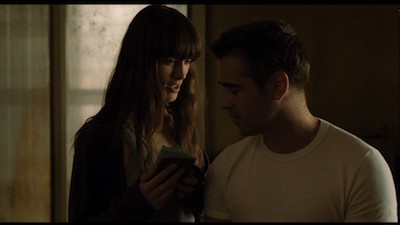 Monahan's script for London Boulevard, based on a book by Ken Bruen, is a terse, though sometimes loosely plotted, take on hardboiled cinema. There are a lot of pieces to the narrative, and not all of them fit together in obvious ways. The collision of Mitchel's two worlds is inevitable, though not necessarily predictable. It's no surprise that Gant forces Mitchel to make good on his threat, and the ensuing bloodbath moves swiftly and sharply. These sparring partners are both decisive and bold, and so are their actions.

Farrell and Winstone make a good match. They both have a smoker's gruffness to their voice, and it's easy to imagine them as two versions of the same person. Gant is what Mitchel could become if he embraces the lifestyle. It's actually some time before we see Mitchel do any killing. He's hesitant about taking a life, whereas Gant has no regard for any living thing. Both actors deliver explosive performances, a kind of movie equivalent of a Pixies song. Quiet-Loud-Quiet-Loud. The threats they make through gritted teeth are actually more frightening than the violent outbursts that are sure to follow.

Other supporting roles are filled out ably by Eddie Marsan (Happy-Go-Lucky) and David Thewlis (Naked)--the former as a crooked cop, the latter as Charlotte's assistant and companion. Thewlis in particular shows once again how good he is at bottling menace and letting it boil over at just the right moments. Anna Friel (Land of the Lost) is also quite good as the sister. Her seduction technique is dangerous: she makes you think she's sweet, even though it's quite clear she is crazy.

Monahan and editor Dody Dorn (Memento) cut London Boulevard to a selection of British rock classics by the likes of the Yardbirds and Pretty Things and vintage-sounding contemporary hits by more current acts like Kasabian. The older tunes put one in mind of '60s and '70s English crime films, the kind of snarling gangster picture that might have starred a young Michael Caine or Terence Stamp. At the same time, the gloves are off, and London Boulevard is very modern. It's violent and nasty and appropriately cynical. Mitchel is an old-school gentleman bad guy caught in a high-tech world of cash machines, cell phones, and paparazzi. His survival is contingent on him learning some new-school rules.

London Boulevard is an entertaining film, even if it falls short of greatness. It lacks that certain X-factor that would have made it more memorable. It doesn't have, for instance, the jocular point-of-view that makes Goodfellas so compelling, nor the knotted storyline of The Departed. Even so, it never drags and it delivers on all its promises, ensuring genre fans will get the requisite amount of thrills while also providing enough strong character elements to keep those looking for straight drama happy, as well. 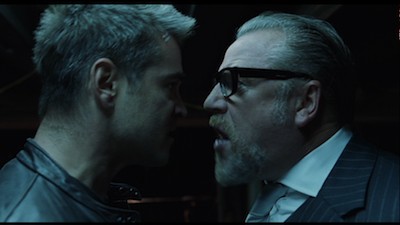 Video:
The 1.85:1 widescreen transfer looks excellent. The anamorphic image has strong colors and good blacks. I didn't notice any crushing in the frequent dark scenes, and there were no problems with interlacing or pixilation in the brighter sequences. The picture is clear throughout, without scratches or unnecessary noise.

Sound:
The 5.1 Dolby Digital audio mix is punchy with strong emphasis on dialogue and some gentle nudging during the soundtrack's choice cuts. Some of the accents can be hard to decipher here and there, but the tools are there, you just have to get the knack for it.

Two English subtitle options are provided, including one for the deaf and hearing impaired.

Extras:
A fifteen-minute making-of is included, and it features your standard talking heads detailing a little on the origins of the movie.

FINAL THOUGHTS:
London Boulevard is a solid genre effort from Departed-scribe William Monahan. Starring Colin Farrell as a rough customer looking to keep his head above water, the film ends up being an interesting character piece that delivers on both the bloodshed and the motivating factors behind it. The script is full of good turns and some strong dialogue, and the excellent cast brings it all to life perfectly. Recommended. 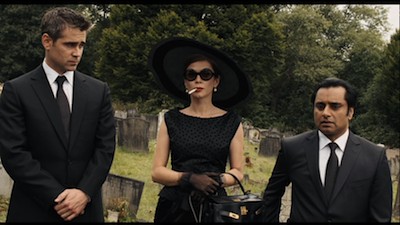