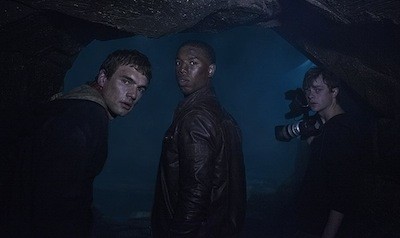 The new movie Chronicle is the latest in the "found footage" genre, joining the likes of The Blair Witch Project, Cloverfield, and the Paranormal Activity series, all movies that purport to be "documentaries" captured on people's home video cameras and, in this case, also their phones. Chronicle's wrinkle on the idea is that this is a superhero movie, but one that occurs in a world where superpowers are fiction. In other words, our own.

The plot is simple enough. Andrew (Dane DeHaan, or as I like to call him, L'il Topher Grace) is an awkward high school senior with an ailing mother and an alcoholic, abusive father. At school, he eats lunch alone and is picked on by bullies. His cousin Matt (Alex Russell) tries to help him out, but Andrew isn't very trusting. Matters aren't helped when he decides to start filming every moment of his life, to chronicle his own suffering. The red "record" light is like a signal flare to announce he's ready to get beat on more. His video camera comes in handy, however, when he and Matt, alongside the would-be-class-president Steve (Michael B. Jordan), stumble on a hole in the ground outside a rave. Something is buried in the pit, and whatever it is, it gives them telekinetic powers. They can now move objects with their minds.

The boys keep this secret to themselves. Together, they learn to harness their new abilities. They even manage to fly. One wrong thought can have serious consequences, however, and Andrew nearly kills an angry driver without even trying. He's the best with the powers, but also the most reckless. Steve tries to help Andrew use his newfound confidence to engage in life, but as Matt warns, hubris gets the better of him. In comic book terms, this Chronicle becomes the origin story of a supervillain.

Chronicle is the first feature from the writing/directing team of Max Landis and Josh Trank. Putting superpowered beings in the "real world" isn't a new idea--in fact, it's a pretty tired one--but the found footage element, when it's working, gives Chronicle a renewed freshness. That these kids are filming themselves makes sense up to a point, as the first half of Landis' script is essentially one big game of "what if?" with the teens testing their abilities and learning to control them. The simple moving of objects gives way to pranks and, eventually, survival applications. A love interest for Matt feels shoehorned in, especially since she is a blogger who films everything, too, but it serves a purpose of setting him up as the "good guy." Russell is a good actor, but he's at his best when dealing directly with the camera, assumingly improvising horsing around with the boys. When saddled with awkward teen romance dialogue, he falls flat. 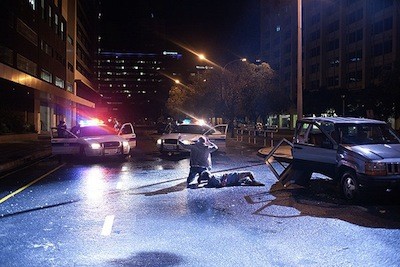 The second half of the film goes down with him. Chronicle is taken over by a pretty standard revenge plot. Tired of being pushed around, Andrew starts to fight back, and though some of his intentions are good, the consequences are very bad. There's nothing in his retaliating against his persecutors that we haven't seen before, and as much as I had my misgivings about Super, James Gunn's much darker take on the capes-and-tights genre, that film already did what Chronicle tries to do, only better.

Here is where the faux-verité does the material a disservice. There is an automatic distance between the viewer and these characters because, unlike a regular fictional feature, the camera is never erased from our perception. The audience never forgets that this is all invention. It also probably doesn't help that, by this point, Trank has gotten far less rigorous about making sure the filming is at least plausible. Early on, he comes up with a rather elegant solution for unburdening the camera: he has Andrew fly it around using his telekinesis. Once Chronicle moves into full-on special effects mayhem, Andrew has other things on his mind, and so Trank relies on our acceptance that there are cameras everywhere these days, hoping we'll assume that someone was filming the violence no matter where the brawling kids ended up. Even better, one of them will have the wherewithal to remember to zoom in for a tight close-up! It's almost like a second movie at this juncture. The first half comes off as the dirty demo that Trank and Landis made as a proof of concept; the second half would be what happened when people with money showed up and ruined it.

This makes for a rather dull mishmash. The special effects throughout are uniformly great, and it should be fun watching mutants destroy downtown Seattle, but Chronicle remains perplexingly uninvolving. It's not that I ceased caring who lived or died, I realize now that I never cared at all. That's because the brass tacks of a good superhero story aren't the pyrotechnics and the big ideas, it's the human drama underneath. Sure, it's cool to see an adolescent misfit crush a car like a tin can, but we got that in the trailer. Tricks are fine for a two-minute sizzle reel, but if you're going to kick it up to a 90-minute motion picture, you'd better have a whole lot more on the burner. 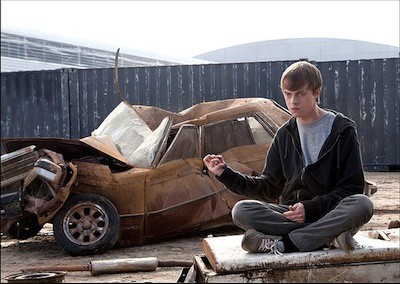