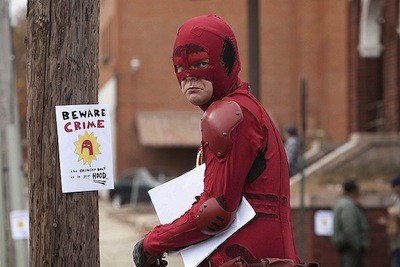 Super is one psychotic movie.

I don't say that as pejorative. I mean it kindly. The new effort from writer/director James Gunn (Slither) is a demented low-budget comedy that wears its schlock on its sleeve, right out in the open with no pretense as to what it is. Super is a comic book comedy, a vigilante revenge-film parody, a love story, and an existential parable. It's got tentacle rape, exploding body parts, and the finger of God. Also, the voice of God, as provided by Rob Zombie. Demented.

Rainn Wilson (TV's The Office) stars in Super as Frank, an average schlub with simple tastes. He likes being married to his wife (Liv Tyler) and he likes being helpful. He once pointed the way when a cop was pursuing a crook, and it felt good. So, when wifey, who is a recovering drug addict, leaves him for a pusher named Jacques (Kevin Bacon), Frank decides to take his second favorite thing to another level in order to preserve the first. Inspired by the Holy Avenger, a TV show about a Christian superhero (played with winky smarm by Nathan Fillion), and comic books featuring caped crusaders with no powers, only weapons, Frank makes a costume, dubs himself the Crimson Bolt, and starts smashing skulls with a wrench. Some of his excursions go well, and some not so much. Oh, and did I mention that most of his actions are inspired by visions that even he isn't sure are divine and not just deranged?

Gunn is going gonzo with the "superhero in the real world" idea, which despite the appearance of guys like Phoenix Jones to play freakshow on the evening news in our reality, has actually run its course in comic books already. Most of these stories usually go the way of Kick-Ass: for as "normal" as the characters are intended to be when the whole thing starts out, the narrative veers into the fantastic by the end. Not so here. The Crimson Bolt gets shot, he nearly quits, he draws negative attention from the police, and his life is genuinely in jeopardy. Rainn Wilson is a great buffoon, and here his shtick works because he's so earnest about his mission. Frank is a do-gooder through and through. Even if he is misguided and has anger-management issues, he tries to do the right thing. Hell, when his superhero sidekick, Boltie--Ellen Page in the lady version of a Robin costume--throws herself at him, he refuses because diddling one's sidekick is inappropriate and also, he's still married. Forget that his wife is shacking up with her drug dealer, he made a commitment. 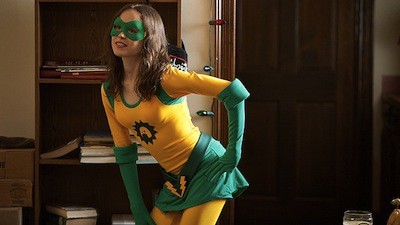 Just like in Kick-Ass, the costumed girl who teams up with the inept boy ends up stealing the movie. Page is hilarious as Libby. She is the smart-mouthed girl at the comic book store who helps Frank pick the right comics, and she's the first one to figure out he's the Crimson Bolt. She pushes her way into being his partner, and takes to the task of pounding people's faces in with youthful abandon. Page really gives it everything she's got, hooting and hollering and making fun of the ludicrous poses from cheesecake comics. I've known more than one girl who was into comics who would shriek with as much delight as Libby at the prospect of getting her own Wolverine claws. (Though, nerd alert, her claws are really more like X-23.) You've got to give it to Gunn for knowing all the different sides of his potential audience. Though it's arguable to what level he really is pushing said audience. Is he challenging our bloodthirsty expectations, or giving us exactly what we want, by going all the way with the gore? Or is he doing neither, and this is just one big goof?

Super is an unapologetic B-movie. It revels in its blood and guts, it likes to swear, it's got terrible taste in music, and it's pretty serious about not getting too serious. Gunn uses real locations to turn his budget constraints into an effective reinforcement of his film's invented reality. Frank lives in a crappy part of town, and so shooting in a crappy part of town only makes sense. Like its main character's rapidly deteriorating mental state, the insanity grows from scene to scene, ending in a violent bloodbath that, shockingly, has real consequences, good and bad. There are times when the movie could have maybe used a little more zip, or perhaps further refinement in the writing, but these ultimately don't matter. In terms of cinematic pratfalls, Super is definitely a big case of "I meant to do that," and it's hard not to smile and say, "Yeah, I bet you did." 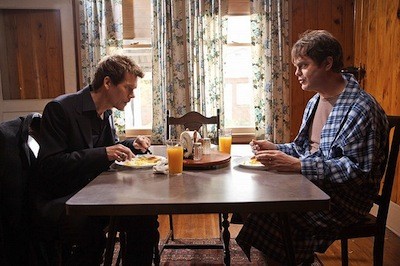