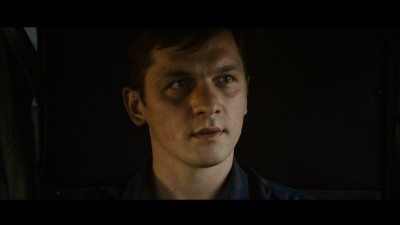 Like all great parables, Russian director Sergei Loznitsa's My Joy is simple, but its meaning is so complex that it may take many tellings (or, in this case, viewings) for it to fully sink in. The film is set in the Russia of the here and now, long after the Berlin Wall came down, but Loznitsa (who is making his narrative-feature debut but is an experienced and accomplished documentarian) peels away his country's fragile veneer of post-communist, gangster-capitalist amnesia to reveal a land whose cultural, political, and social soil has soaked in Tolstoy and Dostoyevsky, Trotsky and Stalin, Eisenstein and Tarkovsky and continues to produce accordingly. The chaotically capitalist, faltering Russia of today often seems dead set on replicating the American idea that the pessimistic past is to be thrown away and optimistic history begun anew with every turn in the road; Loznitsa begs to differ, depicting a world in which the everything's-okay present can only appear foolish, impotent, and ignorant in the face of a looming, monstrous history that seeps invisibly into everything and cruelly erodes all blissful ignorance.

My Joy's principal specimen of the newly industrious/prosperous Russian middle class is Georgy (Viktor Nemets), a truck driver who lives in the suburbs with his girlfriend or wife (we barely see her, and the strong impression is that Georgy doesn't, either). Once Georgy's latest run (he's delivering flour) takes him out of the newly affluent zone of comfort, however, what's really going on - the real conditions of his fellow citizens - is sharply evident, and his mundane journey becomes an odyssey down through the social strata and back through bygone decades as he encounters disgruntled, abusive police authority that bears a suggestive resemblance to the Soviet repression of yesteryear; a child prostitute working a rural highway traffic, who tells him there's no work and no friends here; and a ragged, hitchhiking World War II veteran whose war story - played out onscreen in parallel-action flashbacks we cut to abruptly, conjoining past and present - tells of the miserable, looting, backstabbing, murderous post-victory reality among the ranks as they came back home. That ingenious cutting (initially confusing but all the more effective for that, keeping us on our toes) invites us to consider whether things have really changed so significantly in the meantime, especially in light of what happens to Georgy after he philanthropically takes the much-too-young hooker back to her village in a misguided gesture of bourgeois charity. 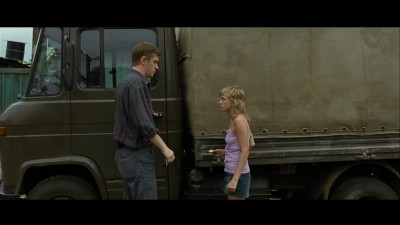 After being promptly chewed out by the toughened youngster (who, before stomping off once more to the highway, demands of Georgy whether he'll support her and her mother, since he seems so intent on diverting her from the available livelihood), Georgy gets lost on the dirt roads crisscrossing the countryside and is left for dead after being accosted by robbers. When we next see him (after some unspecified amount of time has passed), he's become a bearded, bedraggled mute, a sort of silent village idiot housed and used sexually by the woman that apparently found and "rescued" him, who sends him to the market with her son to sell the flour she's stealing from the truck, which she also plans to sell for cash as soon as possible. Georgy's existence as an amnesiac somnambulist is a cavalcade of escalating indignities and horrors whose violent, terrifying conclusion (paced, as is much of the film, with a real-time slowness that equates, here, to dread) vividly demonstrates that the hideous emptiness of blank forgetfulness becomes even worse as it inevitably culminates in a continuation of the cycle whose awfulness made one want to seek ignorant bliss in the first place. 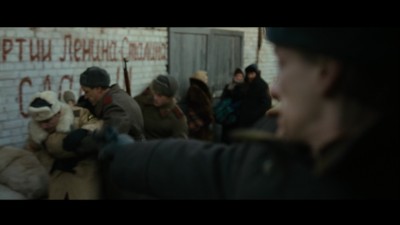 There is no putting into words the particular, abruptly digressive yet always allusively connected way in which Loznitsa encompasses so many of the binaries (a high compliment to the film, which is an experience literally as indescribable and indelible as a nightmare) between which his nation, as he sees it, comprises a vast gray zone, giving the lie to any belief that one option could ever hope to cancel the errors of the other: urban/rural, past/present, pride/shame, communist/capitalist, assertive/submissive, they're all here, vivid and irreducible, pulling our good-natured, hapless protagonist back and forth between them until he tears. Suffice it to say that the film, the allegorical prologue of which depicts a young man's dead body unceremoniously dumped into a muddy ditch and covered over with dirt efficiently moved by industrialist machinery, draws heavily upon an eye for impressionistic beauty for which his documentary experience (e.g., the haunting Portrait) has trained Loznitsa so well. Its meaning is discernible less through dialogue (of which there's much less than typical, expository or not) or cause-and-effect plot than via the tone that the director, with the indispensable aid of the amazing cinematographer Oleg Mutu (4 Months, 3 Weeks, and 2 Days) creates through the very fine performance he gets from Nemets and the rest of the cast, and his mastery of the composition, mise-en-scène, and movement within the lengthy single take; whether it's a traveling or still shot, there's a restrained but distinctive beauty in every frame that lends immeasurably to the impact of the whole. 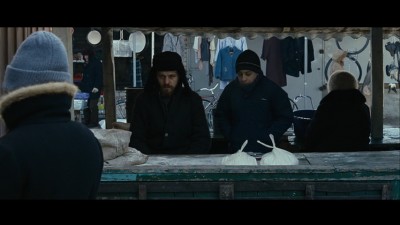 My Joy shares a theme with Béla Tarr's 1994 opus Sátántangó, or rather, it poses a common question: After a community, a people, a nation have been thoroughly disillusioned with failed communist utopia, and the terrible realization begins to dawn that reflexive capitalist deregulation mainly just entices the vultures out of the woodwork, what options, if any, are left? It cannot, of course, reach the heights of Tarr's masterpiece, but it explores that theme through its own point of view and with its own style in a bracing, unpredictable way, proving, along with other cinematic high points like Tarr's film and the New Romanian Cinema, that the storms of history and the residual political, philosophical, and cultural ambivalence that challenge the postcommunist part of the world is also extremely fertile artistic ground that seems to have produced no shortage of provocative, intelligent, and creative native sons eager to till it. It also marks director Sergei Loznitsa, already deservedly acclaimed as a maker of wonderfully impressionistic documentaries, as a film artist to admire and keep track of; it was an agonizingly long wait for My Joy (released in Europe in 2010) to reach our shores, and it's more than enough motivation to keep our fingers crossed that the U.S. distribution powers that be will get his currently-in-production followup, In the Fog, to us much sooner. 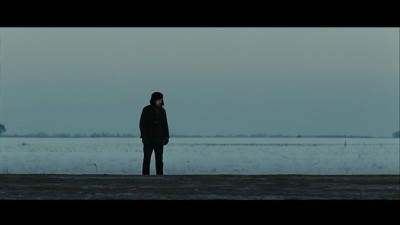 
Unfortunately, the DVD presentation of My Joy (in the original aspect ratio of 2.35:1--contra IMDB's indication of 1.85:1, but confirmed by Loznitsa's own website--and anamorphic/enhanced for widescreen TVs) visually ranges from passable to rather poor. In general, the constant but low-grade aliasing, blurring, and other noticeable artifacting are not terminally distracting. At its worst, however, this transfer has some of the most blatant edge enhancement I have ever seen. The film's visual brilliance is still evident, and for a film this interesting and important, we'll take what we can get; still, one has the bitter suspicion that that's exactly what the film's home-media distributors are counting on when they cheap out on giving it a decent transfer, and My Joy deserved better treatment than this.


The disc's Dolby Digital 2.0 stereo soundtrack (in Russian with burned-in/non-optional English subtitles) is very good, capturing all the important nuances in the film's score-less but naturalistically vibrant and multifaceted soundscape.


Nothing much at all: just the film's theatrical trailer and a small stills gallery along with a couple of additional trailers for other Kino Lorber releases.


Sergei Loznitsa's My Joy, a modern Russian parable delving into the horrors of complacency and amnesia (whether political/cultural or personal), is a film that's both enigmatic and bleak to its very core; if you insist upon optimism, happy endings, "likeable" characters, and/or a "realistically," explicitly linear/cause-and-effect plot, you will surely flee. But those who derive pleasure from experiencing a work of art that aims for and achieves profundity and beauty will find it positively elating. The film is made with a rare vision, intelligence, and rigor, as well as astounding technical, photographic, and performative suppleness, all brought together under the umbrella of Loznitsa's remarkable cinematic sensibility, his deep and meticulous understanding of how events can be depicted visually for maximum evocation and emotion. Harrowing as it is, My Joy is edifying and encouraging for its sheer, uniquely cinematic power, a life-affirming celebration of the art for anyone convinced (or who wants to be persuaded) that a movie can attain all the greatness of a well-honed poem or perception-altering painting. Highly Recommended.