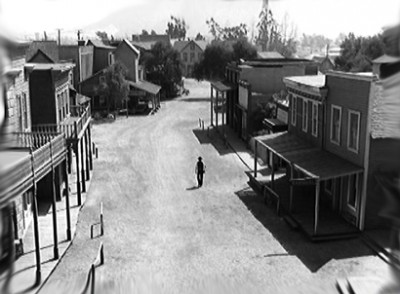 Please Note: The images used here are taken from promotional materials and a prior review of the Blu-ray by DVD Savant, not the Blu-ray disc under review.

More gripping, succinct, and troubling than almost any picture made in the Hollywood studios' golden age, Fred Zinnemann's 1952 Western High Noon is a starker, more thoughtful example of the genre than many of its other (and arguably even better) masterpieces. Screenwriter Carl Foreman (The Bridge on the River Kwai) has crafted a sort of stark, relentless parable about loyalty, responsibility, principle, and love amid a state of siege and crisis, when the stakes are very high and all of those vital things one takes for granted are put to the severest test. That's not to say, though, that the film sacrifices one iota of its enthralling suspense to make its philosophical investigations or pose its moral questions: Foreman, in the writing, and director Fred Zinnemann (From Here to Eternity, Julia), in the shooting, have placed all of their faith in the idea that such a deep level of intellectual and emotional engagement are best obtained through the sort of muscularly swift, economical storytelling available uniquely to the cinema; their expert wielding of the seventh art's tools and materials hones something like a textbook example of the power of brevity -- a phenomenally effective movie without an ounce of fat on it.

The first few scenes lay the groundwork for the narrative ticking time bomb of the simple, potent plot: In the formerly Wild, now civilized Western town of Hadleyville, NM, marshal Miles Kane (an aptly taciturn Gary Cooper) is marrying his fetching, goodhearted young bride, Amy (Grace Kelly, in her first major role), and very reluctantly turning in his tin star to retire into wedded bliss. Meanwhile, storm clouds have gathered already, under the opening credits, with three scofflaws having arrived just outside of town, near the train station, where they plan to await the arrival of their ringleader, a condemned-but-pardoned former Hadleyvillian called Frank Miller, on the noon train before they begin wreaking havoc, with Miller's primary goal being vengeance on Mr. Kane, who was the one that sent him to the gallows while in the process, years earlier, of making Hadleyville a place where women and children could feel safe. When news of his arch-enemy's impending high-noon arrival reaches Kane, he defies his pledge to Amy (a Quaker and therefore a pacifist by religious principle) and put that tin star back on? After initially taking the advice of well-meaning friends, leaving Hadleyville behind for his own safety and by reasonable rights, Kane's craggy integrity insists that he return to take responsibility for the threat to the town, and the film revs into high gear, swerving into not precisely real time but a neatly pulled-off, nail-biting simulation thereof as Kane and the town prepare for the arrival of their would-be destructors. 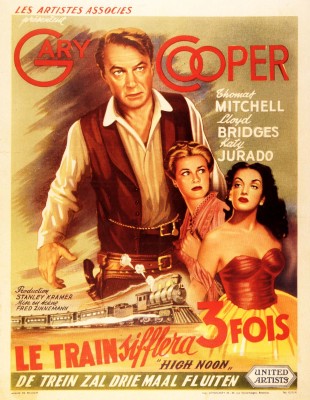 Piling suspense on top of suspense, the film's uncertainties multiply: From the beginning, we (like Kane's poor wife) fear for his safety, and we are as uncertain as they about whether their love will ultimately survive his decision. Added on to that is the divided loyalty of Kanes's ambitious deputy, Harvey (Lloyd Bridges), whose envy of his boss's stature and standing have led him to take up with Kane's former flame, the tough and wise shopkeeper/apparent former prostitute Helen (Katy Jurado), and whose deep-seated ambivalence about helping Kane is only the first in a series of disappointing and discouraging demurrals and refusals. These include, of course, the low, greedy/craven motivations of a taunting hotel owner whose business suffered after Kane cleaned up Hadleyville, and the judge who sent Miller away, and is now hastily leaving town and advising Kane to do the same, out of sheer careerism. But underlying cinematographer Floyd Crosby's excellent black and white cinematography is plenty of grey to keep the film from feeling predesignated or self-righteous: There are also the more understandable reluctance of the town pastor (who cites "thou shalt not kill") during a wrenching scene where Kane tries to recruit deputies from the congregation, the genuine well-wishers who wish Kane the best, and one man who eagerly volunteers at first only to back off when he realizes a posse is unlikely to be forthcoming, he and Kane will face four armed men on their own, and he begins to think of his wife and children. Will this noble, beleaguered man, friend and protector to all, be left to fend for himself, ultimately abandoned by everyone from wife to friends to enemies? (In the wife's case, it's ultimately no; in what is perhaps the film's most harrowing scene, her pacifist convictions shatter, painfully and devastatingly, into shards of glass.) 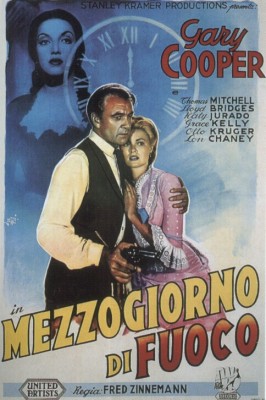 Throughout all the mounting uncertainty, the clock is ticking, and Zinnemann (along with crack editors Elmo Williams and Harry Gerstad) make you feel every ominous swing of the pendulum. The sheer, swift elegance of the film's images and rhythms are, I would say, owed the bulk of the credit for how unstoppably involving it is: Clock faces are persistently inserted as cut-ins like staccato punctuation for the story's unfolding and the horror's drawing ever nearer, pushing the anticipatory fear around the inevitable climactic confrontation to the breaking point. (Subtly but brilliantly, the clock-face close-ups get tighter and tighter as the story advances.) The evocativeness of the images Zinnemann and Crosby create are enough for an entire essay dedicated to singing the praises of their spartan aptness and acuity, but highlights include one of the greatest crane shots of all time as the camera pulls back for an extremely wide high-angle view of Kane in the middle of Main Street, until he becomes a lone dot surrounded by a town whose pitilessness can be sensed through how bare and deserted it's become in the face of danger. Whether through deft movements and cutting (a pan from Kane's face up to the clock he's checking, an unobtrusive cut, and a pan down to the also clockwatching Amy elsewhere most elegantly connects their separate but concurrent awareness that time is growing short) or perfect stasis (a recurring, perfectly composed low-angle shot from the POV of railway tracks -- which, I'm convinced, Paul Thomas Anderson borrowed for one of There Will Be Blood's more memorably abrupt transitions -- from which the tracks stretch off from immediately in front of our eyes into vast desert and sky, is returned to repeatedly, accruing additional nightmare dread every time as we further comprehend the doom that will appear on this horizon, zooming implacably down those tracks and right at us), Zinnemann, Crosby, and Williams/Gerstad create an experience as tightly wound, meticulously calibrated, and lovely to behold as a fine watch (an apt metaphor).

The final perfectly-deployed touch is Dimitri Tiomkin's (Red River, Duel in the Sun) score, which tense and startling, judiciously recruited at the right moments so as not to dilute its power, and topped off by the film's eponymous theme ballad, composed by Tiomkin and mournfully sung by Tex Ritter. That song is the first sound we hear, first very prominently over the opening credits, then recurring again and again throughout, much lower, under the action, so that its slowly clip-clopping percussive rhythm and Ritter's baritone sadness feel for all the world like Kane's very heartbeat and inner thoughts/longings, without ever once being obvious about it. The song and its ingenious integration is only one among the many, near-ceaseless refractions of the inspiration, skill, and restraint that make this picture so consistently thought-provoking, moving, and riveting. The wordless, devastating, indelible gesture that closes the film only lasts about two seconds, but we've been primed for that sort of compact, concentratedly powerful moment by all the streamlined, perpetually escalating potency that has preceded it: High Noon is a tour-de-force of maximized minimalism that, 60 years after it first appeared, still roars down the track with every bit of its galvanizing cinematic force intact. 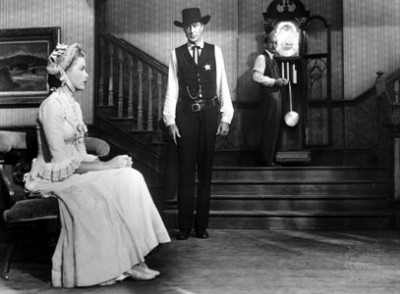 
The AVC/MPEG-4, 1080p transfer, presenting High Noon at its original theatrical aspect ratio of 1.37:1, is quite good. There may be the tiniest hints of edge enhancement if you squint your eyes, but otherwise, the varying levels and contrasts of the blacks and whites in Floyd Crosby's cinematography look ultra-solid, widely variegated, vivid, and gorgeous, while the fine celluloid grain noticeable throughout sufficiently conjures the texture of a cinematic experience despite a possible slight overuse of digital noise reduction (DNR).


The very fine DTS-HD Master Audio soundtrack preserves the film's original mono sound to its fullest extent, with no audio defects or limitations other the innate ones imposed by the audio recording technology of the time. Everything sounds clear and rich as can be, from dialogue to gunfire to Dimitri Tiomkin's score and the frequently, subtly heard title song.


--"The Making of High Noon," a 22-minute 1992 short hosted by Leonard Maltin and containing both archival and (then) new interviews with cast and crew. Some of it is just Maltin overstating the film's obvious qualities, but for the most part, it offers many a genuine insight into the film and its making, with lots of technical details about just how the film was prepared, cast, and attained its precision and simplicity (storyboards, for one thing, which was a relatively uncommon practice then). There are many recollections by Lloyd Bridges, director Zinnemann, and producer Kramer about the preparation/shoot, what it was like to work with Gary Cooper, and, perhaps most fascinatingly, the taint of McCarthyist Communist-witch-hunt blacklist on the film (yes, unbelievably, there were those who branded it "un-American" because of screenwriter Carl Foreman's refusal to cooperate with the House Un-American Activities Committee interrogations), which Bridges estimates kept him out of work for several years, and which singer/musician David Crosby (son of director of photography Floyd Crosby) is certain cost his father what should have been a much more glorious career. 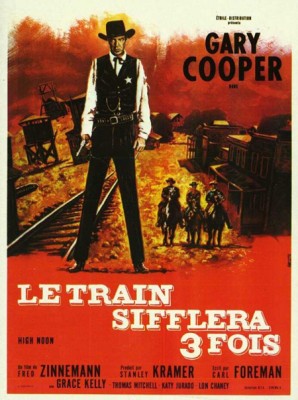 
High Noon belongs in the very good company of those select few other Hollywood films -- 12 Angry Men, Bad Day at Black Rock, etc. -- that blended, without a hitch, moral and philosophical urgency into sheer, transfixing suspense, conveying all of it with bold structural and stylistic moves for storytelling that feels innovative and very dynamic, but never gimmicky. Every frame is another tick of the clock towards the deadline announced in the title, and every moment is rife with a sharp, relentless visual panache and memorably tortured performances, particularly from Gary Cooper, who doesn't express much verbally but physically bears the fullest brunt of the film's day of reckoning (his hair is just a sweat-mop by the end), and whose character becomes an exemplary avatar of bitter-end adherence to principle and loyalty. Amazingly, High Noon also finds room in its relentless, honed-down brevity to explore, without taking detours, both the moral failures and the true gray areas and exceptions of a Western town that, for one reason or another, is unwilling or unable to aid the hero to whom they owe so much as he's forced to take the final stand in his righteous cause. The film is a breathtaking, exhilarating but unsettling experience, a juggernaut of moral and mortal suspense, and a very worthy addition (looking finer by far than it ever has on video in this new re-release edition) to the Hollywood-classics section of anyone's Blu-ray library. Highly Recommended.