Please Note: The stills used here are taken from the bonus DVD included in the package and not the Blu-ray edition under review. 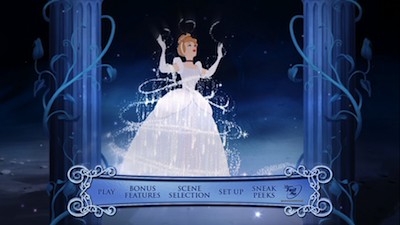 Everyone knows the story of Cinderella, the scullery maid tortured by her stepmother and her wicked stepsisters, forced to work day and night in their service since Cinderella's father passed away. When the King throws a ball for his handsome son to find a wife and decrees that all eligible women in the kingdom attend, Cinderella sees her chance to get out and have some fun. This is not something her evil family will allow, however; nor does Cinderella have the proper clothes. Only with the intervention of a fairy godmother can the young woman go to the ball. The sorceress conjures a gown and turns a pumpkin into a horse-drawn coach, and she sends Cinderella on her way with one proviso: be home by midnight before the magic wears off. Cinderella barely pulls this off, and as the smitten Prince chases after her, she loses her glass slipper. The lovelorn monarch then seeks his fair maiden, swearing he will marry the women whose foot fits in the shoe.


Everyone knows the story of Cinderella, and this is both a blessing and a curse when it comes to making a movie version of the tale, something which Walt Disney's 1950 animated feature attempts to reconcile. Cinderella is maybe somewhat slight amongst the studio's classics, yet it still manages to charm and entertain. It's a fairly impressive effort when you consider the hurdles the animators must have faced. Suspense is a little difficult to muster when the audience knows exactly how your film is going to turn out. To compensate, Disney surrounds his heroine with a lively supporting cast. There's the comic relief (the mice), the villains (the cat Lucifer, and the hideous stepsisters), and there is the kindly Fairy Godmother, who brings levity and wisdom to the narrative. Additionally, there is also the romantic King, who only seems funnier the older I get. He dreams of having grandkids and can't understand his rebellious, too-practical son, who insists on doing things his own way. I never really noticed before, but the Prince is barely in this thing. I think he gets less than five lines. He's not very interesting anyway. The throne's foppish minister of state goes on the hunt for the lost Princess instead.


Cinderella herself isn't that interesting either. This seems to be a calculated move. From a writing standpoint, it makes sense to have her be sugary and nice. She is a walking object lesson in turning the other cheek, even going so far as to discourage the dog from chasing the cat. Her very blandness counters the cruelty visited upon her. If she were more real, the punishments she endures would be harder to take. Instead, she is a longsuffering saint rewarded for her perseverance. 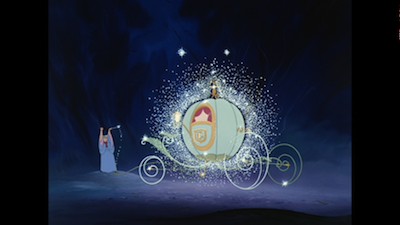 What really shines through in Cinderella, even above the story, is the design and the top-notch animation. This was Disney's return to full-length cartooning after post-War cutbacks, and though there are times when a lower level of detail suggests maybe the artists were a little rusty, the overall look of the motion picture is quite nice. Backgrounds are colorful and the clever animal designs lend themselves well to slapstick. The choice to lean toward the realistic with the stepmother, giving her harsh wrinkles and sharp features, adds to her evilness, while the more rotund King is easier to love for his fatherly appearance. There is actually quite a bit of symmetry throughout the movie, be it repeated actions (Cinderella loses her shoe at home, foreshadowing the lost glass slipper) or the way certain characters mirror others. The King and his man are really human versions of the mice Gus Gus and Jaq. Ever notice how both the chubby rodent and the portly King almost fall off the balcony because of their desire to go to Cinderella?


The best sequence here is definitely the preparation for the ball. The magic of the Fairy Godmother is appropriately enchanting, and she also gets the best song, "Bibbidi-Bobbidi-Boo." If Cinderella stumbles, it's just that, try as they might, the storytelling team can't give the ending the extra pizzazz required to really push this one over the top. Then again, maybe it's not so bad for true love to be a foregone conclusion. Good ol' dependable Cinderella, you can always count on her! 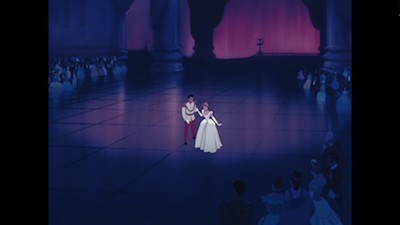 
As is to be expected, Cinderella's high-definition upgrade is a knockout: a 1080p/AVC-MPEG 4 encode, shown in the classic 1.33:1 aspect ratio. The image quality is remarkable, with bright clarity and razor-sharp resolution. Every scene looks fresh and brand new, and while some might quibble over how smooth the picture is, it's really quite astonishing to see these classic Disney features looking so vibrant. Colors are wonderful, and there is no macroblocking, ghosting, or jagged edges. Maybe a little texture might have helped, particularly as flaws in the original animation are revealed, but that's just nitpicking. (The screengrabs here really don't do the Blu-Ray justice, since they are from the DVD, which is significantly downgraded from the high-def.)


There are quite a few sound options here, including a 7.1 DTS-HD Master Audio track that is lively and full of nice interspeaker effects. Purists might want to choose the more centered theatrical version, but I like what Disney does with their upgrades. Sound has power!


Alternate audio choices are both French and Spanish mixed in 5.1.


Subtitles for the deaf and hearing impaired are available, as well as options in French and Spanish.


Disney does their usual fine packaging job, putting both the Blu-Ray and DVD in one slim case with an embossed slipcover. Paper inserts include advertisements and a guide to the Blu-Ray.


In terms of bonus features exclusive to this collection, there are many. The best in terms of shedding some light on the production of Cinderella is the 12-minute "The Real Fairy Godmother," a tribute to Walt's wife, who provided inspiration for the character in the movie when the bossman felt the production team wasn't getting it quite right. It includes an interview with their daughter Diane Disney Miller, who also recorded an optional video introduction to Cinderella. You get lots of good peeks at production art in this one. There is also a very short storyboard reel showing an alternate opening to the movie.


Two more featurettes are more promotional in nature. Ginnfer Goodwin (Once Upon a Time, which is on ABC, a wholly owned subsidiary of MouseCorp) hosts an 8-minute video looking at the new Princess focus of the Fantasyland portion of Disneyland, and it's appropriately called "Behind the Magic: A New Disney Princess Fantasyland." The 10-minute "The Magic of a Glass Slipper: A Cinderella Story" is a surprisingly charming and whimsical movie starring designer Christian Louboutin, who created a special limited line of slippers for Disney (which were used as giveaways to promote this release; did you get one, fella?).


The short film Tangled Ever After, starring characters from Tangled, is a pretty funny slapstick lead-in to the main feature. Folks who saw the theatrical re-release of Beauty and the Beast in 3D would have also seen this cartoon, as it was the in-theatre bonus. (This short subject is also on the extra DVD, along with "Behind the Magic.") 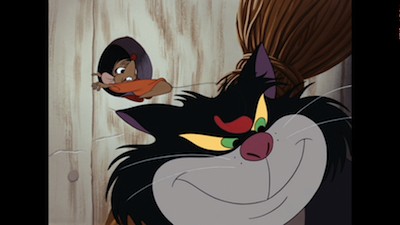 Special Blu-Ray features include the DisneyView option, which fills the black bars on either side of the film image with new background paintings by contemporary Disney artist Cristy Maltese, giving you a sort of tapestry feel and making your TV all pretty-like (thought I eventually turned it off, because it was kind of distracting how often the picture changed). Disappointingly, the interactive Disney Second Screen, in which you use your mobile device or computer to get extras while watching the main movie, doesn't have the inside-the-vault content of other Disney discs, instead giving an interactive storybook and games geared at young kids. The storybook is activated when the movie is in play and you have the downloadable app on your device turned on.


All of the new features are in HD.


For those curious about the older features from the jam-packed DVD editions of Cinderella, never fear, there is over two hours of content ported over in the Classic Backstage Disney section. This includes two deleted scenes, "The Cinderella Work Song" and "Dancing on a Cloud" (shown via storyboards), half an hour of music and audio promos, and a whole bunch of featurettes, including the 40-minute "From Rags to Riches: The Making of Cinderella," tributes to the Nine Old Men and Mary Blair, a documentary on some alternate ideas for how to bring this fairy tale to the screen, some storyboard comparisons, a 1922 version of Cinderella, and an excerpt from a 1950s "Mickey Mouse Club." All of these are in standard definition.


Naturally, there are a ton of trailers, commercials, and promos. This is a Disney disc, after all! Buy, kids, buy! Consume, consume, consume!


DVD Talk Collector Series. For any other studio, Cinderella would be an unqualified success, for Disney, she is the nice sister amongst a lot of rambunctious, attention-grabbing siblings. Which is kind of fitting, that is how Cinderella is herself. The film is funny, smartly structured, and animated excellently, all things that allow this Cinderella to overcome the overly familiar story. It still lacks the memorable oomph of a more spectacular finish, but you can't have everything. As is becoming the norm, Disney has given their classic a fresh scrubbing and the high-definition transfer looks great. There are also a ton of extras here, loading up fans of the cartoon with a bounty of good stuff to enjoy. If you collect Disney features, you're going to want to upgrade to the "Diamond Edition." If you don't collect Disney, (a) I don't know why you read this far, and (b) you're a joyless human being and I don't wish to know you. I said, good day, sir! 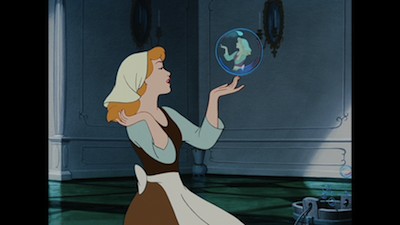