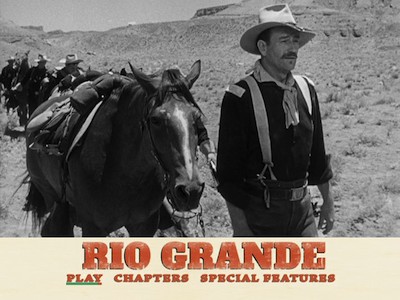 It's hard to imagine now, but apparently John Ford had to bargain with Republic Pictures to get a greenlight for The Quiet Man. Thinking that the romantic movie starring John Wayne and Maureen O'Hara would be a box office tanker, they convinced Ford to first make a more traditional western with the stars in order to balance out their losses. The result of that pact was Rio Grande, and that this film is maybe lost next to its more popular follow-up is only because The Quiet Manis so great. Set aside its origins, and Rio Grande is a damn fine movie unto itself.

The Duke stars as Lt. Colonel Kirby Yorke, a decorated soldier in the U.S. Cavalry. Kirby runs a camp out west, deep within Apache territory. He is a guy who likes to get things done, but he's regularly held back by the rules of engagement. Any Indians his men get into a skirmish with need only cross the Rio Grande to the Mexican side of the water, and the Cavalry can't pursue. This makes for a dangerous outpost, and despite misgivings when his son shows up amidst the new recruits, Kirby is by-the-book and has to respect the orders given. He hasn't seen Jeff (Claude Jarman, Jr.) for fifteen years, and the boy has only ended up in this regiment because he flunked out of West Point and could not join the regular army. Unsurprisingly, he has arrived with something to prove.

And arriving shortly thereafter is Jeff's mother and Kirby's estranged wife, Kathleen (O'Hara). She wants Jeff to come home and is prepared to buy his way out of active duty. Neither Kirby nor Jeff will comply with this, but having Kathleen around stirs up old feelings. There is still love in the Yorke marriage that more than a decade apart hasn't diminished, they just have to remember how to get along. You'd think taking the time to focus on the tender moments would be difficult when all the nearby tribes team-up to lead a concentrated attack on Kirby's base, but then, you don't know the Duke.

Rio Grande dates from 1950, and it was written by James Kevin McGuinness, who wrote Ford's The Battle of Midway, and based on a short story by James Warner Bellah, whose stories were also the source material for Fort Apache and She Wore a Yellow Ribbon. Together, the two men craft a surprisingly tight frontier tale, balancing a healthy cast of supporting characters and even weaving in an extra subplot that ends up having an effect on the main action. Ben Johnson (The Wild Bunch) plays a Texan trooper wanted back home for the murder of a visiting Yankee. His hiding from the law runs through the whole of Rio Grande, building to a heroic redemption in the final act.

Anyone back in the day who still had pause about seeing John Wayne and Maureen O'Hara in a more standard romantic picture should have had any doubts erased after seeing them in Rio Grande. The pair work well together, and it's neat to see Wayne playing his role so gently. He displays a genuine shyness in his scenes with her, and despite the actor's image as being such a legendary tough guy, he's equally as convincing when playing nervous and unsure. O'Hara proves a good match for him. She has enough presence that even if Wayne were to go more aggressive with the role, she'd not be bulldozered by him.

There are clear signs that Ford was playing it a trifle safe in Rio Grande. Humorous asides with Victor McClaglen (who would play Red in The Quiet Man) and the presence of multiple breaks for some singing (mostly performed by Sons of the Pioneers) make it seem like Rio Grande was designed to have a little something for everyone. Yet, Ford manages to keep any of the extraneous bits from being superfluous. The songs and the lovemaking fit right in with the predictably well-choreographed horse- and gunplay. Cinematographer Bert Glennon also makes great use of the wide-open spaces in the Utah desert, giving us some of those breathtaking American vistas audiences expect from a John Ford picture. So, regardless of your poison, this Western has plenty to enjoy. 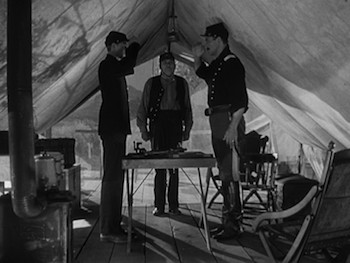 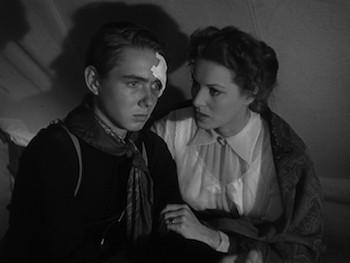 Video:
Rio Grande was shot in black-and-white and is shown in a full-frame aspect ratio. The print used by Olive Pictures is in excellent shape, with no real damage to the film and very little by way of spotting or scratching. The lights and darks have strong contrast, and the resolution overall is sharply rendered.

Sound:
The original soundtrack is mixed in mono and sounds clear as a bell. Dialogue is crisp, and sound effects have the intended impact. The music has some nice swells, as well.

Extras:
In addition to the theatrical trailer, there is a "The Making of Rio Grande" featurette that was also available on the Artisan DVD release from 2002. Just over 20 minutes long, it is hosted by Leonard Maltin and features interviews with Maureen O'Hara and others.

FINAL THOUGHTS:
Recommended. Though, granted, this is not on par with the best collaborations between John Ford and John Wayne, Rio Grande is a smartly put-together cowboy picture and not to be discounted. It's got action, romance, singing, humor--just a little bit of everything. Fans of The Quiet Man will appreciate more screen time with John Wayne and Maureen O'Hara, and more general fans of classic Hollywood will simply dig seeing a well-done effort from genuine cinema legends. 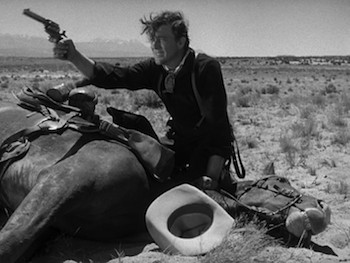 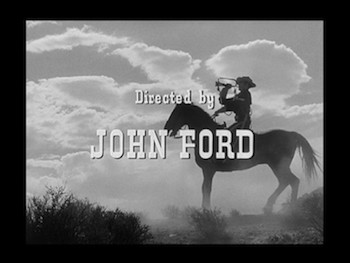