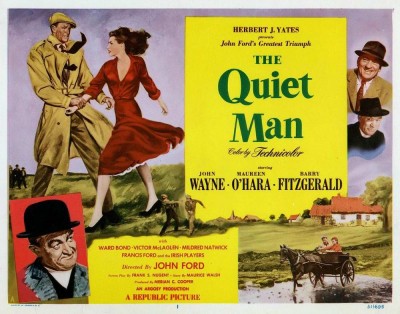 They sure as hell don't make movies like The Quiet Man anymore. I'm not even sure they made movies like The Quiet Man in 1952. It's a film so rooted in its old-fashioned values, both possessed and obsessed with bygone traditions, it may have even seemed out of touch in the days leading up to rock-and-roll and James Dean. Yet, it's also a contradiction, a meeting of two eras, a little of America for the Irish countryside. It's folksy, yet also ribald. It's lusty and romantic, yet politely adheres to ideas about love, courtship, and marriage that have long since passed.

John Wayne stars as Sean Thornton, a towering Pennsylvanian who is returning to Innisfree, the rural Irish town where he was born. He left when he was just a kid, and has since lost the rest of his family. A crisis of conscience has compelled him to return, a personal tragedy that has sent him in search of a quiet life. He is the Byronic hero, a pugilistic Heathcliff, retreating to the windswept hillsides to brood over his dark secret.

Not all is quiet in Innisfree, however. Sean is immediately struck by the crimson-haired beauty Mary Kate Danaher (Maureen O'Hara), a spinster who lives with her brother, the perpetually grouchy Will Danaher (Victor McLaglen). With the help of the local matchmaker, the genial Michaleen Oge Flynn (Barry Fitzgerald), Sean sets out to woo Mary Kate, despite her brother's protests. Will wanted the land that Sean bought upon returning, and he can't forgive the slight. Only through trickery does Flynn and some of the other townsfolk maneuver the union and even then, upon discovering the deception, Will denies his sister her dowry. Sean cares nothing for money, but his refusal to stand up to her big brother causes a rift between him and Mary Kate. He can't explain why he won't fight, and she can't see past what she believes to be her due. There will be no real marriage--meaning, no conjugal visits--until the imbalance is set right.

The Quiet Man was a bit of a dream project for all involved. John Ford made Rio Grande with the same cast two years prior to give the studio the guaranteed hit that they were hoping for. As respected as the production is now, apparently The Quiet Man was considered a risky proposition in the early 1950s, even with John Wayne's bankability. I guess the bean-counter wisdom was that audiences didn't want to see the Duke playing a man of conscience refusing to use his fists. Never mind that the movie culminates in one of the grandest fistfights in movie history, perhaps only rivaled by Gregory Peck and Charlton Heston in William Wyler's The Big Country. When Wayne and McLaglen finally go to town on one another, it's the epitome of a knockdown, drag-out skirmish. Best of all, Ford and future Searchers-screenwriter Frank S. Nugent (adapting a story by Maurice Walsh) build to it in a way that makes the character change believable. Sean earns his way back to being a fightin' man.

For as involving as that arc is, however, it's really Mary Kate that fascinates me. Maureen O'Hara plays her as a mercurial force of nature. Her emotions are big and her reactions to the circumstances she finds herself in are exaggerated. With her wide eyes and gaping mouth, she often looks as if she fears John Wayne is death himself. Having lived alone in a house full of men for many years, she has become as violent and prone to anger as the fellows, and she's more than able to hold her own against any of them (and will likely be the first to throw a punch). Only the Irish landscape seems to match her intensity. The winds blow and rage right alongside her. (Many amongst you probably first experienced The Quiet Man via Steven Spielberg; I remember finding the scene that E.T. watches on the TV kind of baffling when I was a kid. Where were those two people kissing? In a hurricane?)

Ford showcases Ireland with the same loving care as he was known to show the American frontier in his many westerns. Cinematographer Winton C. Hoch's early career as a cameraman on nature documentaries really pays off here. On their one date, Sean and Mary Kate travel across the green and pleasant land on foot, passing hillside churches and crossing babbling brooks. It's beautifully shot, with the Technicolor cranked to the most idyllic of hues. Yet, the camera is never obtrusive. More often than not, it's imperceptible. Ford doesn't indulge in any bravura zooms or pans. Like his romantic hero, he hangs back and keeps his mouth shut.

I'm sure there are many political (and politically correct) arguments to be had over The Quiet Man--from references to the IRA, or to the suggestions that a man is justified in beating his wife with a stick--but I don't care to hear them. Context is everything, and The Quiet Man exists in a nostalgic pocket universe all its own. It's one of the most romantic movies ever made, and every time I watch it, this old Grinch's heart swells several more sizes. Give me a couple of more visits to Innisfree, and I'm likely to burst!

Video:
Olive Films' highly anticipated Blu-Ray edition of Ford's classic does not disappoint. The image is finely rendered on this AVC-encoded 1080p transfer. Shown at a 1.37:1 aspect ratio, this disc was apparently made using a 4K scan of the original camera negative, and the result is a knockout. The colors are bold and bright, but they don't look false or over-saturated like they did on earlier home video releases. Excepting a few soft edges, the resolution is sharp, and the detail is solid, with a nice grain that lends the disc a cinematic quality without washing away the cinematography. The bright scenes look exceptional--as do the hotter colors, like Maureen O'Hara's fiery hair or her fire-engine red skirt--but the darker colors look nice, too--John Wayne's courting outfit, or the rainy skies that come at the end of the first date. The later scene of a weary husband and wife sitting silently by the fire offers excellent contrast between the burning flames in front of the couple and the darkness behind them.

All in all, this restoration is a real winner.

Sound:
A lossless monaural mix does a nice job of bringing the original audio to home theaters, dialing down any distortion and creating excellent volume levels that showcases the lovely music without drowning out the dialogue. I didn't hear any glitches, the whole track is clean.

Extras:
There aren't a lot of extras here: a thick interior booklet with material from Ford biographer Joseph McBride and a half-hour special on the film that was put together by Leonard Maltin and previously included on earlier home video releases.

FINAL THOUGHTS:
John Ford's 1952 love letter to Ireland is one of those movies that just gets better every time I see it. Or maybe I am just more capable of understanding it, of feeling it, the older I get. I know I didn't get The Quiet Man at all when we watched it in my 9th-grade English class, and it took some urging to get me to give it another go several years later. When I gave in, though, I was so glad I did, and now it's one of my favorites. John Wayne is at his best as the sad hero looking for peace, and Maureen O'Hara is delightful and mysterious as the woman who turns his head. The whole film has a down-home folksiness that is quaint without being antiquated. The small-town humor holds up really well, and though some of the social customs might be a little out-of-date, it doesn't matter one whit. The Quiet Man is an exceptional cinematic classic, and it looks astonishing on Blu-Ray. DVD Talk Collector Series.