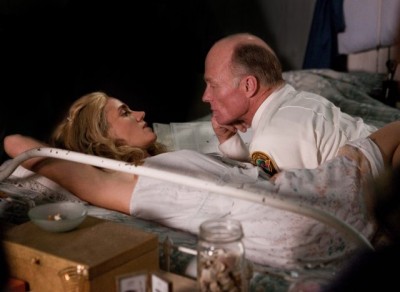 Dustin Lance Black's Virginia made its festival debut over a year and a half ago, at the 2010 Toronto Film Festival, and it's not surprising that it's taken this long to reach theaters; one can hardly imagine the suits and marketeers that populate most distribution companies managing to make heads nor tails of it. To be sure, it's a hard picture to pin down--it has the raw materials for a big, dumb farce (and it's mostly being promoted that way), but it stakes out a claim in altogether more interesting territory. It is shambling, and uncertain, and more than a little messy. But this is not a film that can be regarded passively; it involves you, piques your curiosity, engages your interest. I was never quite sure where the hell it was going, and that's something that doesn't happen nearly often enough anymore.

The picture is written and directed by Dustin Lance Black, screenwriter of Milk and J. Edgar, who is clearly relishing the opportunity to color outside the lines of a pre-determined narrative. He begins his film with sedate paintings of docile woodlands and small-town scenes, but he's more interested in what's happening inside those little cottages and behind those trees, and we're soon introduced to the title character (Jennifer Connelly) a single mother who's been having an affair for years with local sheriff Dick Tipton (Ed Harris). A fiercely Mormon family man, Tipton is running for the state Senate, and when that campaign begins to decrease the frequency of his visits to Virginia's house, she decides to fake a pregnancy to keep his attention. "Although I'm thinking maybe I got it from God, like Mary did," she confesses, "because I used rubbers every time."

Meanwhile (there's a lot of meanwhiles), her teenage son Emmett (Harrison Gilbertson) is in love with the sheriff's daughter Jessie (Emma Roberts), who wants him to convert to Mormonism before they can make out with the kind of abandon he would like. And then there's Emmett's boss at the local boardwalk (Toby Jones), who likes to dress in women's clothes, and his best buddy the hemophiliac babysitter, and the dry-cleaning lady who knows all and sees all, and...

You get the idea. What's intriguing about the picture is how frequently and steadfastly Black resist the urge to play it broad, or to poke fun. He takes these characters seriously, even when their actions are utterly ridiculous, and a result, the movie has a nimbleness that's rather unexpected. Instead of coming across as crass or low, it's got an odd, almost misty tone, a kind of no-rush, no-worry approach. Black employs mellow music and Malick-esque narration to tell his story, and lets the straight playing of the silly situations get the laughs.

Connelly's performance dominates the film, and it's a good one; she spits out her comic dialogue matter-of-factly ("Gimme my gun and go take my dress off right now") and while the character is clearly mentally unbalanced--an early scene finds her talking to a sink full of dishes, and not in that vague, abstract way that (I think) most of us do--she keeps the big acting moments in reserve, so that when the inevitable meltdown scene occurs, it is startlingly raw and exposed.

But Harris gives what may be the picture's most intriguing performance, alternating aw-shucks likability with real rage. He's running as a family values candidate while conducting an affair that's in his second decade, and instead of playing up that contrast, Harris instead hones in on those contradictions and hypocracies, finding and seeming to understand how this man can live with them and justify them. A little light S&M between lovers is fine, you know, as long as there's a good, sincere prayer beforehand. (Harris's wife Amy Madigan appears here as his onscreen spouse, and crafts a marvelous performance that is an terrific accumulation of small, sad moments.)

The film's oddball tone occasionally works against it; there are scenes that are clearly meant to play as comic (like an aborted bank robbery), but Black's comic timing is so sprung and off-balance that they sputter. There is some question, in the third act, as to whether Black's characters are losing control or he is; he's got so many plates spinning that some of them get mighty wobbily, and a few of the climactic scenes feel either incomplete or half-heartedly staged. The structural integrity of the picture isn't altogether sound either: we see clearly in the opening scene who Virginia's narration is spoken to, but Emmett narrates as well, to parties unknown. And the character of neighbor and confidante Betty (well played by Carrie Preston) is sketchy at best; she appears in the prologue and seems important, but disappears for an hour before returning primarily as an exposition dispensary.

So there are flaws, but it feels, in many ways, like the kind of film that can only stumble because its writer/director is taking real chances. Virginia is, by turns, scattershot, funny, uncertain, and tender. It is a genuine original--for better and worse.