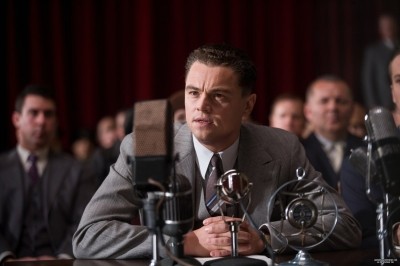 On the Venn Diagram of Oscar nomination probability, the titular role in J. Edgar has got to be something of a sure thing for Leonardo DiCaprio: slightly villainous, based on a real person, wide range of aging, secretly gay. If he were mentally or physically challenged, they might as well call off the ceremony. (He does have an occasionally surfacing stutter, so, nice try.) The film provides DiCaprio with the opportunity for some award bait, and it gives director Clint Eastwood the chance to make a big, sweeping biopic. Those are reasons enough for them to make the picture, I suppose, though they might not be reason enough for you to see it.

It's hard to get too passionate one way or the other about J. Edgar, which is a competently executed yet mostly uninspired piece of work. The screenplay is by Dustin Lance Black, who won the Oscar for Milk in spite of the fact that his script was that picture's weakest element; his primary organizational device here is Hoover's dictation of a biography, a trope even more shameless than the audiotapes that provided the earlier film's framework because this framework, it seems, is altogether fictional.

That complaint registered, the transcription of that biography allows Black to hopscotch between past and present, moving easily between the old Hoover of the '60s and the younger, somewhat romanticized version he wishes to present. (The transitional devices are seamless and shrewd, oddly reminiscent of similar shifts in Martha Marcy May Marlene.) Most importantly, they allow the film its one clear deviation from the countless other biographical pictures of recent years: eschewing an A-B-C chronology. There is precious (and thankfully) little of Hoover the little boy; his life was his time at the bureau, and the film isn't much concerned with anything else either.

Approximately equal time is allotted to his triumphs and his shortcomings. The sections dealing with the kidnapping of the Lindbergh baby, for instance, are so well done that we'd perhaps rather watch that film than this one. Considerable weight is given to his unreasonable and inexplicable targeting of Martin Luther King and the SCLC, though a sequence of Hoover lurking in the shadows, listening to the King sex tapes at the very moment he gets the call about JFK's assassination is a bit too grotesquely unseemly an image for the picture to bear.

That moment is downright subtle, however, compared to the material concerning Hoover's overbearing mother (Judi Dench); her scenes are, too put it mildly, a bit on the broad side. There is certainly some potent psychological material to be mined out of his lifelong attachment to her, and to her powerful hold over him, but it can be done more savvily than with a scene where she tells her son she'd "rather have a dead son than a daffodil for a son" and proceeds to teach him how to dance. A Dangerous Method doesn't have that much Freudian subtext, and it's about Freud.

Of course, that scene is tied up in what we're most interested in, and what Black's participation seemed to promise: the onscreen portrayal of Hoover's sexuality. (It was previously tackled, in passing and none-too-artfully, in Oliver Stone's Nixon.) As he's on the rise in the FBI, he takes on Clyde Tolson (Armie Hammer) as his right-hand man, and an affection clearly exists between them, but Black and Eastwood play coy about the exact nature of their relationship for so long that it almost becomes a tease. It's not that we need a more graphic portrayal, or for the filmmakers to make stuff up; we just spend too much of the film uncertain of who is what to whom.

What we can discern about the two of them is mostly provided by the loaded, longing looks Hammer gives DiCaprio. It's not a terribly modulated piece of work, but he does let us in--in his younger scenes, at least. His old age make-up is concealed for a good long while, though unfortunately not long enough; it's so heavy and voluminous as to render him facially immobile, leaving him only the option of overplaying the wheezy physicality and old-man vocal inflections. Neither he nor the make-up artists come off very well. Naomi Watts, as Hoover's long-time secretary, is more convincing in her aged incarnation, though aside from a couple of early scenes, she doesn't get a helluva lot to do beyond making entrances and exits. Smaller supporting performances range from credible (Josh Lucas makes a terrific Lindbergh) to laughable (Dylan McDermott's Jersey accent is comically bad; he literally says "New Joisey" at one point).

Ultimately, it is (unsurprisingly) DiCaprio's show, and it is a very good turn. His make-up is often overdone as well, but the sturdiness of his work mostly manages to pull the focus. He digs deep into the psychological complexities of this man, conveying the slow uncoiling of his petty vendettas, unearthing the birth of a bully. His germophobia and verbal tics serve as unfortunate reminders of The Aviator, but he manages to make this a fresh and accomplished turn, particularly in playing the unexpected (and rather poignant) direction that the film takes when the time comes to satisfy our curiosity about his cross-dressing.

So yes, it's a fine performance, but the picture can't quite measure up. It's not that J. Edgar isn't worth seeing. It is well-made, intelligent, staid; the cinematography is shadowy and evocative, the costumes crisp, the production professional (aside from Eastwood's score, which--as has been the case with much of his recent music--is too twinkly, too precious, too much). But it shares the quality of so many other biopics: it is sorely missing the crackling electricity of real life happening. It is like watching history rather than watching life unfolding, and when it's over, we close the book and carry on.